Amandla Stenberg - "Sometimes I Feel Like A Boy When I Wake Up": Sneak Peek At BUST’s June/July 2017 Issue

Details
BY BUST Magazine
IN Feminism
Published: 23 May 2017 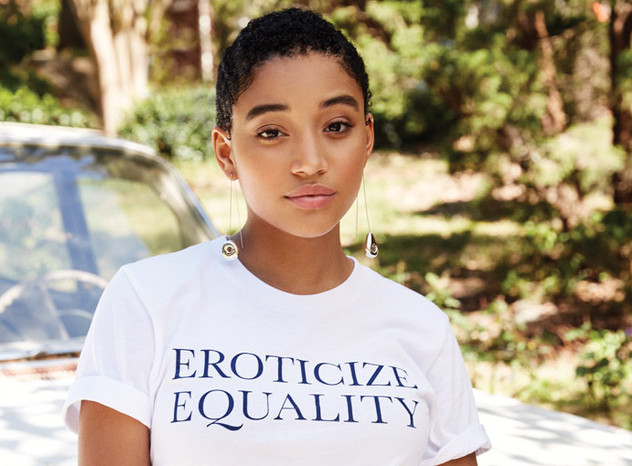 Here at BUST, we’ve had our eye on Amandla Stenberg ever since she made us cry as Rue in the Hunger Games back in 2012 - and we were all in when her video about cultural appropriation, “Don’t Cash Crop On My Cornrows,” went viral in 2015. We’ve featured her in BUST’s Broadcast section before, and now we are beyond thrilled to have her on our cover for our June/July 2017 issue.

In our interview, Amandla talks about her nonbinary gender, growing up in the spotlight, why her new film Everything, Everything is so important, and much, much more. See a few of our favorite quotes below, and pick up BUST on newsstands beginning May 29th (or subscribe!) to see the full 10-page cover story. 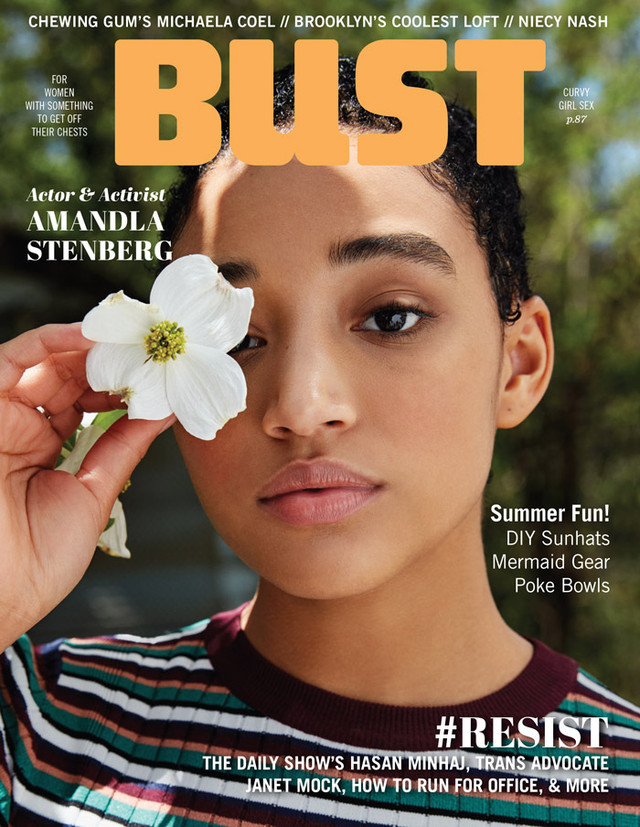 “The term ‘non-binary’ is something I identify with, in the sense that I do feel like I am a woman, I love my body, and I love that it looks like a woman's body. But when it comes to my gender, I feel like it shifts all the time. I don’t necessarily want to use the words boy or girl, but those are the words that we have in our toolbox, so sometimes I feel like a boy when I wake up. Sometimes I want to wear clothes that make me look more ‘girly.’ In many ways, I think that has nothing to do with my body and everything to do with it at the same time. I know, it’s kind of confusing. But I think it’s confusing because the constructs don’t make any sense.”

On the racist backlash after she was cast as Rue in the Hunger Games at age 12:

“That was definitely my first experience with racism that was that direct. And I didn’t understand it at first. It was very disconcerting, and I think it was one of the first times in my life that I experienced kind of watching things from outside of my body. After a while, I understood that it had nothing to do with me in many ways, but rather was a product of a larger systemic racism. I think the most frustrating thing about the whole debacle was that the character is written as black and it’s just even more telling that when people read these books they tend to skip over any indicators that these characters are people of color, and instead automatically assume they’re white.”

“I definitely consider myself a feminist. I don’t really consider myself a ‘pop culture feminist,’ that certain brand of feminism that I think we're seeing a lot of nowadays. But of course, I love women, I am a woman, and I believe in the equality of the sexes. It’s one of my most foundational morals. And if feminism isn’t intersectional it isn’t feminism. Feminism should include every single type of woman. It should include trans women, it should include all women of color, poor women, fat women...if it’s not inclusive, then it’s not fighting for women, it’s fighting for specific groups, for privileged groups, and that isn’t very revolutionary at all.”

On why she uses a “dumb phone”:

“I got rid of my smartphone, I couldn’t do it anymore...It’s been such a relief just not having a smartphone. I’m legitimately concerned about my generation and how phones are going to affect us psychologically. I’m not like a super anti-phone, anti-social media person, obviously - I think it’s a very important tool. But at the same time, I think it can create some serious effects on our mental health.”

Amandla Stenberg, From "The Hunger Games" To Intersectional Feminist Superstar