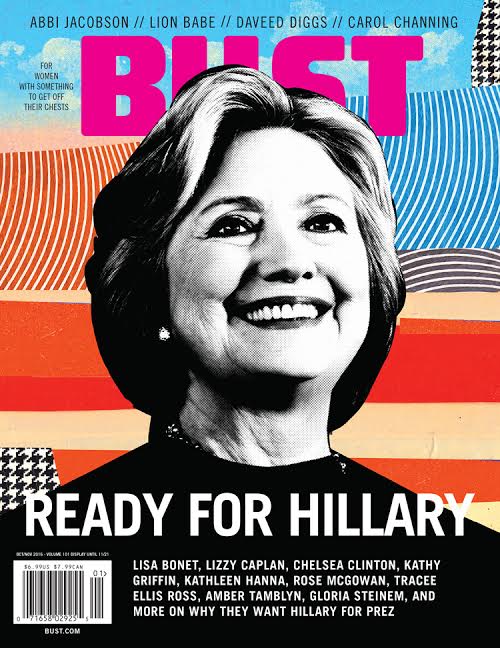 As feminists, representation really matters to us. That’s why we started BUST in the first place, to showcase real women—smart, funny, cool, complex women—at a time when the media completely ignored them. And though it’s been a very heated election cycle, even here at BUST HQ—our staff contained both passionate Bernie and Hillary supporters all the way up through the primaries—we are now united in our belief that in the current field, Hillary is the best man for the job.

She has her critics, and it’s true, she’s not perfect; no one is. But the blatantly sexist witch-hunt that’s been perpetrated against her for decades only makes us want to support her more. She’s a fighter, a survivor, and a badass bitch, just like most of our female friends and colleagues. And this ability of hers to rise above the petty prejudices of America’s male-dominated political system to create real change is a quality that will make her not only a great president, but also an especially great president for women.

As a former first lady and secretary of state, she’s more experienced in diplomacy than any other previous candidate, and she’s a damn good politician. She’s going to protect our Supreme Court, keep abortion legal, and fight for stronger gun control laws. We’ve had men running the show for 227 years. Now it’s time to see how (an incredibly well-qualified) woman does. We're betting she’s going to be great.

- With four years as Secretary of State and eight years as Senator, Hillary Clinton is one of the most experienced politicians to ever run for president

- Clinton's platform includes fighting for the equality for the LGBT community.

- Clinton wants stronger gun control and has promised to expand background checks and take on the gun lobby.

- Clinton wants to work on immigration reform with a path to citizenship — no wall-building.

- Clinton recognizes the US has a long way to go towards ending racism — and wants to work towards that goal.

- A third party candidate has never won a presidential election in the United States — or even come close.

- Again and again, Donald Trump has proven that he's anti-woman, anti-choice, anti-black, anti-Latino, anti-immigration, anti-Muslim, anti-LGBT, anti-everyone-who's-not-a-straight-white-wealthy-cis-man. And Hillary Clinton is our only hope to beat him.

What Do Lisa Bonet, Amber Rose, And Kathleen Hanna Have In Common?

How Well Do You Know Hillary Clinton? Take The Quiz!