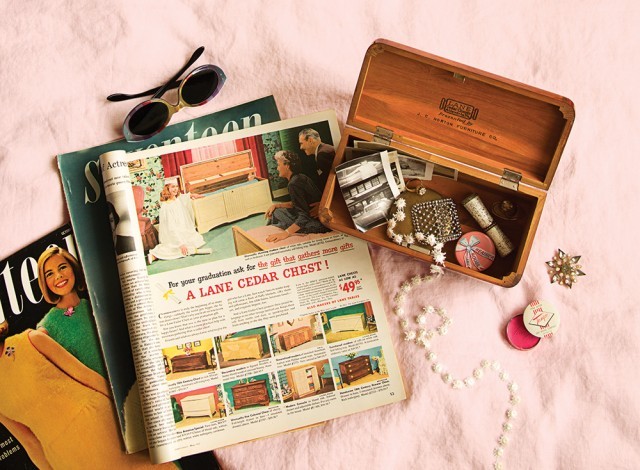 Leave it to an American company to take an Old World tradition and market it to the masses with the appropriate ballyhoo. After World War I ended in 1918, the Virginia-based Lane Company applied the same techniques of mass production it had used to build pine ammunition boxes during the war to its peacetime output of cedar hope chests. A hope chest was a trunk that held a girl’s “trousseau”—aka the bed linens, clothing, and other personal and practical items a young woman would need when she married. The custom came to the United States from Europe around the 18th century, a variation on the wedding chest that moved with the bride from her parents’ house to her married home, and was a remnant of the ancient custom of dowry.

Cedar was particularly practical for the storage of linens and clothing, as the wood’s distinctively scented natural oils helped protect the chest’s contents from the ravages of fabric-eating moth larvae. But sturdy practicality alone was not enough to sell goods nationally. Beginning in the 1920s, Lane used an aggressive mash-up of consumerist desire and romantic fantasy to advertise its product in the pages of general interest and women’s magazines. A Lane hope chest thus became “the gift that starts a home,” designed “to hold fragile wisps of dreams until those dreams come true.” Ads urged parents and boyfriends to buy that special young lady in their life a “Sweetheart” chest.

Not every Lane ad was candlelight and roses, however. In 1938, Lane resorted to scare tactics usually reserved for advertising mouthwash, explaining that surveys (unreferenced, of course) indicated “the chances of a marriage ending in the divorce court…doubled when the bride has no hope chest,” apparently because young women who showed a knack for planning ahead made better wives.

But Lane saved the hardest press for high school girls. As part of its “Girl Graduate Plan,” beginning in 1930, the company arranged for local furniture stores to give miniature “Lane Sweetheart Cedar Chests,” or a certificate good for one, to entire classes of graduating high school girls, “thus introducing them to the Lane name just at the age when they are likely to become brides,” according to a 1968 business magazine article. A lesser investment in room space, the mini chest could sit on a girl’s dresser, filled with trinkets, a reminder of the day when her parents or beau gifted her with the full-sized version. Lane claimed that by the 1960s two thirds of all female graduates in the country had been given a miniature hope chest, a figure that seems highly inflated.

Lane’s hyperbolic advertising campaign faded by the late 1960s, right around the time the women’s liberation movement took hold. The girl graduate program, however, continued well into the 1980s at least. As the existence of a few small but rabid online collector groups attest, the miniature chests grabbed the imagination almost as strongly as the marketers hoped.

No Men Allowed! Inside The Glamorous Doors Of The Barbizon Hotel

The Iconoclast Installation Artist You Need To Know About

4 Brilliant Women Whose Husbands Got All The Credit