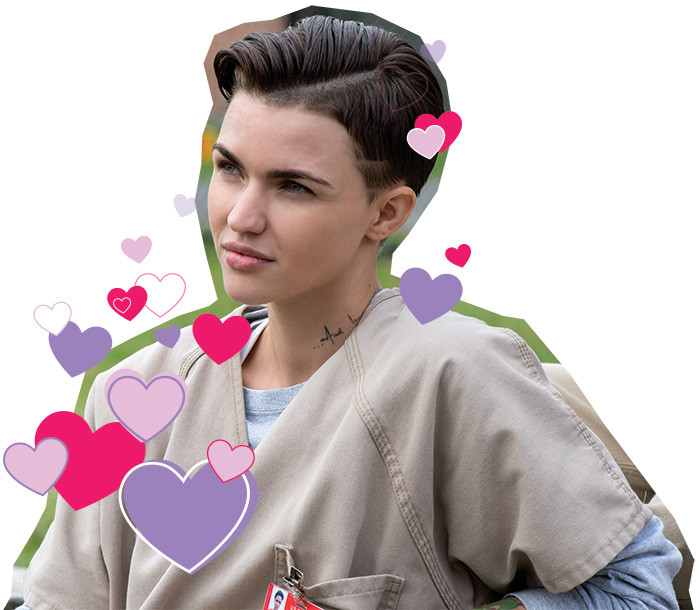 When genderfluid model/actor Ruby Rose hit the mainstream on Season Three of Orange is the New Black, the Internet exploded with lust, and the reverberations are still being felt months later. Her piercing eyes, edgy haircut, ample tattoos, and languid swagger have tingled the nether regions of nearly everyone with a Netflix account. Straight women everywhere announced online that they would “go gay” for the statuesque and Bieberesque Rose. And as expected, the LGBTQIA community reacted with Ye Olde Internet Outrage.

It’s certainly a concern when people who haven’t lived the reality of struggling with sexuality and gender identity, coming out, and facing adversity, minimize the experiences of those who have. The implication that sexuality is a choice backpedals the strides made by the queer community to educate the public that we’re born this way. And another thing—since Rose identifies as gender fluid, that means she’s* neither (nor any) gender. (*Female pronouns are commonly used to refer to Rose, who approves.) By that rationale, someone attracted to her wouldn’t necessarily be “homosexual.”

Rose herself has gone on record saying that she’s not bothered by the straight-girl crushes. In fact, she thinks all forms of visibility and acceptance for the queer community are positive. That’s comforting to hear. Could there be room in an inclusive, non-binary view of sexuality for identities like, “I’m straight but I want to have sex with Ruby Rose”? Especially since maybe some of these women are tiptoeing toward their true identities? I ask because this applies personally to me.

I should specify, I’d rather be Ruby Rose than do Ruby Rose. As a late bloomer still figuring out my sexual and gender identity (which are, of course, two separate issues), I find Rose to be a big boost of inspiration. From the moment I caught wind of her I found myself pinning photos of her haircuts, and picturing myself with shorn locks. I recently bought a suit, wore it to a wedding, and got lots of compliments. I’d never felt hotter!

Rose isn’t wholly responsible for my explorations. I’ve been thinking about how I represent my gender for a long time. Sometimes I feel like I’m in drag in super-girly clothes. I feel sexier with armpit hair. I also feel sexier with eyeliner on. As a person who identified as bisexual when that was one of only three options, I’m warming up to this pansexual label.

But even a label that encompasses “everything” or “neither” is a label. Writing this, I potentially open myself up to the same backlash from the queer community that labeled Rose’s new female fans “tourists.” Some could say I’m “bi-curious,” or that I’m conflating gender and sexuality. It's fear of this kind of judgment that keeps me inching out of the closet. I know I’m queer. And though I’m struggling, I’m trying to keep it light. Not taking things too seriously might be the true lesson I gain from Ruby Rose.

Tags: Broadcast , from the magazine , Orange is the New Black , OITNB , ruby rose , Feature Friday , pop tart
Support Feminist Media!
During these troubling political times, independent feminist media is more vital than ever. If our bold, uncensored reporting on women’s issues is important to you, please consider making a donation of $5, $25, $50, or whatever you can afford, to protect and sustain BUST.com.
Thanks so much—we can’t spell BUST without U.