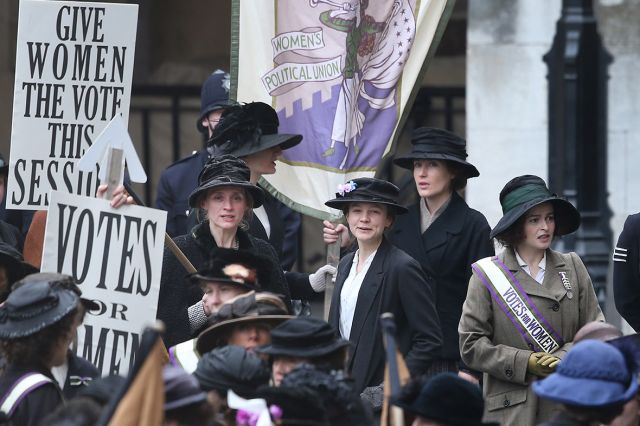 In Suffragette, Sarah Gavron and Abi Morgan’s powerful film about women’s struggle for the vote in England, Maud Watts, beautifully played by Carey Mulligan, is imprisoned for her part in the movement. Battered and force fed, the brutal treatment of the suffragettes was meant to break their spirits and end the burgeoning women’s rights movement of the early 20th century.

But the suffragettes would not be broken, and when Maud leaves her cell she has etched “DEEDS NOT WORDS” into the prison wall as a reminder to never again fall for the beautiful lies the politicians had told them in promising women the vote and then reneging on their word

Almost precisely a century later, in a curious corkscrew of history, we find ourselves in similar waters. Seduced by packaged lies designed to keep us anesthetized while in a perpetual holding pattern. The Equal Pay Act... Title IX...The Pregnancy Discrimination Act... Title IIV... The Lily Ledbetter Fair Pay Act... Statutes, decrees, regulations, laws, acts - and yet still no action.

Acres of words and still no equality. American women need deeds, not words.?

At the Toronto International Film Festival, where I spoke at a Google sponsored panel on “Uncovering Unconscious Bias,” I saw two films.

In the first, Catherine Corsini's French film Summertime (La Belle Saison), I witnessed the thrill of the women’s liberation movement of the seventies through the eyes of a young farm girl who goes to Paris for the first time. 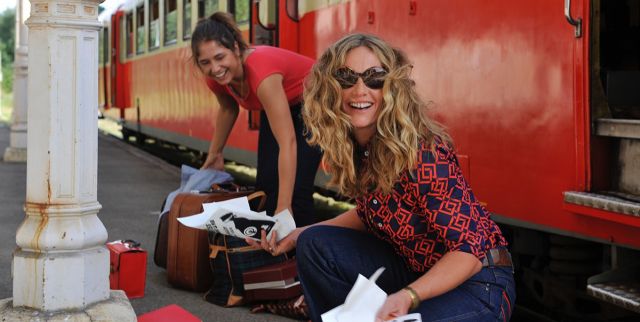 The wild gorgeous rabble of women sang militant feminist anthems, chain-smoked filterless cigarettes, smacked men on the ass and threw raw meat at those who would oppose their reproductive rights. They were a rowdy sisterhood unhindered by Spanx or concern about whether their men would find them too hairy. They were like the Musketeers, only there were many many more of them. I am lonely for that.

In the second film I saw, The Dressmaker, a truly original black comedy, executed with a flawless aesthetic by the great Jocelyn Moorhouse, Judy Davis and Kate Winslet experience vile and underhanded treatment by a powerful yet ridiculous man. Ultimately they make things right using a winning combination of feminine wiles, haute couture, hash brownies and ultra-violence.

There is a cool cross-generational sisterhood in The Dressmaker — something we need to cultivate in order for women in the film business (as in everywhere else in our society) to achieve equity. And we are going to have to start taking some actual steps. Make some actual moves instead of tap dancing around the matter.

Anna Serner, CEO of the Swedish Film Institute, spoke on a TIFF panel called “Financing Female-Led Films.” The dreary stats (getting worse btw) were laid out before us like dead fish rotting in the sun - 1.9% of studio films made in 2014 were directed by women, 28% of the roles go to women, female characters are twice as likely to be seen in explicit sexual scenes as males, etc. etc. 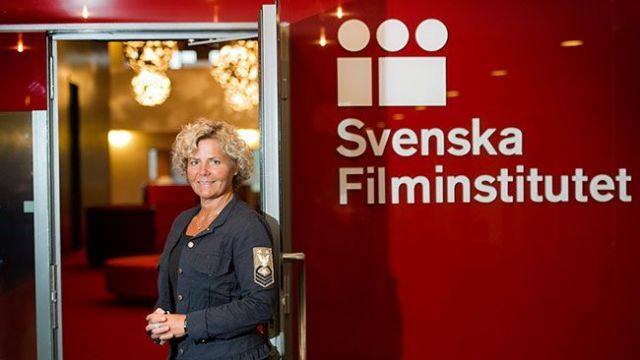 The whys and wherefores, along with the “studies,” “focus groups,” “research,” and other code terms for ineffectual activity and BS, fly fast and furious in Hollywood. There is so much activity, in fact, that a layperson might imagine something is actually occurring.

Here’s the thing, though — it turns out that you must actually want women to achieve parity in order for it to happen.

So Anna asked us the central question: Do you really want change for women in media?

My stomach dropped because frankly, the Devil on my shoulder says we could give a rat’s ass. But let’s say, for the benefit of the doubt, that we do agree that having more than a maximum of 17% participation by the majority gender in the field that creates the cultural future of the nation and the world would be a good thing.

How about we DO something about it?

Here’s how they're doing things in Sweden - thanks in great part to Anna’s leadership and initiative.

They set goals and then made up a timeline. They gave themselves target dates to hit and executed their plans. If they stumbled, or hit a roadblock, they reassessed their strategy and adjusted their course. When the theory wasn’t playing out on the ground, they kept working it until it did.

Now, in order to get an A rating in Sweden, a movie must pass the so-called Bechdel test, which means it must have at least two named female characters who talk to each other about something other than a man.

[Apparently the entire Lord of the Rings trilogy, all Star Wars movies, The Social Network, Pulp Fiction and all but one of the Harry Potter movies fail this test.]

Oh and yeah, 80% of the films at TIFF this year from Sweden were directed by women.

Kamala Lopez is an actress, filmmaker and activist with a degree in Philosophy and Theatre Studies from Yale University. She has appeared in over thirty feature films, including Born in East LA, Deep Cover and I Heart Huckabees. Her directorial debut feature "A Single Woman," about first US Congresswoman Jeannette Rankin won the Exceptional Merit in Media Award from the National Women's Political Caucus. Her Spanish language short film Ese Beso won the 2013 Senorita Cinema Jury Prize as well as the Audience Award at the Boyle Heights International Latina Film Festival.

Kamala is the President and CEO of Heroica Films, the Founder and Executive Director of The ERA Education Project and writer/director/producer of the upcoming documentary on the status of women in America, Equal Means Equal. She was named one of the 21 Leaders for the 21st Century and is Los Angeles County’s 2015 Woman of the Year

The 'Suffragette' Trailer Has Us Counting Down The Days Until October

Amy Schumer And Emma Thompson Call Out Ageism in the Media