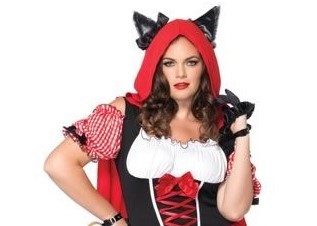 Every year around this time, the feminist-osphere goes all to pieces about how many women's Halloween costumes are all about being sexy (sexy ebola nurse, anyone?), and how many more women will dress up as "sexy cat" this year than, say, Grumpy Cat.

But while I'll admit that the sexy Halloween costume idea is a bit uninspired, I completely understand why women do it. I mean, who can blame them? Halloween is the only day of the year where no one can be slut-shamed. It's a slut-shaming free zone. On Halloween, everyone receives a "Get out of slut-shame free" card.

Look, every woman and girl knows what to do if she wants male attention. We've been schooled on this our entire lives—from magazines, from movies, from TV, from porn. And for many gals, getting male attention while out at night can be very appealing. However, most of us have also learned that if we go out in the kind of over-the-top sexy garb that men are most responsive to, we open ourselves to danger, and to critique. We will be looked at as sluts. We will be sneered at. We will be thought to be dumb, brainless. We will be considered an object, a thing; easy, used-up, loose.

As a result, many women forgo the male attention and stay within the strict patriarchal lines that will keep them just this side of the "slut" label. But that doesn't mean that it's not annoying/painful to be passed over for someone who is presenting herself in exactly the way that "good girls" aren't supposed to. It's that fucked up madonna/whore dichotomy; you're damned if you do dress sexy; and you're  damned if you don't.

And what joy it must be, to pull out all the tricks you already know, have known, have memorized, for that one shining night on which you are allowed to be as sexy as you want to be, without any repercussions. Hike up the skirt. Put on those thigh-highs. Grab some high-heels; the highest-heels. Lots of makeup; loads of lipstick. It's not like you didn't know what to do all this time. It's not that you didn't want the male attention, either. It's that you kept yourself from "going there" because you know what would happen if you did.

So gals, I understand why you want to be Sexy Dorothy from the Wizard of Oz; or a Sexy Panda Bear, or a sexy anything. And I'll defend your choice to do so. But I do hope that you're aware that the fact you feel you can only do this on Halloween, and not just whenever you want to, is fucked up. It's a fucked-up thing that you should try and dismantle. You should fight and take apart. Don't slut-shame other women. Don't put up with men slut-shaming women you know. Be a feminist. Yes, be a feminist. A goddamn sexy feminist.