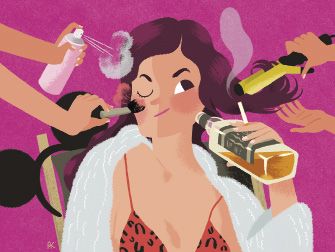 It’s become a well-traveled path for young women in Hollywood. Step One: Achieve teen megafame by landing a breakout role in a Disney project, being a Svengali-managed pop star, or both. Step Two: Get caught doing something deemed “inappropriate” for your wholesome celebrity brand, even if it’s something plenty of people do in their late teens or early 20s. Step Three: Weather a shitstorm of disapproval with public apologies and/or court appearances. Then repeat Steps Two and Three until you either become a train wreck, retreat from the spotlight, or, if you’re lucky, transition into an adult career, where tabloids show you with a baby bump instead of a bong.

This route’s been taken by the likes of Lindsay Lohan, Britney Spears, and Miley Cyrus, and it’s the route that Vanessa Hudgens seemed to be on until she starred in Spring Breakers last March with Selena Gomez and Ashley Benson. The three played college students who sneak down to Florida with stolen cash and party their perfect butts off. They swig Jack Daniel’s, trash hotel rooms, and give awesomely inappropriate performances worthy of a cell phone video, but in this case they’re on the big screen, in a critically acclaimed film directed by Harmony Korine. It’s art, bitches!

For Hudgens, best known as the girl from High School Musical whose private nude photos keep getting leaked online, appearing in Spring Breakers was a shrewd move—a way to turn the smudges on her career into intrigue. And for Gomez, whose good-girl rep is mostly unblemished, the film made her image more interesting than her Sears commercials. These days, the careers of so many young women in entertainment begin under the weight of pressures to be “a good role model.” So the opportunity for stars like Gomez to change their image on their own artistic terms is progress, right? Shouldn’t their fans get a chance to see their squeaky-clean pop idols evolve, reveal other dimensions, and show that they can be more than just pretty faces and nice personalities?

Yeah, but while “interesting” is an improvement over “cute,” it’s creepy that the world is so interested in seeing America’s sweethearts cross over to the dark side. In March, it was all about Gomez boozing it up on the big screen, and in June, it was Emma Watson pole-dancing in The Bling Ring. Before that, there was Mila Kunis performing oral sex in Black Swan, and so on, going back at least as far as Elizabeth Berkley ditching Saved by the Bell for Showgirls. Back in ’95, Berkley’s casting was considered a sleazy stunt; now it’s a rite of passage for a young female actor to play a murderous hooker or a villainess dancer or a topless bank robber, as long as the movie is clever or arty enough to be considered a serious endeavor.

You can’t blame actors for wanting to go against type and be edgy. But for many young women, edge is anything that isn’t classic good-girl behavior, and in going beyond it they risk “going too far” without getting anywhere. While Gomez didn’t have to apologize for Spring Breakers, she still felt obligated to warn her preteen fans not to see the movie. Never mind the R rating; somehow the youth of America are still her responsibility.

As long as Hollywood courts young demographics and tries to juggle “family values” with stardom, celebs will continue to go “wayward.” It’s a source of entertainment all its own. Still, as more fresh-faced teen idols stray off the course, maybe their impressionable young fans will finally understand what a good girl really is—just a role, one that no woman should have to play forever.

Tags: from the magazine , Hollywood , celebrity , Selena Gomez
Support Feminist Media!
During these troubling political times, independent feminist media is more vital than ever. If our bold, uncensored reporting on women’s issues is important to you, please consider making a donation of $5, $25, $50, or whatever you can afford, to protect and sustain BUST.com.
Thanks so much—we can’t spell BUST without U.