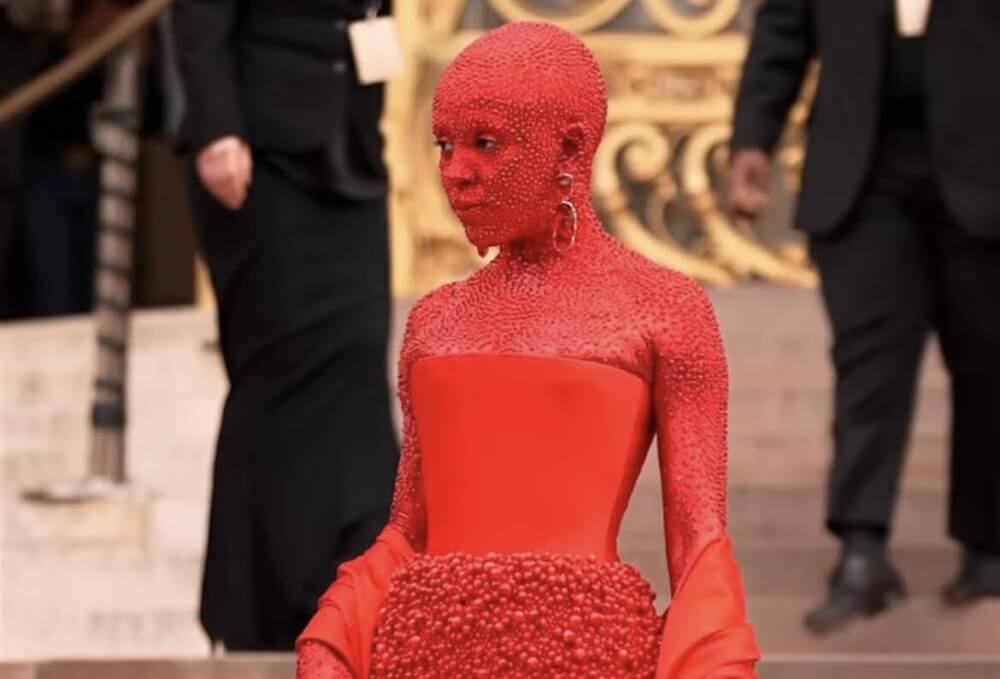 Paris Haute Couture Fashion Week shows the world’s top fashion houses competing with one another as they put their most attention-grabbing and rule-breaking designs on display, and the star-studded front row of each show generally includes the same. Expensive, innovative, and over-the-top aesthetic choices characterize celebrity Fashion Week appearances, but Doja Cat truly went above and beyond. Covered literally from head to toe in red crystals, the “Woman” singer commanded everyone’s attention when she arrived at Schiaparelli’s Couture Spring-Summer 2023 show at the Petit Palais on Monday, the opening event of the biannual Paris Haute Couture Fashion Week. The show featured Schiaparelli’s latest collection, “Inferno Couture,” inspired by the nine circles of hell outlined in Dante’s Inferno, which gives context to Doja Cat’s fiery look. The ensemble, custom-designed by the fashion house’s creative director Daniel Roseberry, featured a silk bustier, a fitted skirt adorned with lacquered wooden beads, a long wrap hanging from her arms, and a sultry pair of boots to match, and has been dubbed “Doja’s Inferno.”

The focal point of the look, which has had social media in a chokehold since the artist’s arrival in Paris, was the 30,000 hand-applied Swarovski crystals that left not even an inch of her uncovered. This was the work of legendary makeup artist Pat McGrath, who expressed her admiration of Doja Cat’s commitment to the creation of the look – a four hour and 58-minute commitment, to be precise. The process included covering Doja’s hair in caps, followed by painting her skin before McGrath and her team of professionals applied each individual crystal to her body.

Considering Doja’s beginnings as a viral meme sensation and reputation for goofy social media antics, it’s unsurprising that the Grammy award winner has once again become the subject of endless Twitter quips. Since the first photos and videos from Paris Fashion Week hit social media, the memes poking fun at and admiring her innovative visual statement have been abundant. Twitter users found it especially comical when juxtaposed with Kylie Jenner’s outfit choice for the event, a pre-release from the Schiaparelli collection on display, which featured a faux-taxidermy lion head attached to her dress.

Doja Cat judging Kylie Jenner's look is all of us. pic.twitter.com/PRuYZnOuDm

There were also jokes about the look’s similarity to the appearance of Vegas performers the Blue Man Group - bald and monochromatic - which led to the group itself making a post accepting Doja Cat as one of their own.

As prevalent as the memes, however, is the admiration for Doja Cat’s continued commitment to serving looks that set her apart from the rest, earning her “icon” status among fashion critics and pop music fanatics alike.

One thing about Doja Cat, she will have her own chapter in the history of Fashion Week pic.twitter.com/JTj5AuKDlc