Jennifer Coolidge Won this Year’s Golden Globe Awards, Plus 13 Feminist Moments From the Ceremony that Made Us Smile 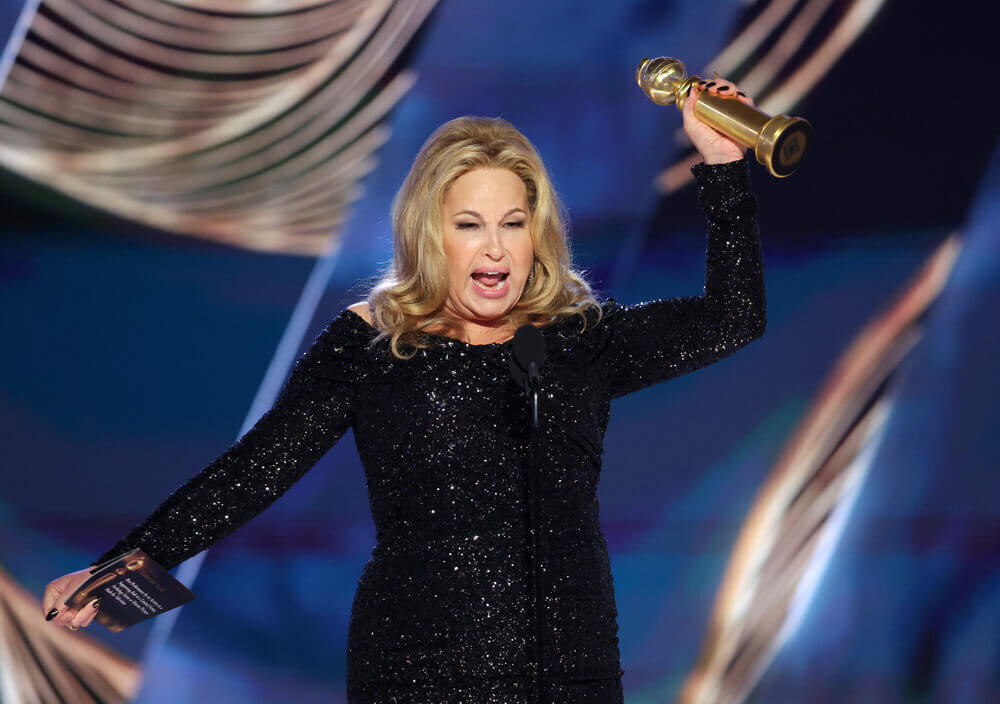 From Jennifer Coolidge’s heartfelt and hilarious acceptance speech, to Laverne Cox’s impressive red carpet interviewing skills, women ran this year’s Golden Globe Awards. Here are some moments that made us say, “thank you to the Hollywood Foreign Press”:

Jennifer Coolidge winning her first Golden Globe for her role in HBO’s The White Lotus. In her speech, Coolidge thanks show creator Mike White and states that because of him, she’s finally being invited to her neighbor’s parties.

THE Dolly de Leon, THE First Filipino Golden Globes nominee holding her fucking beer and relx vape in one hand is SO FUCKING ICONIC. She’s so MOTHER. She’s so me. pic.twitter.com/kcnVvbTyym

If you watch just one moment from the Golden Globes let it be Regina Hall accepting Kevin Costner's award on his behalf.pic.twitter.com/8GqXBQnc4F

The newest scream queen and Wednesday Addams herself, Jenna Ortega talking about that insanely viral goth dance sequence and her upcoming film, Scream 6.

Angela Bassett being the first actress to win a Golden Globe for a role in a Marvel movie. Basset played Queen Ramonda in Black Panther: Wakanda Forever. In her speech, Bassett remembered the late Chadwick Boseman, stating, “We have joy in knowing that this historic Black Panther series is a part of his legacy that he helped to lead us to. We showed the world what Black unity, leadership, and love looks like beyond, behind, and in front of the camera.”

Laverne Cox running the red carpet. Check out some of her highlights in this video, including an interview with first-time Golden Globe nominee Sheryl Lee Ralph on her iconic Emmys acceptance speech.

Ryan Murphy shouting out MJ Rodriguez, who became the first trans actress to win a Golden Globe at last year's canceled ceremony for her role in the FX series Pose. She finally received her well-deserved standing ovation!

Quinta Brunson winning Best Actress in a Musical or Comedy TV Series for her role in ABC’s Abbott Elementary. In her speech, she gives a loving shoutout to her family group chat named “The Butts”.

The majority female-led cast of Abbott Elementary also won the Golden Globe for Best Television Series - Musical or Comedy! In her second speech of the night, Brunson gets distracted by Brad Pitt. (And we definitely get it).

Michelle Yeoh winning Best Actress in a Musical/Comedy Motion Picture for her role in Everything Everywhere All at Once (rightfully) reclaiming her time during her acceptance speech. In her speech, Yeoh refers to getting to play the role of Evelyn Quan Wang as “the most amazing gift”.

Not necessarily feminist, but Mike White’s drunken acceptance speech, calling out all the members of the audience who passed on his project The White Lotus, is just the best. We *heart* him so much.

Honorable mention: This photo of Jamie Lee Curtis being just as excited as we were seeing Michelle Yeoh win.

A picture is worth a thousand words. #GoldenGlobes pic.twitter.com/hfkCpvrQsE