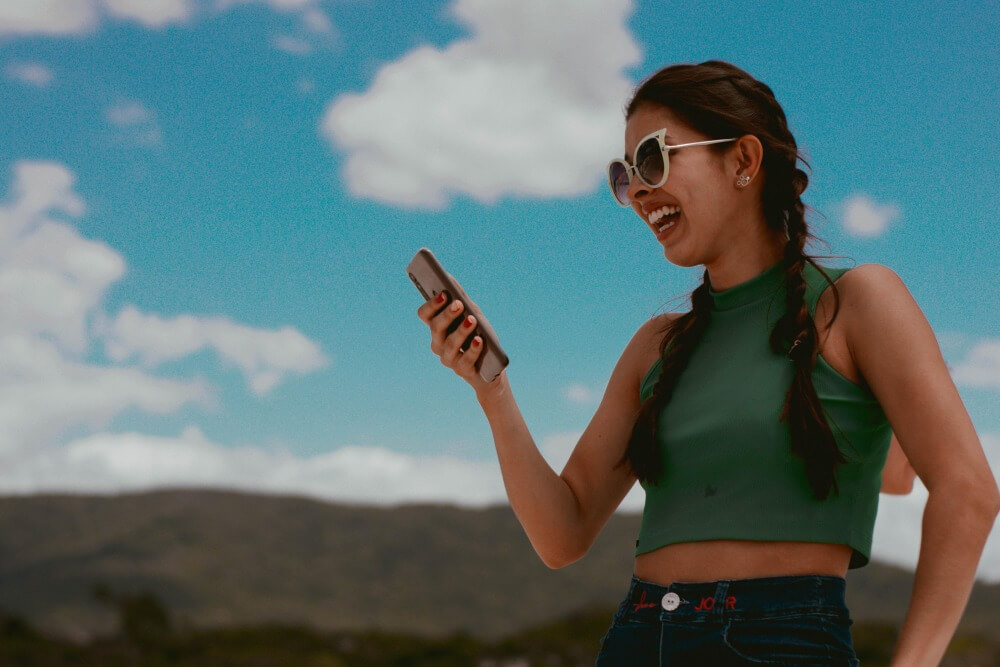 Ditch the doomscrolling and give your timeline a refresh by following these funny feminist content creators.There is just too much content on social media, and it can sometimes feel overwhelming. It's exhausting sorting through all of the negative news stories, misinformation, and hateful rhetoric that seems to be constantly swirling through the internet. Give yourself a break from the madness and have a laugh with these hilarious comedians and content creators.

Ziwe Fumudoh is a comedian and writer known best for her sharp interview style and her half-hour variety Showtime show, Ziwe. Her TikTok is full of short clips from her show including original songs, sketches, and of course, celebrity interviews. Ziwe is a master of uncomfortable silence and satire known for putting her guests on the spot. She provides a refreshing break from the typical talk show format that is men in suits asking softball questions with rehearsed answers. Her content masquerades as absurd and silly, but underneath it is sharp social commentary.

You'll notice the overall aesthetic of her variety comedy show is almost hyper feminine--complete with an all-pink set, flawless makeup, and sparkly jewelry. Ziwe stated in an interview with ELLE that this is done intentionally to make a statement: that feminine and intellectual can exist in the same space. She explained, "...as I grew up in entertainment and as an artist, I noticed this consistency where the most intellectual women are sort of desexualized and masculinized. They wear pants and suits and glasses to seem smart...I really wanted to play with the idea of, is there a world where a female Black woman intellectual could be hyper feminine? Does that exist?"

Catch up with Ziwe on her TikTok, Instagram, and Twitter, and watch season two of her namesake series streaming on Showtime.

White, cishet, men have been able to spew their unchecked opinions on how women should dress, look, and behave for...well, for forever. They're even applauded for it, to the point that there are entire podcasts where the premise is men criticizing women for essentially just existing. Drew Afualo is finally here to give them a taste of their own medicine. Afualo first gained notoriety on TikTok for her apt and (rightfully) brutal critiques of misogynists leaving hate-comments about her appearance on her posts. She has built a platform by publicly humiliating and roasting incels, body-shamers, racists, and bigots with a gleeful delivery that is equal parts cathartic and entertaining. In an interview with HUFFPOST, Afualo described her content by saying, “I just make fun of terrible dudes on the internet, which is a real short synopsis of it. The longer-form version would be that I essentially just stick up for women and many other marginalized groups…and turn the tables when it comes to bigotry that’s so casually consumed online.”

Afualo has gained a substantial following across her social media platforms and is now hosting her own podcast called The Comment Section with Drew Afualo, while still regularly posting on her TikTok, Instagram, and Twitter.

So, the next time you’re forced to remember Andrew T*te exists, scroll through some of Drew Afualo’s content instead. It is almost guaranteed to make you feel better.

Michaela Okland is the mind behind SheRatesDogs, a page dedicated to giving women a space to share their negative experiences with dating men. Okland posts screenshots sent to her of DM’s that young women have received from men that range from creepy to downright criminal. Maybe you recognize her account from when Chris D’Elia was accused of pursuing underage girls. Some of the girls and young women who came forward reached out to SheRatesDogs to share their experiences with D’Elia and the resulting Twitter thread of stories and screenshots briefly went viral.

The site has evolved a bit since its inception. Okland says on her website that SheRatesDogs was originally intended to be, “...a fun platform for girls to share their past shitty and laughable experiences in the dating world.” The response was overwhelmingly positive and the page became a safe place to get reassurance and support in a dating world that is constantly telling women they’re “crazy” or overreacting to the poor behavior of the men they’re dating. As funny (or cringey) as the posts SheRatesDogs share are, they’re also making a positive feminist impact. Find them on Twitter, Instagram, and TikTok.

Chelsea Hart is a nonbinary comedian, podcaster, and content creator. Originally from Alaska, Hart moved to England to pursue their love of music by performing opera on the streets of London, but fell in love with comedy along the way. They have since moved to New York where they host their own podcast, Resensitizing, perform standup comedy, and produce social media content, primarily via TikTok and Instagram. Their content is a blend of hard-hitting activism and humor that is both educational and hilarious.

Despite the funny tone Hart takes in many of their posts, having a public platform has not been easy. Hart is candid about their mental health deteriorating publicly due to factors that you can read more about on their personal website. Hart now uses their platform to draw attention to the issues that they’re passionate about while making viewers laugh along the way. Recently, they've been very active in positing about the protests in Iran that were sparked by the death of Mahsa Amini. In a news cycle that moves at lighting speed, Hart is keeping the protests in Iran, as well as other important feminist and humanitarian issues, at the forefront of their followers' timelines.

You'd be hard-pressed to scroll through any of Zoe Roe's social media pages without cracking a smile. She is the queen of self-love and her content is full of personal mantras and words of encouragement meant to make her followers feel like the bad bitches they are. Roe is best known for her openness about her sexuality, down-to-earth energy, and signature high kicks. Being an infectiously positive person doesn't mean she shies away from sharing the less-polished parts of her life. Her Instagram stories often feature her very honest answers to questions from followers, addressing things that range from eating disorders, to being confused about your own sexuality, to being body-positive despite high cultural expectations of how bodies should look. Roe has a way of making all 8.5 million of her TikTok followers feel like her bestie, and curates a safe space on her pages for people to be and love themselves. You can find her on Instagram and TikTok.