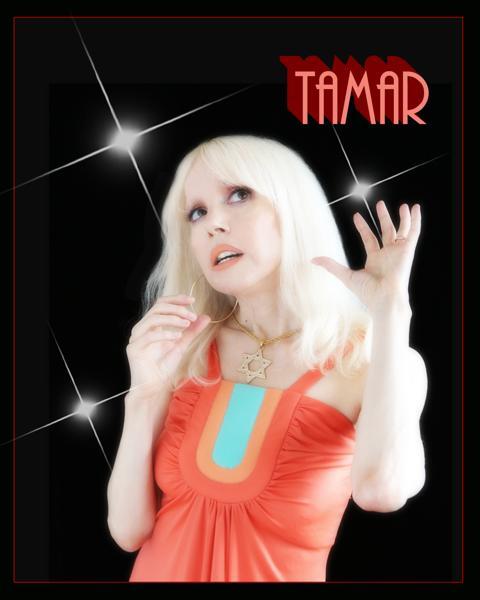 If you’re in the New York City area this October strap on your mask and make your way to the very cool downtown, cabaret venue Pangea. Actor, singer, and performance art provocature, or as she prefers, provocatuese, Tammy Faye Starlite has a new show that she will perform every Thursday of the month.

Yesterday, Today and,TAMAR, features Ms. Starlite as TAMAR the fictitious Israeli born singer, actress and chanteuse. Known as the “Belle of EL AL”, TAMAR is the winner of two Giorgio awards for Best Spoken Word Disco Performance By A Non-Belarusian Female Solo. You’ve also seen her many television appearances on such programmes such as Chi Sono, Musikpop, Dig a Dang & The Merv Griffin Show, not to mention her various speaking roles in Golan-Globus productions such as THE FIG BUSH.

If you’ve been lucky enough to have experienced Tammy’s previous work such as her tributes to two of the grand dames of Rock ’N Roll, Cabaret Marianne (Marianne Faithull) and Nico Underground (Nico), then you won’t want to miss this latest project from such a talented tour-de-force like Ms. Starlite.

Yesterday, Today and,TAMAR is the conception of Ms. Starlite and was written with Rachel Lichtman who directs. Pangea is located at Second Avenue at East 12th Street, New York, NY. in the East Village. Tickets are $25 in advance and $30 at the door and are available now https://www.showtix4u.com/event-details/55943