Happier Than Ever: Billie Eilish Dissects Her New Life As A Superstar 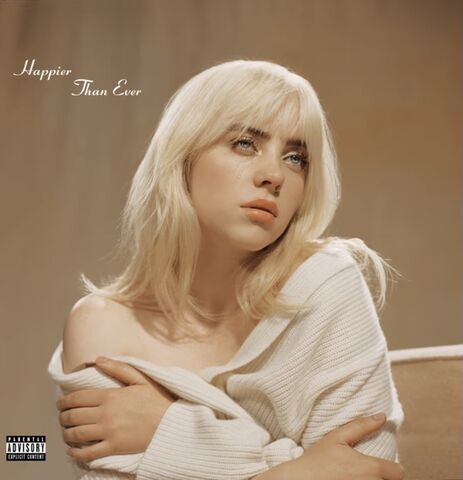 At only 17, Billie Eilish became the unofficial spokesperson for Gen Z.  Teenagers fell in love with her debut album, When We All Fall Asleep, Where Do We Go? for the unfiltered rawness with which she describes the spectrum of growing pains: from unrequited love to depression. On the surface of her new record Happier Than Ever, Eilish has shed her trademark angst; trading in the dark hair, demonic grin and asylum aesthetic of the first album cover for a platinum blond, old Hollywood, angelic vibe. But listening to the album it soon becomes clear; Eilish’s look might have changed, but her words still drip with sarcasm.

The album embodies her mixed emotions about being the most famous teenager in the world. As with most female pop stars, Eilish was briefly untouchable: all praise and focus directed towards her trailblazing sound. Inevitably though, people took out their digital magnifying glasses to see if her strong personality would burn under the opinions and beauty standards that accompany such a meteoric rise.  If When We All Fall Asleep...captured Eilish’s inner demons, Happier Than Ever is a reaction, and rebellion against these new external predators.

The sound of the new album is not as cohesive as the first, but it’s the unpredictability of each song, and the contradictory emotions of the album as a whole,  that captures such an honest picture of how disorienting young stardom is. Her perspective is no longer complete doom and gloom, and she slides between genre and tempo to show how her life is at times exciting, at others sinister.

There are moments of pure victory. With ‘Lost Cause’, Eilish’s former heartbreak crystallises casually into self-assurance, as she smashes the rose-tinted glasses she had for a lacklustre boyfriend in a sleepy voice: “I used to think you were shy, but maybe you just had nothing on your mind...” Likewise in ‘Oxytocin,’ her breathy whispers over a menacing, techno pulse recall the vibe of her last album, but this time she channels it all into an urgent sexual fantasy. The playful ‘Billie Bossa Nova’ sees Eilish sing seductively to a lover over a Latin guitar, and she seems to be seducing herself at the same time through the thought of eloping temporarily from the spotlight: ‘Nobody saw me in the lobby/nobody saw me in your arms...’  Eilish’s pessimism creeps in through the mirror image of this track, ‘NDA’, which matter of factly counts the insane ways fame compromises her love life and freedom (stalkers, potential scandals). Over an unsettling, pulsating beat, Eilish’s voice gets more distorted the more she describes feeling out of control; ‘you couldn’t save me but you can’t let me go.’

Elsewhere, the theme of sexuality swerves into even darker places, but, surprisingly, over some of her sweetest sounding melodies. “Your Power” reflects quietly on her delayed realisation that her naivety was abused in a relationship with an older man. Stripped back to just an acoustic guitar, Eilish’s ethereal voice effectively puts the chilling connotations of lyrics like ‘ she was sleeping in your clothes/ but now she’s gotta get to class’ centre stage.

Where Happier Than Ever  finds is most successful, is in its portrayal of the many dimensions of Eilish’s relationship with her body. During the pandemic last year, a paparazzi photo of Eilish in a tank top became a source of widespread ridicule. The music video for ‘Lost Cause’, seems to put an indifferent middle finger up to these body-shamers, as Eilish dances confidently in underwear with female friends. Yet, in a recent interview with The Guardian, she was blunt about her negative view of her body, and she doesn’t shy away from this insecurity on the album either.

‘Male Fantasy’, feels like the sister song to ‘Your Power’; over a gentle acoustic guitar Eilish shows honestly how circumstances, like a break up, can cause body confidence to crumble far quicker than it is acquired.  And yet, though Eilish never denies the reality of her self-image, in other songs she takes back control by shifting the focus away from her body, and onto the creepiness of those who spend their time dissecting it. In ‘Therefore I Am’ and ‘Overheated’ she is playfully scathing; ‘is it news? News to who?/that i really looked like the rest of you.’

Tags: Billie Eilish , body-image , break-up , fame , album , happier than ever , teen stardom. , body positivity
Support Feminist Media!
During these troubling political times, independent feminist media is more vital than ever. If our bold, uncensored reporting on women’s issues is important to you, please consider making a donation of $5, $25, $50, or whatever you can afford, to protect and sustain BUST.com.
Thanks so much—we can’t spell BUST without U.