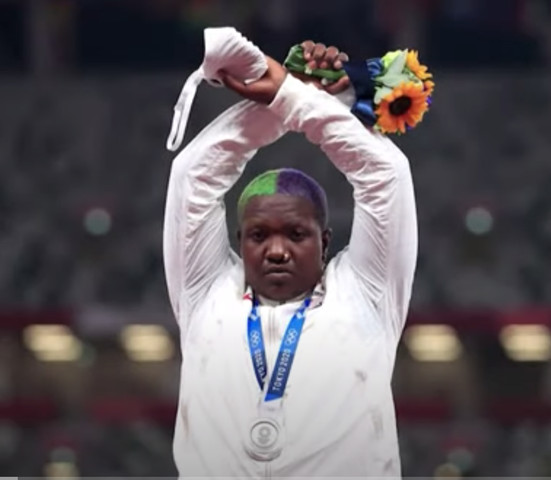 On Saturday, American shot-putter Raven Saunders stepped up to the Olympic podium in Tokyo to receive her silver medal and rose her arms in an X above her green and purple-dyed hair.

In an interview with NBC, the Olympian explained her gesture as representative of “the intersection of where all people who are oppressed meet.”

The 25-year-old has spoken out about her identities as a Black queer woman who has struggled with issues of mental health and views herself as at that intersection personally. “I decided to use my platform to really speak up for all of those people, anyone that represents any part or anyone one of those groups; I’d like to say this medal is for you guys.”

Saunders has become known in the games for donning Hulk face masks during competition. Saunders has said she uses it as a way to compartmentalize her performance as an athlete having previously discussed the tolls that her athletic life has taken on her mental health, particularly after her Olympic debut in 2016’s Rio games. Describing the intense depression and suicidal thoughts she experienced post-games to CNN Sports in preparation for this year’s games, Saunders said, “I got to a place where, coming back from the Olympics, I was questioning who I was. I was down because it’s like I’m being put back into this place that I don’t necessarily want to be in.”

Mental health has become a popular topic in the media during this year’s Tokyo games after gymnastics icon Simone Biles withdrew from individual and team competitions last week to focus on her mental and emotional health. Even outside this year’s Olympics, mental health among athletes has been a growing topic of conversation amongst media coverage of the world’s elite athletes. In May of this year, tennis star Naomi Osaka announced she was withdrawing from the French Open over mental health concerns related to post-game press conferences, citing struggles with anxiety and depression.

Saunders announced Tuesday on Twitter that her mother had recently passed away and said she would be taking time off social media to focus on her family and her mental health.

Although recent policy changes from the International Olympic Committee (IOC) have been designed to allow athletes to freely express themselves in other spaces (previous rules have banned any kind of protest or demonstration in any Olympic space or venue), they have held back from allowing athletes to protest in “the field of play”, according to statements made by the committee. The IOC said they would be investigating whether Saunders’ gesture on the podium constituted a rule breach before announcing that it would be suspending any actions related to Saunder’s podium protest in light of her mother’s recent death.