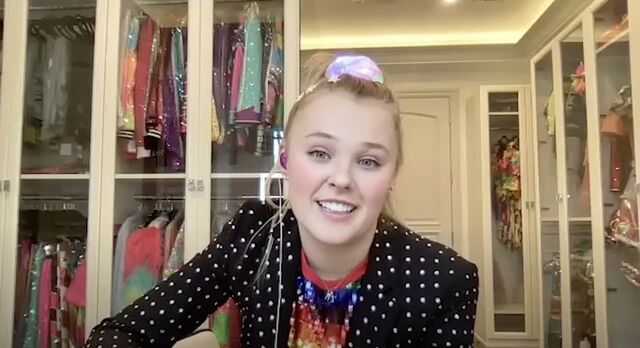 Reflecting on a Lovato concert she went to several years back, 18-year-old Siwa described “being a little too interested” in the way Demi danced with one of their backup dancers, Jojo Gomez, during a performance of “Cool for the Summer.”

Lovato was clearly thrilled by this information, particularly when Siwa explained that her girlfriend Kylie Prew’s own gay awakening was prompted by the very same performance. Laughing, Lovato responded “Wow, I’m so happy I could play a role.”

Lovato described the performance of the 2015 hit as “my way of sharing with the world, without confirming, that I was bisexual,” explaining that they weren’t quite ready to do it officially at the time. They told Siwa they were “so happy that you could see a little glimpse of that pride through that performance.”

Siwa came out as part of the LGBTQ+ community in January 2020, while Lovato came out as bisexual in 2017 and as nonbinary just this past May.

Siwa discussed her own coming out, telling Lovato, “Everything about it was just so natural, like it was just meant to be.”

Lovato praised Siwa, telling her, “you chose authenticity and I think that is so brave. It’s also just so admirable for someone in your position to choose that.”

Tags: Demi Lovato , Jojo Siwa , 4D with Demi Lovato , nonbinary , LGBTQ+ , Cool for the Summer , gay awakening , jojo siwa and demi lovato.
Support Feminist Media!
During these troubling political times, independent feminist media is more vital than ever. If our bold, uncensored reporting on women’s issues is important to you, please consider making a donation of $5, $25, $50, or whatever you can afford, to protect and sustain BUST.com.
Thanks so much—we can’t spell BUST without U.