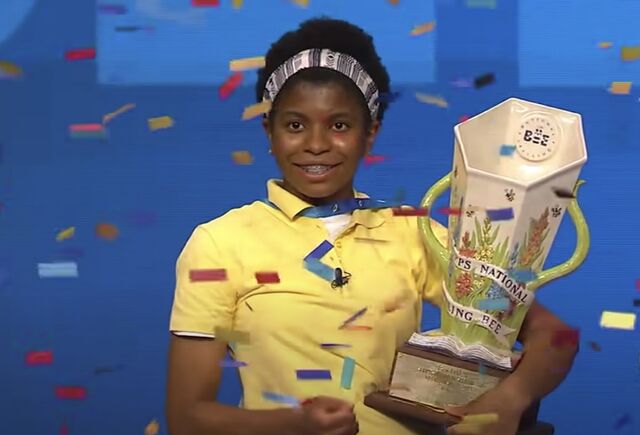 Zaila Avant-garde became the first African American winner of the Scripp’s National Spelling Bee on Thursday, and is quickly becoming America’s favorite (and most interesting) 14-year-old.

After unsuccessfully competing in 2019, Avant-garde won this year’s bee after correctly spelling the word “murraya,” a genus of tropical Asiatic and Australian trees.

According to ESPN, Zaila first started competing in spelling competitions only a few years ago, after her father saw the spelling bee on TV and realized that his daughter’s gift for doing difficult math equations in her head could transfer into spelling as well.

In addition to being an excellent speller and math wiz, the eighth-grader is also a gifted basketball player, holding three Guinness world records for dribbling the most basketballs simultaneously. She hopes to one day play for the WNBA.

Zaila holds three basketball dribbling records and is looking to set more - she also features in the upcoming #GWR2022! pic.twitter.com/3peSggJ6T9

While last year’s spelling bee was cancelled due to the pandemic, this year’s bee was significantly different from previous years. The 209 contestants competed virtually for the first rounds of the competition, with the remaining 11 competing in the final round in person at the ESPN Wide World of Sports complex in Orlando. Contestants—many of whom are still too young to receive the coronavirus vaccine—were socially distanced and wore masks. The only attendees were staff, media, and family members of the spellers.

One of America’s most well-known educators, First Lady Dr. Jill Biden, was also in attendance, cheering the competitors on.

Congratulations again to Zaila and all the Spellers! What a night! pic.twitter.com/W1EOhxR4Gt

Zaila has been celebrated by everyone from Michelle Obama to Anthony Mackie, a fellow Louisianan, who gave her a shout out as he hosted the ESPYs over the weekend.

In addition to a very cool, recently re-designed Scripps cup trophy, Zaila will get a $50,000 cash prize from Scripps, a $2,500 cash prize from Merriam-Webster, and from Encyclopedia Britannica, $400 worth of reference works and a three year subscription.

On her victory, Zaila told NPR, “I’m really proud. I’m hoping lots of little Brown girls all over the world and stuff are really motivated to try out spelling and stuff because it’s a really fun thing to do and it’s a great way to kind of connect yourself with education, which is super important.”

"I am Greta": A Look Inside The Life Of A 17-Year-Old Climate Activist - BUST Movie Review

Tags: Zaila Avant-garde , Scripps National Spelling Bee , Basketball , murraya , Dr. Jill Biden , Anthony Mackie , Michelle Obama , ESPN
Support Feminist Media!
During these troubling political times, independent feminist media is more vital than ever. If our bold, uncensored reporting on women’s issues is important to you, please consider making a donation of $5, $25, $50, or whatever you can afford, to protect and sustain BUST.com.
Thanks so much—we can’t spell BUST without U.