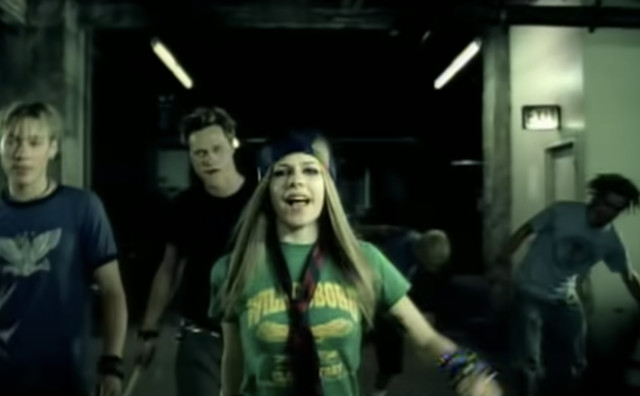 Break out your heavy black eyeliner and plastic bracelets. “Sk8r Boi,” the 2002 pop-punk anthem, is once again making a splash—this time, on TikTok.

On June 21st, Avril Lavigne made her iconic TikTok debut, posting a 30-second video of herself on the top of a halfpipe, lip syncing to her hit “Sk8r Boi,” while wearing her iconic black tank and cargo shorts, complete with a loose striped tie.

The video takes a twist, however, when the camera zooms in on Lavigne, then zooms out to show none other than former sk8r boi, current sk8r man, Tony Hawk. The video ends with Hawk doing tricks on the halfpipe while “Sk8r Boi” continues to play.

At the moment, the video has 20 million views, and has surely sent many millennials into a fever dream of early 2000s nostalgia.

June 21st was Go Skateboarding Day, an annual event meant to encourage involvement and promote accessibility of the sport around the world (this year, coming about a month before skateboarding makes its own debut at the Olympics). Lavigne’s “GoSkateboarding” hashtag appears to shed some light onto the inspiration for the video.

Lavigne is also set to release a new album later this summer, which will reportedly be a return to her pop-punk roots. While she is clearly taking advantage of the resurgence in early 2000s aesthetics, one can only hope it ends before we cycle back to low-rise jeans and plucking our eyebrows to within an inch of their lives.

Five 2000s Trends That Must Die

What The Tweens Were Into: 2000s Edition

Tags: Avril Lavigne , Sk8r Boi , Let Go , Tony Hawk , TikTok , Go Skateboarding Day , skateboarding , pop punk , 2000s trends , 2000s nostalgia
Support Feminist Media!
During these troubling political times, independent feminist media is more vital than ever. If our bold, uncensored reporting on women’s issues is important to you, please consider making a donation of $5, $25, $50, or whatever you can afford, to protect and sustain BUST.com.
Thanks so much—we can’t spell BUST without U.