Comedian Grace Kuhlenschmidt is Here, She's Queer, and Her Social Media Fans are Into It 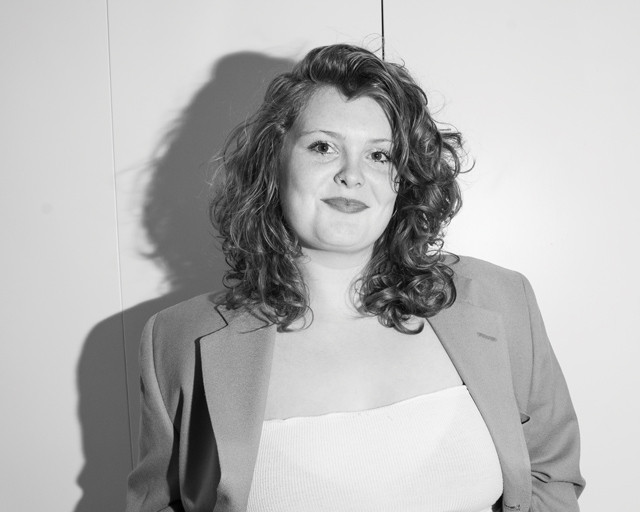 Pop quiz: What rom-com would Grace Kuhlenschmidt remake with a gay twist? “That’s a tough one,” she says after a beat. “Romantic comedies are my favorite genre and they’re all straight. But I think Meet the Fockers could be fun if it was about lesbian moms dealing with their daughter bringing home a boyfriend.”

The choice provides a window into the up-and-coming comedian’s taste—one seasoned with pinches of surprise and satire. Most important, her style is hilariously, unabashedly, almost boastfully queer. Kuhlenschmidt, 26, doesn’t explicitly endeavor to make her videos on Instagram (for her 54k followers) and TikTok (for her audience of 267k) about being a lesbian, about pop culture, or about anything, really. Rather, her vignettes bob and weave around anticipated punchlines, shifting direction in sublimely weird ways you’ll never see coming. Her off-kilter monologues skewer everything from LGBTQ stereotypes (pining after a roommate who’ll never love you back) to performative allyship (a “woke” bully plans to beat up a classmate before finding out they’re gay) to a delirious poke at Happiest Season that casts Santa as the ex from home...who’s actually hooking up with Olympic diver Tom Daley. “There’s no way I’m making something that doesn’t have a touch of queerness,” Kuhlenschmidt admits.

Like other comics’ origin stories, Kuhlenschmidt’s sensibility was forged in the crucible of tween angst. The L.A. native didn’t have a knack for sports or studies, but she was funny. “I was always chubbier, more masculine, and had shorter hair than other girls,” says Kuhlenschmidt. “In middle school, I started going to a private school where I had to wear a skirt every day. The situation was, ‘Be feminine or bust,’ and I never fit the mold.”

Performing improv and sketch comedy in college helped Kuhlenschmidt cement her ambitions. “Also, my grades were so low,” she says, “I had to do the thing I was good at.” Then she realized was gay. “In hindsight, it’s obvious,” she says. “All I needed to come out was positive reinforcement—someone to teach me that being queer is cool. Because when I was younger, I thought being a lesbian meant being like my theology teacher who always sweat profusely.”

Today, Kuhlenschmidt is part of a wave of comics queering the traditionally hetero male scene. Mainstream institutions—think Saturday Night Live and zillions of stand-up specials—still roll out the red carpet for mediocre men, but Kuhlenschmidt has found thousands of fervent fans on the Internet who validate her voice and POV. This community is another reason for her to keep cracking wise about Blue Is the Warmest Color and Pete Buttigieg—not only because it’s an act of radical reclamation, but also because her platform might be the only place an isolated gay kid can call home. “Your community might not be your friends or your family,” says Kuhlenschmidt. “You might find it on one of my pages—and that’s cool. So, let’s do this! Let’s be best friends.” –Zoe Donaldson

You Didn't See SNL's Best Dan Levy Sketch, Lampooning Toxic Masculinity, Because It Was Cut for Time. So Watch It Now!

Tags: Grace Kuhlenschmidt , comedian , queer , Meet the Fockers , Instagram , TikTok , Happiest Season , Blue is the Warmest Color , Pete Buttigieg , Saturday Night Live , Tom Daley , LGBTQ , woke
Support Feminist Media!
During these troubling political times, independent feminist media is more vital than ever. If our bold, uncensored reporting on women’s issues is important to you, please consider making a donation of $5, $25, $50, or whatever you can afford, to protect and sustain BUST.com.
Thanks so much—we can’t spell BUST without U.