Details
BY Sydney Jackson
IN Entertainment
Published: 19 May 2021 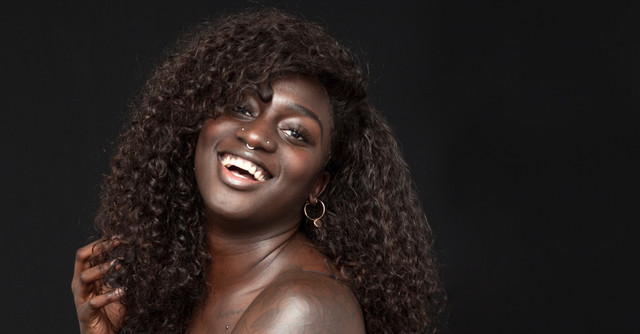 Khadija Mbowe is everyone's favorite Internet aunty, and for good reason. Known for her thorough and extensive analysis videos on YouTube, The Gambian-Canadian-American creator’s rise to online fame has impacted the social commentary community in a huge way by bringing forth conversations on race issues, pop culture, and more. Whether it’s her engaging editing style, her candidly clever jokes, or her deep social awareness, there is no doubt that Mbowe is here to stay for a long time. I had the pleasure to get to know Mbowe as we discussed her background in classical music, her growth as a creator, and the importance of knowing oneself.

Of all the videos that you have made so far, which one are you most proud of?

The one that comes to mind is the “Cuffing Season” video, and that’s probably the least viewed one that I have. I enjoyed making it because it was fun to talk about, and I'll probably re-release it later this year. I loved the media that I chose for it. It was the first time I was starting to experiment with my editing. The other one would be the “Video Vixen” one, [specifically] the first part of it, just because I had fun making it and felt as if I was doing a documentary in a way.

Regarding your series, "Into The Beret," what was your inspiration behind making those videos, and will there be more in the future?

I do want to make more. I just moved, so it’s a matter of getting to know people and seeing who would be interested in that. There was one that I filmed with my sister last year that I never released. When I initially thought of [the series], I thought it would be cool. I’m the kind of person at parties or any large group setting who has a bunch of questions in the notes app of my phone, and I’m like, “Hey, are you close to your parents?” or “hey, if you could live forever, at what age?” [Laughs]. I love asking people stuff like that; I hate small talk. So, I thought it would be cool if I got to do that and interview people.

My sister sent me Damon Dominique’s videos, and I was like, “This is exactly what I want to do." I know people are going to think that I stole it from him, but then I was like, “it doesn’t matter." I just had friends that were willing to sit in a park and they know how I am. So, that’s how it all came together.

I know you have previously discussed your experiences with school and studying classical music and opera. What are the biggest lessons that you took away from those moments in your life?

I think it taught me a lot about hard work and discipline. It’s something that takes a lot of time, energy, dedication, and focus. I’m appreciative [for that reason], because I’m not singing these days and not caring too much about being a singer or anything like that. For me, I learned a lot about the discipline required to pursue any sort of career endeavor. And also, you get rejected from anything, so it gives you a tough skin as well.

Do you feel that your background in music and learning about the discipline that goes into that field helped you with creating The Marigold Music Program and your other programs?

It sort of did, but I think it mostly taught me what I didn’t want to do. Classical music is very traditional and elitist, and from the onset [we] did not want that to be our mandate. Everything that we do, we want it to be fully funded, because part of the problem is that all of these programs cost way too much money. It’s really hard in the nonprofit sector, unless you have donors, grants, etc. We’ve applied for grants, gotten some, and we’re lucky with that. It’s too easy to charge people money instead of doing the legwork of trying to find people that will help you pay for stuff so that you don’t have to charge people.

In my dream world, we get a bunch of donors to help us, so that they can take their money, and if they are not going to put it into programs and such on their own accord, we reach out to them and guilt them. Then, they’ll put their money into our program, and we can help make things free for everyone.

What advice would you give to someone who might also want to start their own program or non-profit organization?

Trust your instincts. Know that it is a lot of hard work, but also, you have just as much of a right to create something as the next person. I think sometimes, people need to be given permission. That’s how we started; I had these ideas and I looked at other programs and thought, “Other schools are doing this, why don’t we have something like this here?” It took a couple of mentors to say, “Why don’t you start your own program?” It crossed my mind, but I was too scared to say it out loud. Honestly, it’s a matter of giving yourself the permission to do what you want. So many of us don’t realize how impactful we can be in other people’s lives; that we all as human beings on an individual level feel so much more insignificant than we actually are. To me, I believe that anything you do, big or small, can impact other people and you have no idea what could happen if you say out loud to yourself that you want to do something and give yourself the chance to do it.

I noticed in the description of your videos that you have the term “Land Acknowledgement” in all of them. What’s the context behind that?

It’s funny, land acknowledgments are popular in Canada. You can’t go to a function, performance, website, webinar, seminar, or anything worth its salt and not hear the land acknowledgment. There’s a large Indigenous community in Canada and America as well, and Canada is trying to be better about stuff like that. I have mixed emotions about land acknowledgments, only because it’s the least we can do. At the same time, what is acknowledging the land, if you are not going to help people get it back?

I do like them because so much of my audience is American, and it encourages them to look into the history [of their own land]. I know other Canadian creatives don’t put it in their YouTube bios, but for me, if no one has ever seen it before, and I can let them be a little more curious and seek out other information, then I feel I have done a decent job.

Is there anything that you would want your viewers to know or understand about you?

So many things. What I want them to realize is that I am a person and I have another life outside of the internet. I have a history and past that they don’t know anything about, because they are just now meeting me. I also want people to remember that I am not some unproblematic deity. I’m a person who says and does things, makes mistakes, and has a Scorpio moon, so I can be petty; I’m just a regular person. I enjoy making [content] and I love the people watching it and engaging with it. I am but one person, and I am managing and juggling so many things in my life.

I want people to give me grace and have patience, so if I don't talk about an issue that they want me to discuss, it doesn’t mean that I will never talk about it; it’s just I can only tell one thing at a time. I try to avoid being reactionary about things, since it’s easy to do that these days. I think we can all tell so many people are looking to the early 2000s and being like, “Wow, we treated women terribly. We did this terribly." And if we had a bit more patience and stillness, we wouldn’t have to be looking back at ourselves. I just want to encourage everyone to remember that just because they see something, doesn’t mean they are getting the full story.

We’re all emotional beings and it’s why I am so adamant about people getting to know themselves and their emotional language. If you don’t, you react and do things and don’t know where it comes from. Emotions are our information, so that’s why I am sensitive about these things. People will throw their expectations, questions, wants and desires onto me, and I’m not even famous. I think people have this high expectation that I may have set based on the way that I do things, but I don’t like the idea of putting people on a pedestal. People are not infallible, and any one of us is capable of messing up and being wrong.

This is one of my favorite quotes ever: “Dreaming is a form of planning” [by Gloria Steinem]. Another is: “Knowing is only rumor until it lives in the muscle” [by the Asaro tribe of Indonesia and Papa New Guinea]. It’s my favorite because it’s so true. You can say you know things, but until you have lived with it—not just experienced, but actually lived with it—do you really know where you are or are just implying?