Details
BY Sydney Jackson
IN Entertainment
Published: 12 May 2021 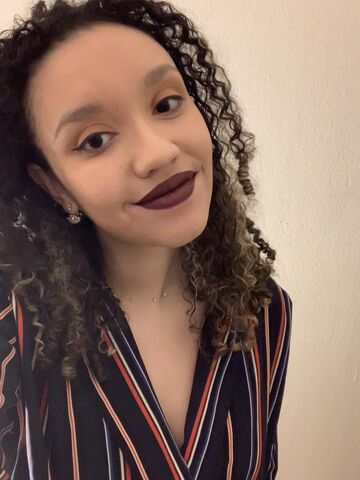 Known on Twitch as latinKatt, Katt is a streamer, content creator, and doctor. Mainly streaming the popular Twitch-favorite game Apex Legends, Katt also hosts her own podcast called Coffee Talk, in which she brings together small and large streamers to discuss various topics within the streaming and creator community, such as mental health, failure, relationships, and even diversity. I had the pleasure of getting to know Katt and learning about her journey thus far.

I wanted to congratulate you on finishing school and becoming a doctor. How does it feel to say that you are the first doctor in your family?

It feels good. It’s a family dream to be a doctor because both sides of my family are from Colombia and Jamaica, so they come from being very poor. They moved to the States in order to give their kids and grandchildren an opportunity for success. It was scary to go through this because it was like no one really knows what I am doing, and I am just kind of figuring it out as is. Not only did I accomplish my goal of becoming a physician and proving to myself that I can do it and that I am smart and determined enough, but also, it feels good to be able to accomplish that for the family as well.

When did you start making content/streaming and how do you feel you have evolved the most since starting?

I picked up streaming as a hobby [while I was] in med school, especially when COVID hit, it was kind of like, “Well, I’m indoors and I need something to do." My fiance helped me build my setup and we started gaming long distance because our relationship was long distance. Eventually, I saw that he was streaming and then I was thinking that maybe I should stream, and he encouraged me to start.

I think it’s made me more confident in myself because even though I am chugging along, I’m trying to become a doctor, and growing in that aspect. Personally, I always dealt with self-esteem issues, depression, and people think that I’m always outspoken, but I am not. [Streaming] made me more confident and with Twitch, a lot of it is, “What’s your brand? What are you trying to showcase out there to make people come back and stay or whatnot?”

It’s also helped solidify what I want to do in the future. It’s always been “go to medical school, become a doctor,” but after that, it’s a question mark, since [that’s] all I’ve been going towards, and I already did that. Streaming has [helped me realize] that I want to do other things, and that’s okay.

Definitely. It was not something that I thought, “I’m going to give up medicine to pursue content creation," but it made me realize that I never knew I had this passion until I did it and saw my community grow. Since then, I don’t want to stop streaming. I know there’s going to be times when I’m in residency and I am not going to have time, and that’s fine. That’s something that I will have to accept, and something that I have been battling with. Towards the last few years of medical school, streaming has uplifted me because it gets really tough and depressing. [Also with] not knowing what the future is and where I am going, streaming has brought me back to that center point; it’s been a positive impact on my journey, for sure.

I wanted to touch on your podcast Coffee Talk. The obvious question would be what was the reasoning behind creating this show on your channel?

It was an idea that I randomly had. I’m a person that likes to talk a lot and streaming has made me be that person. My community had always [asked] “why don't you talk more about yourself or with other people?” This happened a few weeks after I had gotten Twitch partnered, and I had thought that it would be cool for small streamers to get more exposure, since it’s hard for them based on how the algorithm works, and for them to have a platform to talk on those issues. Also, bringing in larger streamers to discuss those same things and to help minimize that [hierarchy] between the two.

I wanted that to happen because it’s cool to be able to say, “Oh, I’m in a podcast with someone that I watch a lot, and to talk about real-life issues with them." I wanted to show my community that, yes, we game and stuff like that, but we are people and we have things that we battle with. It would be a great idea to talk about those things like mental health, relationships, how to grow your stream, etc. I think it’s important, and this goes for anything in life, to be able to share your knowledge with other people who are trying to start that journey. We learn things along the way, and I feel as POCs, it’s important to create this pipeline that networks with each other because we are trying to uplift and support one another. Plus, the reason I called it Coffee Talk is because I like to drink coffee, and I like talking.

Is there a favorite topic that you have discussed?

I think my favorite would have to be the mental health one. A lot of streamers talk about mental health, but I think it got really personal in that conversation. Everyone was sharing their own personal stories, such as the things they have to go through, especially with COVID. Mental health is [such an important topic] to be discussed, especially with people who have a larger platform.

Also, [one of my other favorite topics is] the larger partner talk, as people really got to know each other better, and it got emotional as well. We developed a newfound respect for each other and got to know them not just as another streamer, but as a person.

Is there anything that you would want your viewers to know or understand about you?

I’m kind of an open book when it comes to different things. People always ask questions about what I think about this or that, or how I am doing. I guess the thing that I want anyone to know about me is that, even though I am doing a lot of things like school, training, seeing family, and such, it takes a toll. Especially on my mental, physical, and emotional health, to the point that when I would stream these long hours and also be studying, my physical health was going down and my mental health was bad. It’s something that I am still struggling to balance.

Some days, I just don’t feel like doing anything, and that’s okay. I’m not perfect, and a lot of people think that about me, like “you’re this confident person, you’re perfect, you’re doing a lot of great things, etc.” But I have my moments. Even though I have a lot of success that’s happened so far this year, it took a lot to get there. It was a lot of sacrifices, mental downfalls that I had to go through; I was diagnosed with depression back in November and having to go through therapy and stuff like that in order to do the things that I had to do.

I think it’s important that people with a larger platform talk about this stuff to show that it’s more abnormal for people to be perfectly okay compared to people having problems in between. I’m working on myself and working as my own person... and that’s just part of the journey of growing my platform.

Are there any last words that you want to put out there? Anything you want to share with the world?

If you have been thinking of doing something, but you’re like, “I don’t know how, I’m not confident, I don’t have the right thing," just do it. You never know what can happen and at the end of the day, you are the only person stopping yourself. In order to have peaks, there will be valleys, no matter what you are doing. If you feel as if things are going up, eventually, they will go down, but that’s normal. That’s part of the process, unfortunately, but we do have those lows. If you need help, go see a professional and that’s okay. I have to do it for myself as a future physician. You’re worth it.

You can watch all of Katt's Coffee Talk episodes here. You can catch up with her streams here.

Tags: latinKatt , Coffee Talk podcast , Twitch , live streaming , content creator , More Than A Screen Name
Support Feminist Media!
During these troubling political times, independent feminist media is more vital than ever. If our bold, uncensored reporting on women’s issues is important to you, please consider making a donation of $5, $25, $50, or whatever you can afford, to protect and sustain BUST.com.
Thanks so much—we can’t spell BUST without U.