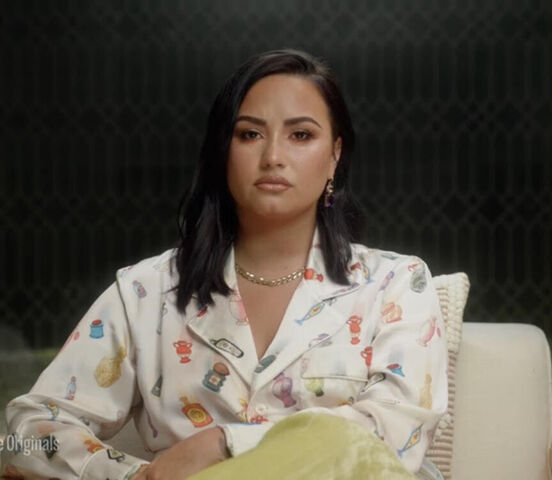 Demi Lovato says she doesn’t want to talk about her recovery after facing backlash about being “California Sober.” "The Anyone" singer, 28, plans to keep her recovery a secret, claiming that her sobriety is between “her and her treatment team,” Buzzfeed reported.

Lovato bore her soul in her YouTube docuseries, Dancing with the Devil about her struggles with addiction and eating disorders. Her prominent overdose was in July of 2018, when she took opioids laced with fentanyl. Since then, she’s tried to get her life back on track and decide what’s best for her.

After revealing that she’s not completely sober in her documentary, a wave of criticism struck Lovato. She claims she enjoys smoking weed and alcohol in moderation. Even her circle of friends disagree with her semi-sobriety. People reported:

"Moderation doesn't work. Sorry. If you drink you're going to drink more. If you take a pill, you're going to take another one," Elton John says in the episode. "You either do it or you don't."

"Demi knows the whole moderation thing isn't something I totally agree with," her manager Scooter Braun says."What I've learned with the whole addiction thing is if I push her to do what I want, I push her away. I can't control her. What I can do is be a friend and hope that she's right."

Despite condemnations, Lovato says she needs to do what’s best for her which is enjoying what doesn’t kill her. Total sobriety is “setting herself up for failure,” which makes her want to do something even more. She views things in black and white, “the one size fits all” solution doesn’t work for her. She even admits what she’s doing isn’t for everyone, reported Buzzfeed.

“I also don’t want people to hear that and think that they can go out and try having a drink or smoking a joint, you know?” she said. “Because it isn’t for everybody.”

Lovato’s drug abuse started when she was still working for Disney, Glamour wrote. She tried cocaine for the first time in 2009 at the age of 17. A year later it was revealed that the young actress suffered from addiction, eating disorders, and self-harm. Shortly, she was admitted into rehab where she would relapse multiple times before becoming sober in 2012. Almost a hair away from reaching six years of sobriety, she had the lethal overdose where she almost lost her life. From there, she battled to cut off deadly drugs, but continued to smoke weed and drink. Being “California Sober” is what works for her.

The singer plans to keep her recovery a secret, claiming that giving details “opens herself to more scrutiny," reported Buzzfeed. What works for one may not work for someone else. Lovato believes this is the best course of treatment for her and will do what works for her. Everyone has their own path they need to take. This is the last time she will discuss her sobriety. Her recovery is between her and her treatment team and no one else.

Tags: Demi Lovato , addiction , recovery , feminism , entertainment
Support Feminist Media!
During these troubling political times, independent feminist media is more vital than ever. If our bold, uncensored reporting on women’s issues is important to you, please consider making a donation of $5, $25, $50, or whatever you can afford, to protect and sustain BUST.com.
Thanks so much—we can’t spell BUST without U.