Get to Know Maddie Dragsbaek As She Discusses Making a Short Film, Learning How To Be Patient With Yourself, Finding Your Medium, And More: BUST Interview 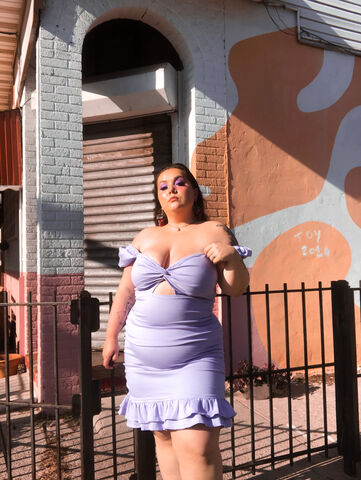 If nothing else is important for a young woman to learn, it’s that loving yourself should always be top priority. This is a message that anyone who views Maddie Dragsbaek’s content can attest to. Having the pleasure to get to know Maddie a little deeper, join me as I uncover the ins-and-outs of what makes this woman so special.

I got a chance to view your short film, Aphrodisia, and I really enjoyed it. What was your favorite part of making the film?

I think my favorite part of any video production process is always the editing. I am such an editor through and through. It’s funny, because I do love the process of filming and working with actors and also writing. But in a way, I also dread it because I am looking forward to editing so much that I just want [filming] to be out of the way. Editing was definitely the most rewarding and fun part of the whole process.

Did you always want to be a director and be in charge of the whole process?

I think it molded over time because the first thing I ever wanted to be in video was a YouTuber. Growing up on YouTube, I started making videos with my friends the same time that the platform came out. So I think that started out like, “Oh, I just want to be a YouTuber.” Then as I got older, I had to decide what to major in college; it became like, “Oh I want to major in film.” I love to be in the driver’s seat with creating content the same way I am with my own YouTube channel. And so direction naturally fell in my lap as being the route that I would take in college, and then I fell in love with short films, the same way that I did with creating Internet content.

Were there any parts of the film that were difficult to shoot or that you had to take out?

Nothing that I had to take out, but the nudity scenes were particularly interesting to shoot. That was my first big direction moment, because I had directed shorts in the past but never to that caliber. Like, we did fundraising for [Aphrodisia], I hired people to work on that film, and so dealing with the nudity was new for me as a director. To cast actors that I didn’t know beforehand through a really intimate scene, and I hired an intimacy coordinator to help with that scene, and to make sure that the actors felt safe and comfortable the entire time...just making sure that it went smoothly in the end. That was super interesting and something that I had never done before.

I’m sure you probably consider Aphrodisia your baby since you put so much time and energy into making it, but looking at your other films, what would you consider the one that you are most proud of?

Honestly, it’s tough because I made a short film about my younger brother’s transition and that’s something that is close to my heart, because it’s my family. In terms of the final product and the amount of time/energy/effort that I put into it, Aphrodisia was definitely my favorite. It’s always going to have a little piece of my heart and, like, I got a huge tattoo because of that film, so I’d better care about it a lot [Laughs]. It’s with me forever.

Outside of filmmaking, what is your overall creative process?

I’m very in tune with myself in a sense that I talk to myself a lot. I will try to break down everything that I’m feeling, and have conversations with myself on a regular basis because it makes me feel good and like, “Ok, it’s all sorted up here.” Whenever I feel something strongly and really passionately to the point where I find myself wanting to talk and rattle off speeches on my opinions on whatever I am passionate about, that’s how I know I need to make something to do with that topic.

Before I made Aphrodisia, I was always getting fired up about the conversation of body count. For whatever reason, it popped up several times and in some of my relationships around the time when I started writing it. So naturally, I wanted to write something about that, but I wanted to do it from the angle of something metaphorical. Something that makes the audience do the work of figuring out what it is that I am trying to say about the film.

I think even in general when making YouTube videos, it all just comes from a place of undeniable passion that I can’t shut up about and figuring out what the best medium is to let myself express those emotions and thoughts.

You do poetry as well, so do you think that is also another medium that allows you to express that passion?

Yeah, totally. Poetry was the first way that I ever started expressing more vulnerable emotions. It was how I started opening up about body image for the first time and my struggle with an eating disorder in the past; that was all through poetry. When I first started writing, it was in a journal and me submitting it to my English teacher. Getting to go through the process of being vulnerable and having it locked away in a journal that was just for me, helped me become more comfortable with vulnerability and becoming more creative with it. I used to sit there and go through dictionaries and RhymeZone trying to find new words that would match what I was thinking and feeling but make my writing sound more interesting.

The more I got interested in being vulnerable and the more fun it became, the more I was willing to expand to videos as well, because that was always the passion and hobby that I felt that I had the most talent for.

When it comes to body image/ body positivity/ body acceptance, they mean different things to different people. What do those terms mean to you?

It sort of depends on the exact wording because the body positivity movement is something that has roots within the fat acceptance movement. It is always going to be a movement whose aim is to fight against fatphobia and to help people in marginalized bodies feel more accepted and comfortable in themselves. Whether it’s plus-sized bodies, trans bodies, or disabled bodies, just wanting to help people who aren’t given body positivity in the media and in the world that we’re in. The whole point of the movement is all about dismantling fatphobia and making sure that the people impacted by those types of things are heard and are at the center.

What has been the biggest lesson you have learned throughout your self-love journey?

The biggest lesson is patience and how you treat yourself. You can consume a bunch of media from influencers and people who make body positive content online, but at the end of the day, it’s you that you're alone with. Once all the noise gets shut off, and you don’t have anyone else around to make you feel good, how can you make yourself feel good?

Also learning to be patient with myself and to accept the bad days and not beat myself up when I have one. That was important and cutting out negative self talk is the best thing that I ever did for myself. Learning how to stop that in its tracks so that it doesn’t spiral into something worse, has been the best thing for my self confidence.

Just because you have bad days doesn’t mean that you are a setback in your journey...I think there’s a lot of power in learning to look at bad days as being a part of the journey.

You’re a video editor by day and you are also obviously a YouTuber. When you are working as an editor professionally while also doing your own content, is it easy or difficult to be able to separate those two roles?

I mean, I haven’t burnt out yet. I spend all of my life editing and I think it works because I love it so much. At work, I work for a skincare company, so I am constantly editing content about beauty and skincare, and so it’s almost like a break from my typical content.

Since most of the stuff is emotionally charged and heavy and I am talking about a lot of personal things, it’s nice to just unplug for a second. I love that I can take a break from the super emotional stuff while still doing what I love.

I think sometimes I do find it difficult to turn off the side of my brain that is super comfortable being out there and making content that is a little vulgar, but for the most part, open. When you’re making content for a brand, you have to reel it back a bit. I have to remind myself, “Ok, this is not a Maddie video. This is a work video.”

Is there anything you would want your viewers to know/understand about you?

This feels like a hard question because I feel pretty understood online, which is so rare. I feel so much of my younger life, I felt really misunderstood. It’s weird because now in my life, I feel really understood by the people that are around me and the people that keep up with me. I think that it’s few and far between when I get a comment from someone or I see a DM and I’m like, “Woah. You totally misread me, you got it all wrong.” I feel understood, and it’s a great feeling.

Meet Korty Eo, One of the Coolest Women in Lagos: BUST Interview