Meet Korty Eo, One of the Coolest Women in Lagos: BUST Interview 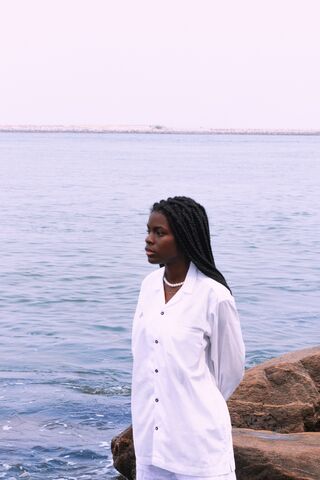 Eniola Korty, or as you may know her online as Korty Eo, leaves no room for error when it comes to creating. Based in Lagos, Nigeria, Korty has an impressive resume, as she credits being a graphic designer, model, artist, filmmaker, and now YouTuber. Her honest and frank storytelling, combined with her engaging and beautiful B-roll shots of her hometown, make for an engaging and captivating channel. I had the pleasure of getting to know Korty a little bit better via Zoom to understand just how dedicated she is to her craft.

Do you remember the first video that you ever made?

Ah, yeah. The first video that I made, people started to text me, “Oh, this is a nice video.” [The video] was one where I literally had my finger on my camera screen while I was in the car. So, everything was moving, but my finger stayed still, and people liked that. That was my first video that I put on Snapchat. But my first real video I made on Instagram, and that was back in December 2018. People really enjoyed that.

Looking back on the videos you have made so far, do you have one that you are the most proud of?

Honestly, I don’t know. Once I make a video, I don’t know how to go back and watch it. Now, I’m trying to go back and pay attention to it and look out for mistakes. But—it might be hard to believe—I don’t like a lot of my videos; they make me cringe. I read some comments and see what people like, but I feel that I am not close to where I would like [the videos] to be.

Speaking on your Flow with Korty series, you have interviewed a lot of different, creative people. Is there anything that you have learned from filming those videos?

Of course. Everyone that I have talked to, I have learned something from, no matter how different we may seem. For example, from the one I did with [Ashley Okoli], I learned that regardless of how different you may be, you have to be true to yourself. You need to be practical, you need to be smart.

From the [video that I did with] little kid [Rejoice], I learned that it is okay to be expressive. I try my best to find a balance between “this person is not perfect and everything they say is not right, so just know what works for you and take that.” I try not to edit [the entire interview] or take out something that they said that was wrong, but let people see that instead. That’s the biggest thing I have learned—that I can learn something from anyone no matter how small it may seem.

Do you have a favorite moment/episode from Flow with Korty?

I think my favorite would have to be with Rejoice. I’m trying to film with more children. I might actually do that this week. I really enjoyed her, and it was amusing. Not to talk down on my country, but Nigerian children are very sheltered, and because of that, they live in fear and can’t express themselves—even if you are thinking a lot of brilliant stuff. I had that problem growing up. I was too shy. But [Rejoice] was so expressive. You could tell that her parents allowed her to do a lot, and make a lot of mistakes.

Obviously the pandemic has affected a lot of us. How has it affected you personally? Has it made it easier or harder to create?

I think when the pandemic first started, it was really difficult. But again, humans know how to adapt to things, so it was hard and I was stuck. I couldn’t move around, I was in my house. I was scared to be honest, because I couldn’t think. It was just terrible for my work.

In fact, I think at that point, I was drinking a lot just to distract myself. There was a time when the lockdown was East in Nigeria, so during that period, I was able to go out for a bit of time. All I needed was to be outside for a short period because I would be out for, like, a day, and then come back, and I was able to start my work properly. It just gave me a lot of time to think about a lot of things.

You showcase a lot of Nigerian artists/creatives. What is the message that you want to get across with your viewers? Is there anything that you would want people to know or understand about Nigeria?

My goal is just to get people to see that there is a bit of you in everybody, so don’t judge people. In Nigeria, there is so much going on, and for people to pull through and find something that makes them happy and keeps them going is commendable. I really want to try and portray that as much as I can. If I was in the UK, the narrative would be different, but this is my reality, so this is what I am trying to show.

Is there anything that you would want people to know or understand about you?

When it comes to vulnerability and putting myself out there, that’s easy for me. I like to talk, but my work process is very difficult. There’s just so much that goes into it, and when you start something that you are passionate about, the pace is easy and everything else is easy, too. You feel as if you have found the next best thing in your life. But over time, it starts to feel like work. Finding that balance between not making it feel like work, but also putting in an enough amount of effort to where it is professional and comes off as effortless—that’s the biggest thing.

People think that it is so easy for me to do this, but it’s not because I put in so much work. Plus, even though I am trying to build a team, it is still me doing all of this work. Another thing is that I don’t know myself yet, so I can’t really say “this is where I am going." I don’t know that much. That’s why I like being around myself, and I am still just trying to find myself. People should not expect too much or put too much pressure on me.

To wrap up, is there anything that you want to put out into the world or any last words that you would want to share?

You can find Korty on all of her socials @korty_eo.

Harriyanna Hook Talks Acting, Creating Her Own Web-Series, And Staying True To Herself: BUST Interview