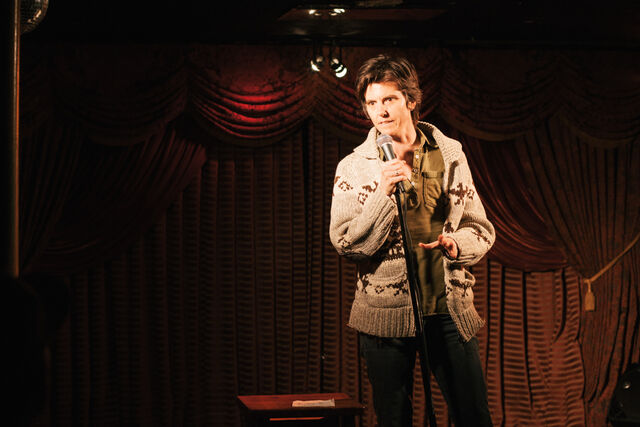 A former therapist of mine said she used to work as a switchboard operator. Only once, she admitted, did she ever eavesdrop on someone’s conversation: when Lionel Richie was on the line. Technically, I wasn’t eavesdropping on Tig Notaro and Sarah Paulson when I listened to the latest episode of Notaro’s “Don’t Ask Tig” podcast, but thanks to their explosive comic chemistry, it almost felt like I was.

The podcast is a new twist on advice columns, where listeners write in with (mostly) serious questions. Notaro—the host, if you haven’t guessed yet—repeats in each episode that she is not qualified to give advice, but she and a guest wind up giving it anyway. Paulson was able to relate.

A few video clips of Notaro with Paulson are available on Instagram, as the podcast was recorded while the two talked over Zoom. Early on, Notaro asked Paulson if she’d ever consider doing comedic roles:

TN: Would you really be open to doing comedy? …You’re one of the funniest people I know. You’re so funny, you get it and you don’t miss a beat…
SP: No one asks me to do it. No one. I think I just have one of those erroneous beliefs that I can’t do it…
TN: You could do it. I’m desperate to do it. I’m desperate to be in it with you, let’s be honest.

As the millennials say, this exchange gave me all the feels because it set up the rest of the show so perfectly. They were about to do the comedy together.

Notaro and Paulson have a clear intimacy, friendship, and camaraderie that shone throughout the episode. Take, for instance, Notaro wearing a jacket that Paulson once mocked. “I wore this jacket for you today, and you know why?” Notaro asked. “This is the jacket that you said looks like a sock puppet.”

“I gotta give myself a little credit,” Paulson responded. “That’s exactly what you look like.”

Paulson and Notaro tackled a few listener questions, including one from a couple who asked if they should tell their friends that their homemade baked goods are “sub-par.” Neither performer tried to upstage each other, so they had the space to poke fun at one another, laugh and be laughed at. The best comedic moment comes at the end of the podcast when Notaro asks Paulson for her best imitation of an auctioneer. Though I have to say, you might have to just watch that part for yourself.

What Notaro has also managed to do seamlessly with her podcast is to amplify LGBTQ voices. Her roster of LGBTQ guests, besides Paulson, include Robin Roberts, the Indigo Girls, Roxane Gay, Glennon Doyle, and fellow PANTS podcasters and The L Word stars Leisha Hailey and Kate Moennig.

As a lesbian, I have searched for this kind of representation ever since I was a kid. It wasn’t until my best friend and I started making elaborate collages of Jodie Foster in the early ’90s that we learned we were creating some sort of representation for ourselves. Every time I listen to the podcast, I’m reminded that the young gay kid who tore all those magazines can rest easy, knowing she’s no longer alone.

You Didn't See SNL's Best Dan Levy Sketch, Lampooning Toxic Masculinity, Because It Was Cut for Time. So Watch It Now