For Women With ADHD, LadyHD Is The Gift That Keeps On Giving 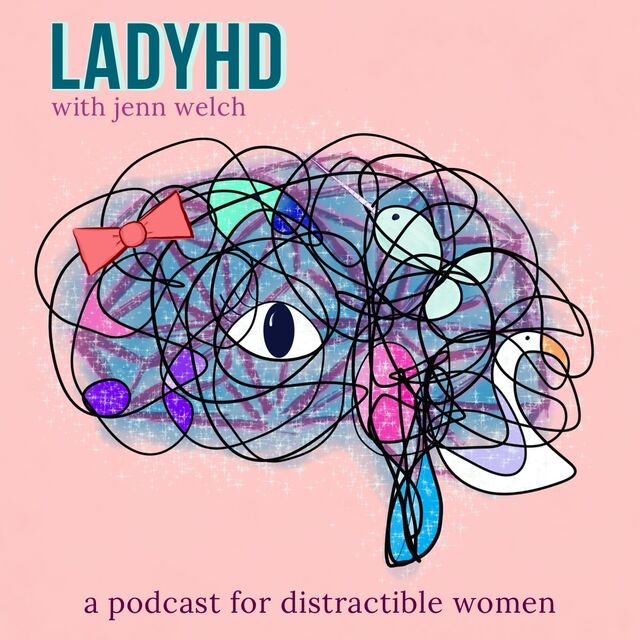 During my early school years, my lack of focus was often attributed by teachers as a lack of discipline. If I just worked, studied, or tried harder, I would be “on track.” If I could just do this one thing that was seemingly within my control, I would be on the deceptively linear path to success. I would be excellent. Oddly, the truth of the matter was that I was working hard. I would take notes and stay after school for extra help and then come to school early for some more help.

I bought any folder and planner that promised me a more streamlined method of organization. Cute, novelty calendars and Post-It lists were my traditional stocking stuffers from Santa. I bought organizing systems for my organizing systems. The Container Store was both my heaven and hell. (Now, in my cottagecore phase, I can’t get enough wicker baskets.) Time management is synonymous with cryptography for me. Full disclosure, it's taken me so long to get this article out because I keep miscalculating time and then feeling bad about it. It wasn’t until I hit early adulthood that I was diagnosed with ADHD, and even though it made sense, I was still skeptical.

My story isn’t uncommon. According to Dr. Ellen Littman, current attitudes towards women with ADHD can be based on outdated diagnostic criteria. “Early referrals to psychiatric clinics were motivated by the difficulty of managing hyperactive, impulsive, willful children, the great majority of whom were young white boys,” notes Littman. ADHD does not look the same in boys and girls. Misunderstandings and misdiagnoses surrounding women with ADHD can lead to years of unnecessary struggling, low self-esteem, loneliness, and believing that something is inherently “wrong” with them. This is why I was delighted to discover LadyHD: A Podcast For Distractible Women, from comedian and writer Jenn Welch.

After being diagnosed at 28, Welch found the challenges of being a woman with ADHD to be especially difficult because of traditional expectations of women regarding domestic and emotional labor. While researching her diagnoses, Welch noticed that “much of what was out there didn’t necessarily apply to me, it was kind of mentioned as an aside,” because like most women, her type of ADHD isn’t hyperactive it’s inattentive.

These revelations sparked an idea for what eventually became her podcast’s title. “It just popped into my head that I don’t have ADHD, I have LadyHD because it just felt so different,” said Welch in an interview with BUST. She wanted a creative space where she could “talk to other women with ADHD just as ourselves, without trying to mask our symptoms or without trying to ‘fit in.’” She also wanted her podcast to be fun and lighthearted, “because I don’t want to listen to somebody tell me how to be better. I already spent all day long trying to be better, you know?”

Welch has certainly achieved that with LadyHD. The podcast nails the tricky combination of clever, informative, and thoughtful. LadyHD is stacked with interviews from guests such as writer and actor Mara Wilson, writer and comedian May Wilkerson, and other various ladies with ADHD. Discussions tackle subjects like open-office spaces, daydreaming, diagnosis disbelief, and other ADHD-related matters that had me shouting into my phone, “Same here! Someone gets it!”

The podcast also has regular installments of LadyHD: Whatcha Googlin’?, a series of shorter episodes where Welch and her producer, Tristan Miller, go through the many many open Safari tabs in Welch’s iPhone. Now that’s what I call #relatablecontent. LadyHD provides all sorts of delights for listeners but what struck me the most was recognizing how I’m not alone in my experience, something Welch had also discovered through recording the podcast. “I didn’t realize how lonely ADHD has been and I think for many women it’s so internal and we don’t talk about it and we try to mask it,” she noted. But thanks to Welch and LadyHD, people are talking and I, along with many others, am grateful to listen.

How To Support Your Chronically Ill Friends During The Holidays