Feminist Comedian Lizz Winstead, Co-Creator Of "The Daily Show," Wants You To Laugh To Keep From Crying: Bust Interview 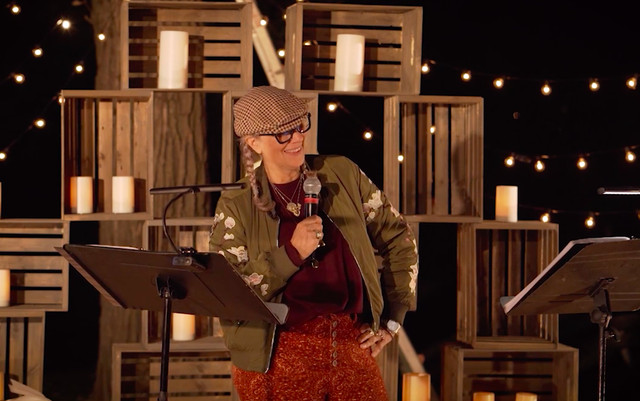 In the year of the pivot, comedians have had to get creative with their venues. At least for now, the days of packed, basement-dark comedy clubs and soaring, Liberace-esque amphitheaters are gone. Instead, many are turning to the expanse (and the safety) of the great outdoors for their performances.

Lizz Winstead’s new special, “Corona Borealis: A Night of Comedy Under the Stars,” invited attendees in her home state of Minnesota to laugh through the pain of 2020 with her—on a lake. Proceeds from the special, which is available to stream on Vimeo for $3.99 or to purchase for $9.99, go toward Winstead’s non-profit, Abortion Access Front.

“It dawned on me as I was taking these daily walks around the myriad of lakes in the Twin Cities and watching so many people out and about on the water, finding their peace there, that I could set up a stage on the shore of a lake,” Winstead says.

The co-creator of “The Daily Show” performed the first half of “Corona Borealis: A Night Of Comedy Under the Stars” on Lake Johanna in Arden Hills to a crowd of 20 as they bobbed in their two-person kayaks. “In normal comedy specials,” Winstead says, “there’s this universal feel to them. It’s in a theater and there’s a lot of people and the laughter is huge and it’s very slick. One thing I didn’t think about, though, is that when you do a show in the woods at night, your ambient noise is crickets—the literal sound of bombing your comedy,” she says, laughing.

From COVID-19 to the passing of her sister, Winstead tackles big topics in the special that often feel too immense to even think about, much less find the humor in. “Of course,” Winstead adds, “I couldn’t do the special without also reacting to the election.” During the second half of “Corona Borealis,” attendees huddled around bonfires, chowing down on homemade dinners that Winstead prepared and individually packed herself, reveling in the catharsis of the election results.

But, like all good things in 2020, something had to go wrong. Shortly after the special's premiere on November 25, Winstead realized that she was unable to promote it on social media: Twitter had blocked her from taking out advertising due to alleged profanity in her feed and bio. Facebook and Instagram had done the same thing. According to Winstead, the only part of her bio that could possibly be interpreted as profanity is the word "abortion."

Abortion Access Front’s mission, since Winstead began the organization, has been to advocate for reproductive rights through humor while providing independent clinics with aid. “I’m doing this self-funded special trying to raise money for my non-profit and now I can’t take out advertising,” Winstead says. “All I can do is reach out to my friends and do interviews. I’m doing everything I can—except the thing that would be most impactful, which would be to advertise it.”

Winstead created “Corona Borealis”  not only for Abortion Access Front, but also for people who need a little joy in these dark times. “I wanted anyone who has been going through the shit to have an escape,” she says.

Stream or purchase “Corona Borealis: A Night of Comedy Under the Stars” and click here to learn more about Abortion Access Front.

Image captured from Corona Borealis: A Night of Comedy Under the Stars

5 Funny, Feminist Podcasts You'll Want To Cozy Up With All Winter Long

Tags: Lizz Winstead , Corona Borealis: A Night of Comedy Under the Stars , comedy , politics , 2020 , Covid-19 , Abortion Access Front , The Daily Show , Censorship
Support Feminist Media!
During these troubling political times, independent feminist media is more vital than ever. If our bold, uncensored reporting on women’s issues is important to you, please consider making a donation of $5, $25, $50, or whatever you can afford, to protect and sustain BUST.com.
Thanks so much—we can’t spell BUST without U.