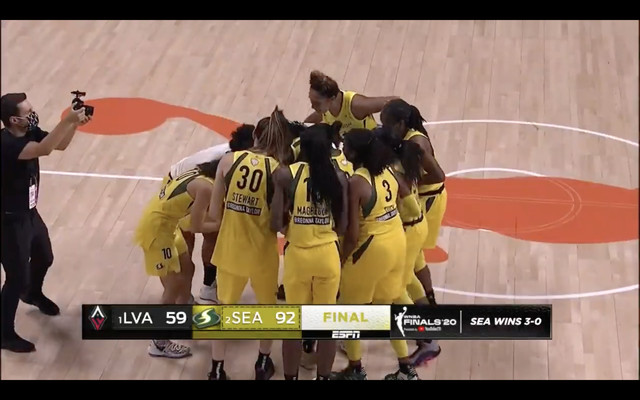 The Seattle Storm, led by Sue Bird and Breonna Stewart, beat the Las Vegas Aces at the WNBA championship Tuesday night to win the title with a record-breaking margin of 33-points. This is the team’s fourth title in 16 years and Bird has been around for all of them. As she watched her teammates dominate the Las Vegas Aces she said, “The fact that I’m sitting here, I think I’m having this, like, in-shock moment because it doesn’t really feel real that we just won and that I was able to contribute in the way that I did.”

The Seattle Storm’s win comes after a rocky 2019 season where both Bird and Stewart struggled with injuries. This finals season, the two powerhouses came back healed and stronger than before. Other players like the scoring guard Jewell Loyd, the defensive stronghold Natasha Howard and forward Alysha Clark stepped up to complement their newly healed teammates. Stewart secured the MVP title with a unanimous vote.

This electrifying championship run ended the shortened 22-game season played in a bubble at the IMG Academy in Florida to follow strict Covid-19 precautions. Players could not leave the bubble, often called the ‘Wubble,’ for upwards of 40 days. The WNBA reported that six players brought their children with them into the bubble and one Seattle player, Sami Whitcomb, left the ‘wubble’ before the finals to be with her wife as she gave birth.

The 2020 WNBA season was not only molded by Covid-19 complications but also the uprisings for the Black Lives Matter movement that sent millions of Americans into the streets. Both the NBA and WNBA used their platforms this season to spread their support for Black lives and the Say Her Name campaign. Political protest is not a new part of the WNBA; throughout the years players have campaigned for stricter gun laws, abortion rights and justice for victims of police violence. This year, the association dedicated their season to Breonna Taylor and launched a social justice council that aims to “address the country’s long history of inequality, implicit bias and systemic racism that has targeted black and brown communities.”

The Seattle Storm has been in this fight since their first game, walking off the court during the National Anthem and holding a 26-second moment of silence for Breonna Taylor. Now, two months later, they won the championship with Taylor’s name still emblazoned on their jerseys. Reflecting on the season Clark said, “It’s a championship for little Black girls and Black women across the country, honestly. I said it after the game, when I was letting it all soak in: ‘I hope each and every one of them feels just as victorious in this moment as I do, because you should. We see you, we hear you. We acknowledge you, and your life matters.’"