This Sarah Paulson Dancing Trend on TikTok Cured My Anxiety, I Swear 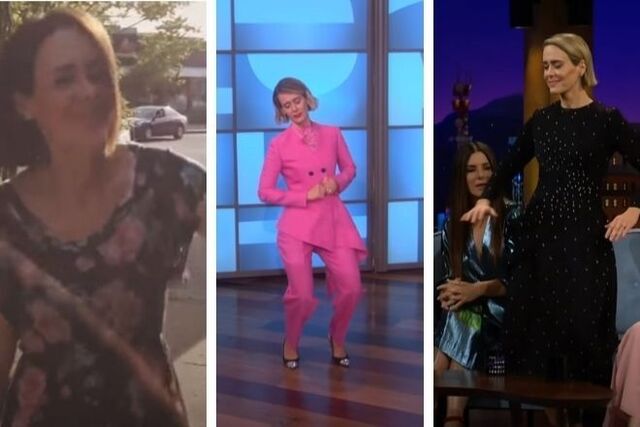 I have loved Sarah Paulson for a long time. I remember the exact moment—Picture it, Connecticut, sometime between 1999-2001. I’m watching Juliette Lewis in The Other Sister, a rom-com about a mentally disabled woman and in appears a young Sarah Paulson as her estranged lesbian sister. I dont know, something about her lisp was adorable to me, or I felt bad that her character was ostracized by her family because she was gay, but I decided she was one of my favorite actors from that minor role. I love her so much, so much in fact, I do not wish to acknowledge her role as Mistress Mary Epps in 12 Years A Slave, in which she played a slave owner’s vicious wife who scratched Lupita Nyong’o’s character in the face.

Years later Paulson would solidify her place in my heart as Lana Winters in American Horror Story: Asylum. [Asylum is the best of the anthology series, plot holes be damned. Argue with your mother, not me. Yes, Coven was iconic and started off so strongly, but the racial aspect was tone-deaf and very white apologist].

Anyway, Sarah Paulson has been making waves on the app most popular with Gen Z for a while now. Maybe it’s her phenomenal work on screen or maybe it’s her social justice allyship off screen. But this TikTok below sums up my feelings for her perfectly.

So imagine my surprise when Sarah Paulson getting down to a rap by JT of City Girls popped up on my for you page. TikTok user @braydenokden started the trend Monday, declaring Paulson’s hot girl certification had long been approved.

It didn’t take long for the Nurse Ratched star’s candid dancing from a 2018 Ellen Show appearance dubbed over “Said Sum” by Moneybagg Yo featuring Da Baby and City Girls to go viral. Other users followed suit and inserted more of Paulson’s dancing over the track.

She really is a queen, hoe.

it’s not she’s so white i love it! no she know how to get down purrrddd

This one is the best, because it’s very reminiscent of that one friend that is a little too lit during brunch

my wife has the hype rn ##sarahpaulson

How can you not love her?

Not to be outdone, TikTok users started to add other beloved, middle-aged white actors

It is only Wednesday. I cannot wait to see where this trend goes.

You Had Us At Sarah Paulson: Ryan Murphy’s 'Ratched' Is The Villain Origin Story We’ve Been Waiting For