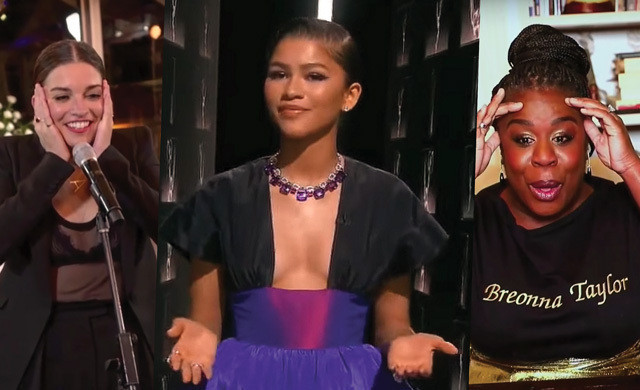 The important meaning behind Sandra Oh’s jacket, Zendaya’s historic win and Catherine O’Hara’s long overdue victory made last night's 72nd annual Emmy awards one for the books. Last year the Emmys were heralded as a great awards show for female representation and although it is true that many talented women scored awards that night, they all had one thing in common: their whiteness.

When Michelle Williams won the 2019 Emmy for Lead Actress in a Limited Series she said, “The next time a woman, and especially a woman of color — because she stands to make 52 cents on the dollar compared to her white, male counterpart — tells you what she needs in order to do her job — listen to her.”

This year the Emmys, perhaps in response to Williams' call, attempted to rectify this; three out of the five people nominated for Lead Actress in a Limited Series were Black women. In the other categories though, white female inclusion still seemed to count as diversity; four out of the six people nominated for Director of a Limited Series were white women.

Thankfully, not only were women nominated but they also did a lot of winning. And, although a somewhat tired Jimmy Kimmel hosted, the female nominations and wins felt just as sweet. Here are BUST’s favorite moments (in no particular order):

In perhaps the most exciting moment of the night, Zendaya became the youngest winner of the Lead Actress in a Limited Series award for her role as Rue in HBO’s “Euphoria.” She accepted the golden statue surrounded by family and friends who made the whole affair seem much more like the typical, exciting award show.

Catherine O’Hara, a comedic legend, added to the “Schitt’s Creek” sweep of the comedy categories by winning Lead Actress in a Comedy Series for her character Moira. O’Hara last won an Emmy in 1982 for comedy writing but has had our hearts ever since Moira graced our TV’s five years ago. In her acceptance speech, O’Hara remarked that the visibility of a complex, funny and dramatic older female character is not only liberating for herself but also for many other women. She said, “I will forever be grateful to Eugene and Daniel Levy for the opportunity to play a woman of a certain age — my age — who gets to fully be her ridiculous self.”

Following in her costars footsteps, Annie Murphy won Supporting Actress in a Comedy Series for her role as Alexis on "Schitt's Creek." In her acceptance speech she said, “I’m so proud to be a part of a show that stands for love, kindness and inclusivity and acceptance. Those are things that we need more than ever right now.”

For the second year in a row, Julia Garner won Supporting Actress in a Drama Series for her role in Netflix’s “Ozark.” This win was unexpected and Garner was physically affected by the shock but still took time to thank her fellow nominees saying, “You are the reason why I’m acting in the first place.”

Regina King won a golden statue for her role in the HBO series, “Watchmen,” a show that got ample attention at last night’s awards. Her win as Lead Actress in a Limited Series or Movie as a Black female superhero is legendary and much deserved.

For her role depicting Shirley Chisholm in the show “Mrs. America,” Uzo Aduba won Supporting Actress in a Limited Series or Movie. Aduba left the virtual ceremony early to celebrate with her mother but before she did, she gave Chisholm a reverent thank you for paving the way. Aduba said, "In a time when - for women, black women, women of color - who were supposed to occupy a very narrow amount of space, she was not afraid to dare and live up to the fullness of her potential.”

Both Uzo Aduba and Regina King used their screen time as Emmy winners to bring attention back to Breonna Taylor, the Black woman who was murdered by police in her Louisville home in March. Aduba sported a t-shirt with Taylor’s name and King donned her likeness under a pink suit. These two actresses constantly remind their audiences where the focus should be.

Although Sandra Oh didn’t win an Emmy she still took the screen time opportunity to send a message. Her custom bomber jacket was made by a Korean-American brand, KoreLimited who used elements of both the Korean hanbok dress and the Black Lives Matter movement. The front of the jacket sported the words “Black Lives Are Precious” in Korean. Her support for this brand and her fellow female nominees is enough to keep us stanning for another year.

sandra oh is wearing a jacket and mask in support of the black lives matter movement to the #emmys pic.twitter.com/aVKTlYHVVR

"A Black Lady Sketch Show" lost in the Variety Sketch Show category to Saturday Night Live which is, in and of itself, a funny joke. A Black Lady Sketch Show, which starred Robin Thede, Ashley Nicole Black, Quinta Brunson and Gabriella Dennis, was fresh, hilarious and a welcome addition to the sketch show universe. With, or without an Emmy, they’re still winners in our hearts.

The 72nd Emmy’s provided a short break from the daily news cycle and encouraged us to celebrate female talent from the past year. Now, if you trust their judgement (but mostly ours), you must go enjoy “Schitt’s Creek,” “Euphoria” and “A Black Lady Sketch Show.”

"Being a bad bitch is an honor."

Tomorrow @robinthede will be joined on IG LIVE by Emmy-nominated season 1 guest star @ImAngelaBassett and director @dimedavis to discuss the iconic “Bad Bitch Support Group” at 6pm ET. Share your questions below and you just may get it answered! pic.twitter.com/pR5pHxlrDs