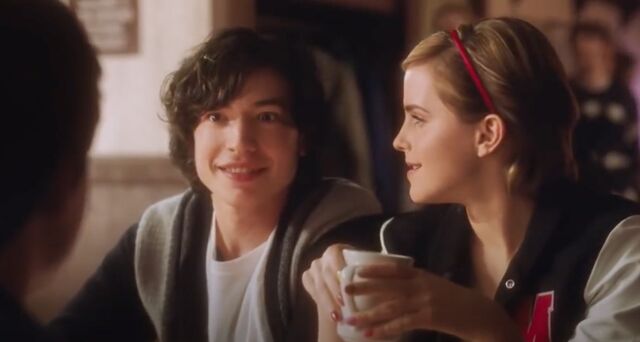 The first time the word “bulimic” caught my attention was while watching The Perks of Being a Wallflower when I was twelve. Early on, we are introduced to Sam (Emma Watson), the main character’s enigmatic love interest. At the end of the scene, she randomly says, giggling, “I’m not bulimic, I’m a bulimist…I love bulimia!” I remember being confused as to what exactly this meant, and why it was funny.

Eight years later, I’m still not sure. Nowhere in the film is she shown to have an eating disorder, so presumably, the line is somehow meant to reflect her lovable quirkiness. Looking back on the flippancy of that line at twenty-one years old, though, in recovery from the bulimia that completely derailed my time at university, I began to think about how the cultural narrative around bulimia, or lack thereof, has subconsciously perpetuated the idea that it isn’t a “real” eating disorder in the same way that anorexia is. The reality is this: bulimia nervosa is a mental illness, characterized by regular episodes of binge eating and purging, which can cause long-term and even life-threatening damage to the body. It can affect people of all ethnicities and socioeconomic backgrounds, often caused by a mixture of genetic as well as environmental factors. Often linked with OCD, depression, and anxiety disorder, those with bulimia are 7.5 times more likely to die through suicide than the general population. And yet, according to the media, it’s either funny, or it’s simply feminine vanity in its purest form.

Time and again, bulimia jibes are gleefully tossed around in the catty dialogue of popular girls in teen movies. “Grow up, Heather. Bulimia is so ’87,” says clique dictator Heather Chandler to her verbal punching bag Heather Duke in the ’80s classic Heathers. “Miss Phlegm” and “mega bitch,” as she’s labeled by rebel Veronica (Winona Ryder), is a vacuous sheep, then a vacuous bully, and her bulimia is used as an early indicator of her weak character. In 2002’s The Hot Chick, the titular character (Rachel McAdams) turns to a rival hot chick and jabs, “Wow…are you eating less or barfing more?” (The girl’s friend confirms, in a deadpan voice, “Barfing more.”) These are just a couple in a stack of throwaway lines that advertise bulimia as the habit of superficial white women, which can be turned on and off at will.

The modern epidemic of the distorted body image has been partly fuelled by the media’s reverence for thinness. Pink has always used her platform as a singer to reject this, raging against the music industry machine as it manufactured its reliable cash cow of cookie-cutter, bubblegum pop princesses. This is admirable, but in her 2006 music video for “Stupid Girls,” she mocks bulimia alongside extreme boob jobs and publicized sex tapes as behavior specific to hyper-sexualized, unambitious women. In the video, she adopts a stereotypical “valley girl” persona, moaning that she’s “so not sexy” for eating more than three hundred calories that day. She proceeds to stick a toothbrush aggressively down her throat, showing a close-up of vomit, and she says, manically, “I will be skinny!” Pink was praised by critics for this “hilarious feminist romp,” as per The L.A. Times, that “dismisses the bimbos” (The New York Times), and at the time, no one seemed to take issue with its explicit trivialization of an eating disorder.

And even on the handful of occasions that bulimia is taken more seriously, it is treated as a short-term problem, swiftly discovered by a loved one and nipped in the bud. In the first season of the iconic TV show Gossip Girl, Blair Waldorf’s (Leighton Meester) history of bulimia, which the novel explores in detail, is packaged neatly into one scene, in which she binges and purges in response to an emotional trigger, and we see a vague flashback of past instances. As Blair cries prettily on the bathroom floor, her best friend (Blake Lively) comes to the rescue to console her. In the next scene, Blair is back to her confident self, seemingly for the rest of the show’s duration. Her bulimia never re-emerges, nor does it affect her relationship with food, as though the producers decided that it wasn’t a sexy enough extended storyline for a show focusing on illicit high school love triangles.

Woven together, these watered-down interpretations form an image of bulimia as the easy weight loss tactic of young white women, with minimal side effects, as well as a recurrent condemnation of the type of person who develops it.

In my own case, bulimia developed out of months of food restriction, during a period of depression I felt helpless to overcome. I had never heard about bulimia’s health risks, and how it can develop into something that completely consumes and warps your mindset and body image. The women with bulimia in film and TV are generally healthy-looking and free of “real problems.” I had to learn firsthand the complete havoc it wreaks on the body, both physically and mentally. After half a year, my face was so stripped of color due to a lack of nutrients, my salivary glands so swollen and throat so sore from regular purging, that friends and university tutors would often ask if I was ill. After a year, I had been throwing my electrolytes so out of balance and putting my heart under such a strain that I began needing weekly blood tests. Bleeding and receding gums, which I soon realized indicated gum disease, marked a year and a half. Relentless tiredness, migraines, and stomach pains weren’t enough to break the rigid cycle that I was completely oppressed by and yet dependent on. I withdrew from social situations, and my university work, family relationships, and self-esteem deteriorated. It was an all-consuming addiction which would have driven me to drop out of my third year of university, had COVID-19 measures not sent everyone home anyway.

Quarantining with my family magnified the stigma around bulimia for me. A few times when my sister and I got into arguments, she would throw my eating disorder in my face to embarrass me. I realize now that she wasn’t trying to be cruel, because without a visual sign in the form of extreme weight loss or gain, it’s perhaps easier to view it as a strange mixture of greed and vanity. Though concerned, my parents often responded with anger and confusion as to why I couldn’t just snap out of it. And I can see my personal shame mirrored in others with bulimia. Tucked away in a corner of Reddit, people with bulimia share how much they want to stop the cycle but feel too far gone, many having struggled for over ten years, and coping with a reluctance to share their problem with loved ones.

The misrepresentation of bulimia feeds into this shame and the unhelpful push to “get over it.” The scraps of comfort I found in Princess Diana, Demi Lovato, and Jane Fonda, three admired women, talking candidly about their struggles with bulimia for a number of years, first encouraged me to admit my problem. Perhaps if the media opted for more honest and compassionate representations like these, the taboo that partly endorses the shame and tendency to keep bulimic behavior a secret might begin to shatter. As it stands now, though, the fact that I have written “bulimia” more times in this article than I have ever felt comfortable to say aloud perhaps says something.

Top photo: Perks of Being a Wallflower, via YouTube

Why I Spend Three Hours a Day Looking in The Mirror

Gigi Michie has recently graduated from Cambridge University with a degree in Classics, and is now working as a freelance journalist. Her interests include reading, writing and watching films (the good and the trashy). She can be found at mythoutofwater.com and on Instagram @gigimichie.

Tags: bulimia , eating disorders , Gossip Girl , Perks of Being a Wallflower , Heathers , recovery
Support Feminist Media!
During these troubling political times, independent feminist media is more vital than ever. If our bold, uncensored reporting on women’s issues is important to you, please consider making a donation of $5, $25, $50, or whatever you can afford, to protect and sustain BUST.com.
Thanks so much—we can’t spell BUST without U.