Sarah Stiles on Her New EP, Her "Steven Universe" Role, And How You Can Help Broadway During COVID: BUST Interview 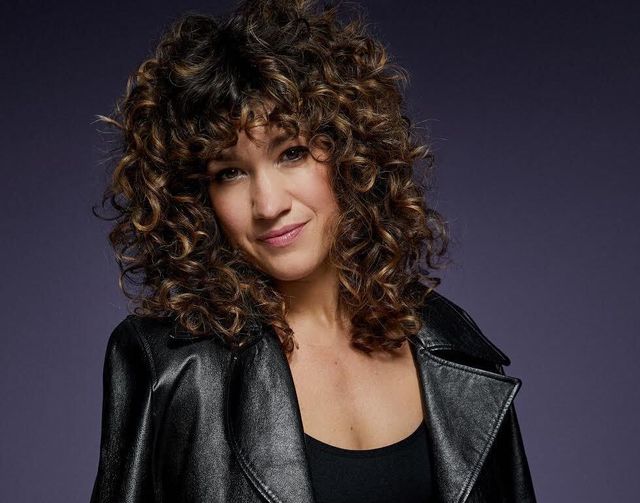 Broadway star Sarah Stiles, who also voices Steven Universe’s Spinel, has been doing a lot in quarantine. Considering she is a self-diagnosed workaholic, she’s been trying to occupy as much of her time as possible. She’s been driving around upstate New York with her fiancé, Jeff, and their new dog, Patti. And, like many of us, Stiles has tried her hand at the usual "snowed-in" activities like puzzling and drawing in coloring books.

On August 21, Stiles’ hard work payed off with the release of her first EP, You Can Ukulele With Me, a joyous and inspiring collection of songs that are essential to listen to during these dark times. Much like her musical inspiration Cyndi Lauper, who she calls “a ferocious peanut person with all that fire and fun and whimsy,” Stiles’ new EP is filled with upbeat and peppy songs each featuring a ukulele accompaniment. While she only recently began playing ukulele for this album, though honestly nobody could possibly tell, Stiles said she will definitely be using the instrument again for future music.

“It is such a summer-y kind of album. If you can find a little spot on earth and put your earbuds in and be in the sunshine, I think that would be the most glorious way to listen to it,” Stiles said. Although all her songs are like babies to her, her favorite is "A Simple Song of Love (The La La Song)."

You Can Ukulele With Me was a project she had been working on with her friend Holly Gewandter for a while. Gewandter wrote all the songs and thought Stiles was the perfect person to make them become a reality. It was recorded before lockdown and started out as fun collection of songs about the beauty and quirkiness of the world. But, while remixing and remastering it in quarantine, a more heartfelt and encouraging message about the state of the world revealed itself.

"That final song ‘Waiting For The Light’, I couldn't help thinking about it, as I was leaning out my window at 7pm cheering with my neighbors [for the] essential workers. It was really living inside me in a different way than when we recorded it."

“We recorded [the EP] because we wanted to put something lovable and joyous and happy out into the world and it was really important to Holly and I that people listen to it and felt warm and fuzzy feelings. So that's what our hope was but it's been interesting because since mixing it and mastering it all during quarantine, and this is such a trying time and challenging for so many reasons, it resonates with me in a totally different way,” Stiles said. “That final song ‘Waiting For The Light,’ I couldn't help thinking about it, as I was leaning out my window at 7pm cheering with my neighbors [for the] essential workers. It was really living inside me in a different way than when we recorded it. I hope it can make people happy but also give people a little hope about the future. That would be my dream if people could take that away from it.”

Although she came into Steven Universe a little late, Stiles realized early how special and important Rebecca Sugar’s work was to so many people, including herself. Working on Steven Universe: The Movie inspired Stiles to finish the EP with Gewandter.

“I will say truly, working on that musical and recording that music really lit a fire in my belly to get this album done. [With] 'Drift Away' and 'Other Friends', I just had such a great time doing that music, and I really wanted to keep recording music. That's when I came back from that experience and got on the phone with Holly and I was like ‘Holly we got to really have to make this album happen’ and that's really when we started getting serious about it.” Stiles said.

Stiles mostly does comedies, like her shows Billions and Get Shorty. She said it's because she is just a really funny person, and we have to agree. Stiles loves working in comedies, especially live comedies, because you get a response right away. Her upcoming show The Crew, which was filmed infront of a live studio audience, is a new Netflix series with Kevin James about NASCAR. Although COVID halted production back in March, Stiles will play Beth, the office manager of a NASCAR garage and best friend of Kevin James' character.

After her incredible performance in Tootsie, Stiles hopes she will be able to go back on Broadway in the near future. She really feels for her friends in the theater world whose productions were cut short due to COVID as it was recently revealed that Broadway would be shut down until mid-2021, leaving many actors, musicians and crew members out of work.

"I know people are recording music; you can't stop any of us from creating."

There are a lot of ways that you can help Broadway, Stiles says. “A lot of my friends are teaching classes [and] they're doing different audio podcasts like audio plays. Broadway Podcast Network is doing a lot of great work and providing jobs for a lot of people that are out of work right now. I know people are recording music; you can't stop any of us from creating," she said. "So, I guess the thing that would help the most is [to] just get on your computers and Google your favorite performers and figure out where they are and what they're doing and if there's anything you can support them with. That would be the best thing.”

After the release of her first EP, Stiles is looking to her future as an actress and singer. “I just never want to stop working. That's been the hardest thing about this pandemic is just not being busy," she explained. "I love working. I love, love, love working. I love being exhausted after a really long day. And really, I just want to keep working with great people and telling great stories. That's what I want to do till the day I die. That's my goal.”

The Great Awakening: Punk Icon Mina Caputo On Being Trans, A Hardcore Pioneer, And On A Different Frequency

The Dark Side Of Tiktok: Tony Lopez, The Hype House, And A Toxic Environment Of Sexual Harassment