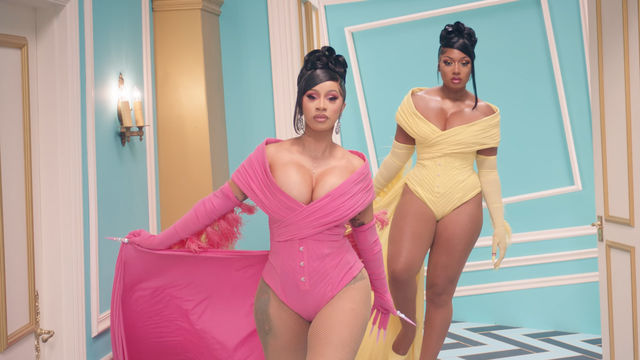 Ben Shapiro, conservative commentator and the king of bad takes, recently reacted to the new Cardi B and Megan Thee Stallion song, "WAP," on his show for the conservative outlet, The Daily Wire. And it’s a doozy to watch. Not only does Shapiro prove that he has no rhythm, but he also completely misses the point of the video. But despite how bad his take is, the video is kind of entertaining because of how bad it is. Throughout the video, Shapiro laments about the vulgarity of the song and says p-word instead of pussy.

People on Twitter were not slow to clown on Shapiro and his video.

The way Ben Shapiro says "p-word" in this video tells me he wouldn't know a wet one if he drowned in it https://t.co/3kDedGBKkt

The video has sparked a couple of comedic mashups of the song with his video and I gotta say, even though I hate Ben Shapiro with every fiber of my being, the remixes are entertaining.

Towards the end of his video, after he reads through the lyrics, Shapiro went on to make yet another bad take to add to his collection. “This is what feminists fought for. This is what the feminist movement was all about, and if you say anything differently it’s ’cause you’re a misogynist, see?” What this disgusting little man refuses to realize is that feminism is a multifaceted movement and that women talking about their pussy because they want to is not degrading.

Of course, with anything women do, Shapiro wasn’t the only man to open his mouth to give his opinion when he wasn’t asked. A Republican running for a congressional seat in California said that the two singers were raised “without God and without a strong father figure.” Errol Webber, another politician said that the song was “one big advertisement for promiscuity.”

Cardi B & Megan Thee Stallion are what happens when children are raised without God and without a strong father figure. Their new "song" The #WAP (which i heard accidentally) made me want to pour holy water in my ears and I feel sorry for future girls if this is their role model!

That new #WAP song by Cardi B and Megan Thee Stallion is exactly everything that is wrong with mainstream hip-hop culture.

Then you wonder why Planned Parenthood targets Black communities?

These comments were met with backlash, considering men have expressed their sexuality in music for so long and there’s nothing wrong with female sexuality.

Women have a right to express their sexuality to the same extent men do. I'm tired of the double standard. If you don't like #WAP, don't listen to it, but it didn't "set women back 100 years." Rather, it's evidence how far women have come in the last 100 years. #WAPMusicVideo

The fact that the song WAP is getting so much hate for “being overly sexualized” doesn’t sit right with me. Why is it okay for male rappers to rap about sex but when women do they’re hos?? ? Women are allowed to enjoy sex. I don’t like this double standard shit. ?‍♀️

Men like Ben Shapiro aren't mad about @iamcardib and @theestallion's "vulgar" language in #WAP , they're mad about women are exercising their sexuality without permission. I had some things to say about sexuality, power, and who's in control https://t.co/KfOasKTdHs

Cardi B even joined in on the fun of clowning on Shapiro. She posted a tweet reacting to the remix with a bunch of laughing crying emojis and posted another tweet commenting on how made conservatives were about the song. It's safe to say, that in like most instances, Cardi remains unbothered.

While you don’t have to like the music or the music video, the backlash these two rappers are getting from men is ridiculous, but obviously not unexpected. Women should be able to express their sexuality without being criticized for being exploitative, especially if they're expressing their sexuality on their own terms and in their own way.

Tags: Cardi B , Megan Thee Stallion , Normani , Rap , Music , Ben Shapiro , WAP , Music Video , music , Cardi B
Support Feminist Media!
During these troubling political times, independent feminist media is more vital than ever. If our bold, uncensored reporting on women’s issues is important to you, please consider making a donation of $5, $25, $50, or whatever you can afford, to protect and sustain BUST.com.
Thanks so much—we can’t spell BUST without U.