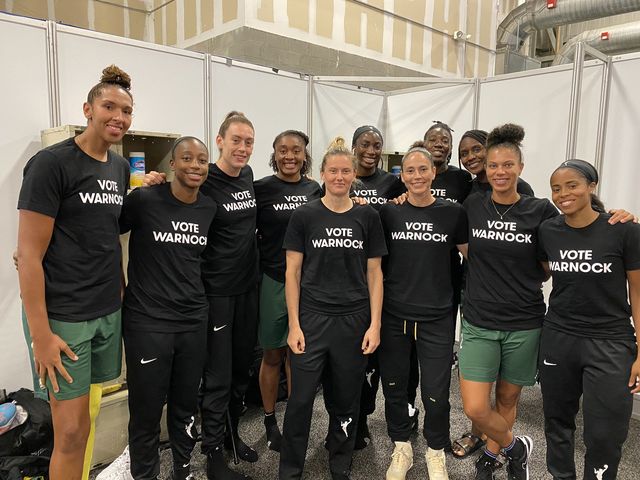 Elizabeth Williams, a player on the Atlanta Dream team, tweeted a quote from the late civil rights icon and longtime Georgia Representative John Lewis and posted a photo of herself wearing the incredible shirt. Williams encouraged others to support Warnock for Senator of Georgia and to vote in the upcoming election.

We are @wnba players, but like the late, great John Lewis said, we are also ordinary people with extraordinary vision. @ReverendWarnock has spent his life fighting for the people and we need him in Washington. Join the movement for a better Georgia at https://t.co/hC8iF9urak pic.twitter.com/mvN5e9m4oO

We are @wnba players, but like the late great John Lewis said, we are also ordinary people with extraordinary vision. @ReverendWarnock has spent his life fighting for the people and we need him in Washington. Join the movement for a better Georgia at https://t.co/yoJkjDeYy7 pic.twitter.com/IwK6xRqTIJ

other leagues are like “equality” or “we stand together” or “education reform” & the WNBA is out here like “vote the bigoted owner of our team out of office, we’re campaigning for her opponent”

everyone else better take notes & level the fuck up

Loeffler criticized the WNBA for their campaign. In a statement on Tuesday, she said, "This is just more proof that the out of control cancel culture wants to shut out anyone who disagrees with them. It's clear that the league is more concerned with playing politics than basketball." This isn’t “cancel culture” it’s just how politics and elections work. The WNBA players are just encouraging people to vote and pointing out how hypocritical Senator Loeffler is.

The WNBA has had problems with Loeffler for a while now. They first distanced themselves from Loeffler after she objected to the organization’s plans to support the Black Lives Matter movement. In protest, the Dream's players all signed a statement supporting the Black Lives Matter movement, emphasizing that it is not a political position but a "statement of humanity."

After Senator Loeffler wrote a letter that advised the WNBA that "to subscribe to a particular political agenda undermines the potential of the sport and sends a message of exclusion," she faced a lot of scrutiny. Many of her donors, like Sony and Target said they were reevaluating their support for her campaign.

Reverend Warnock said in a statement on Tuesday that he was "proud to stand with" the players. He also pointed out the players’ "courage and resolve" and accused Loeffler of trying to silence her players when they were seeking justice.

"Senator Loeffler and those like her who seek to silence and dismiss others when they speak up for justice have planted themselves on the wrong side of history. We are in a moment of generational, transformative change, and there is no place in that movement for bigotry." Warnock said. Even though Loeffler thought she had a home team advantage, this is a slam dunk we can get behind!