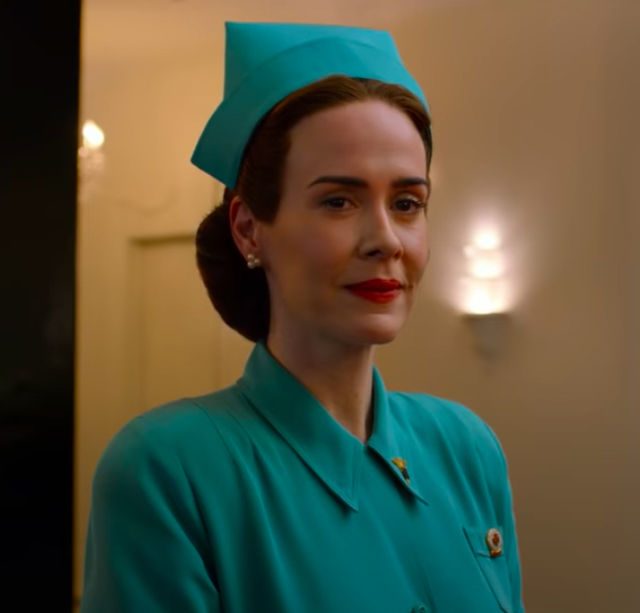 Sarah Paulson is one scary Nurse Ratched in Ryan Murphy and Ian Brennan’s One Flew Over the Cuckoo’s Nest origin Netflix series Ratched. Ryan Murphy setting a series in a mental institution with Sarah Paulson as the leading character seems suspiciously familiar…(*ahem* AHS: Asylum). But we have to admit, this one feels very different and a lot more sinister.

On August 4, Netflix premiered the first trailer for Ratched, which stars Sarah Paulson as the iconic villain from One Flew Over the Cuckoo’s Nest during her early years. It follows Ratched's evolution from caring nurse to twisted monster.

“We had a saying in the Corps. Save one life and you’re a hero. Save a hundred lives? Well then, you’re a nurse,” Ratched says in the newly released trailer. In the clips we’re shown, Ratched inflicts incredible pain on her patients, all while wearing extraordinarily chic outfits. People had a LOT to say about the trailer:

One thing Ms Sarah Paulson is going to give you is VERSATILITY pic.twitter.com/X17DRZUAFo

i have a thing for villains portrayed by sarah paulson pic.twitter.com/CyddjbPlCD

Considering its film predecessor is viewed by many to be one of the best movies of all time, Ratched is going to have to meet some cult fans’ very high standards to be considered canon. One Flew Over the Cuckoo's Nest became the second movie to win the Big Five awards: Best Picture, Director, Screenplay, Actor (Jack Nicholson), and Actress (Louise Fletcher, who played Nurse Ratched). Fletcher also won a Golden Globe Award and BAFTA Award for her performance.

But we think Sarah Paulson is the perfect fit for this role. After all, Paulson is a six-time Emmy nominee for her work on many other Murphy projects, like American Horror Story and American Crime Story: The People v. O.J. Simpson. “People may be looking for Louise Fletcher, and they’re not going to find her, and I don’t want to upset them,” Paulson said about her role.

Just hearing Paulson as Ratched whisper, almost crying to a patient, “You deserve someone to show you mercy. How different I would be if someone had,” is enough to give us goosebumps for the rest of the week. We think Paulson is perfectly capable of killing (no pun intended) this role.

"You know the legend, but do you know how it all began?" Paulson tweeted yesterday, alongside the trailer. The nine-episode first season will premiere on Netflix on September 18, and the show has already been picked up for a second season.

Check out the trailer below:

Tags: Sarah Paulson , Ryan Murphy , One Flew Over the Cuckoo's Nest , Nurse Ratched , Ratched , Netflix
Support Feminist Media!
During these troubling political times, independent feminist media is more vital than ever. If our bold, uncensored reporting on women’s issues is important to you, please consider making a donation of $5, $25, $50, or whatever you can afford, to protect and sustain BUST.com.
Thanks so much—we can’t spell BUST without U.