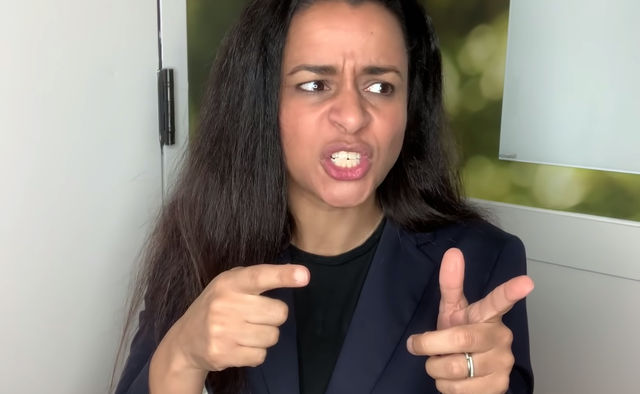 It’s official: we are less than 100 days away from the 2020 presidential election. And while the prospect of finally ousting Trump in the very near future is comforting to say the least, that doesn’t mean the next few months of having a racist cheeto in the oval office is going to be easy. As for the prospect of him getting re-elected? Let’s not even go there.

Everyday it seems like there are a dozen new articles and clips of the Trump Administration trying to do everything in their power to spew more conspiracy theories or carry out nefarious deeds with the time they have left. Constantly getting these updates to your phone is draining, and can make you want to pack everything up and move to a cottage in the forest far far away from the United States. Luckily, however, there is someone making all things Trump just the slightest bit easier to handle: writer and comedian Sarah Cooper.

Okay, so maybe Cooper isn’t making all things Trump easier to handle, but she proves that laughter might just be the best coping mechanism. Cooper, 42, is the author of 100 Tricks to Appear Smart in Meetings and How to Be Successful Without Hurting Men’s Feelings, two satirical books for feminists navigating the modern workplace. Once quarantine began in the U.S., the standup comedian and former Google employee began making short videos of herself lip-synching some of Trump’s more, how do we put this, idiotic utterances. One of her first short videos was “How To Medical,” a clip of her impersonating the President as he advised us all to ingest disinfectant as a means to cure COVID-19.

Since then, Cooper has been taking the Internet by storm, providing daily content to her millions of Twitter, Instagram, and TikTok followers poking fun at the POTUS.

How to empty seat

How to elements of bathrooms

Seriously, she impersonated Trump to a T, even down to his weird, sometimes unsettling, sniffles. One of her most recent videos, “How To Person Woman Man Camera TV” pokes fun at Trump’s latest Fox News interview in which he boasted about being able to remember 5 words for a cognitive test. Get this: you get extra points if you say them in order.

While there have been a number of parodies of this specific portion of the interview, Cooper’s is by far the most popular, with over 7.2 million views on Twitter. “It was 30 or 35 questions,” Trump states in the now famous audio. “The first questions are very easy, the last questions are much more difficult. Uhh--like a memory question.” In Cooper’s video, she proceeds to impersonate the president as he boasts about being able to say five words in order, “person, woman, man, camera, TV,” four times over the course of about 60 seconds. Her portrayal of both Trump and the journalist interviewing him are enough to make you fall out of your seat laughing. Plus, the little love shrine to Putin in the background is an added bonus.

After wowing audiences with her Trump impersonations, Cooper has garnered attention from a variety of news outlets and late night TV shows. In June, she was interviewed on The Tonight Show With Jimmy Fallon. “Trump is on television everyday doing these daily Coronavirus task force meetings and he’s just kind of BS-ing his way through the presidency as he usually does,” Cooper stated on how she started her Trump impressions. “I’m just looking at him and getting so frustrated because people are just nodding and pretending like what he’s saying is making sense...it reminded me of being in the corporate world and a business guy would come in and he would throw around some buzz words he just learned five minutes ago...So, I just grabbed some clips where he was saying something nonsensical and just pretended to be like one of those guys in a meeting.”

Cooper went on to explain how she brings these deranged audio clips of Trump to life, sighting how looking into the subtext of what he’s saying is the key to making her videos so wildly hilarious. To add to how iconic Cooper is, Trump has even blocked her Twitter, meaning he’s taken personal offense to her fun-filled videos. We love to see it.

On top of her impressions, Cooper’s Tweets that are unrelated to Trump will add some much needed laughter to the never ending struggle that is existing in the 2020 timeline:

I am not excited to have lived long enough to see the moment Madonna became a Karen pic.twitter.com/jn22ZGiZf5

We take moments of relief where we can get them. So, while you’re agonizing over what November 3rd will bring, give Sarah Cooper a follow. True, it won’t stop Trump from continuing to make outlandish statements, but at least you’ll get some enjoyment out of it when he does. You know, after the all-consuming panic.