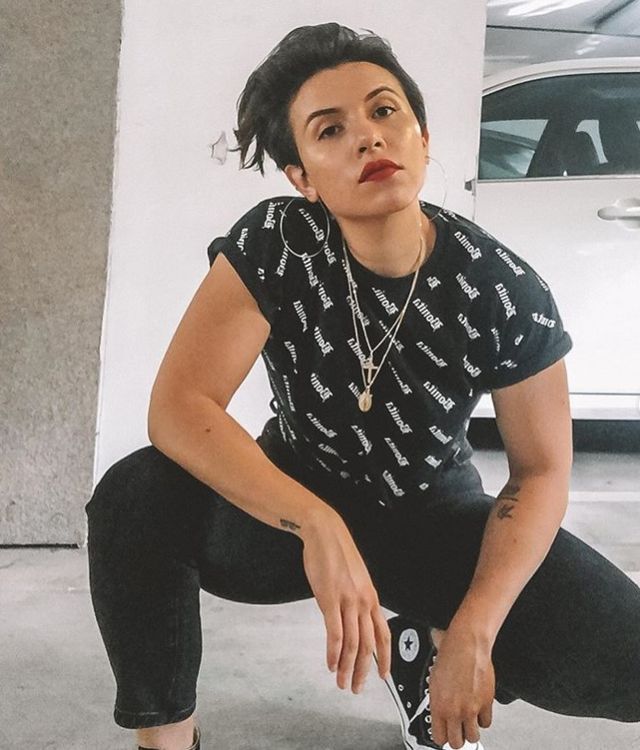 After George Floyd’s death sparked masses of Black Lives Matter protests, Latinx TV writer and QUIERO host Priscila Garcia-Jacquier’s DMs were flooded with people asking for her help. “I started receiving a lot of messages from fellow Latinx, extremely confused on how to stand at this moment. I ran my talk show for a while where I hosted Latinx entertainment, but suddenly the great voices in Hollywood were big silent in our community in this process,” Garcia-Jacquier said over Zoom. Garcia-Jacquier saw people reaching out to her because of her close proximity to the entertainers of Hollywood, asking how they could help. “And I’m like, oh, cool, where are ready to talk about the nuance of Latinidad? Let me start,” she said.

Latinidad, as defined on Wikipedia, is “a particular political experience but it also contains within it the complexities and contradictions of immigration, (post)(neo)colonialism, race, color, legal status, class, nation, language and the politics of location.” But largely with Latinidad, is erases Afro/Indigenous people in historical, political, and media representation.

"Latinidad is an academic term that failed because it erases race. For those of us who are Black Puerto Ricans or maybe identify as indigenous, what it really does is it just waters down who we are and it erases blackness. The whole term is flawed,” states Rosa Clemente, aBlack Puerto Rican journalist, organizer, and founder of Puerto Rico on the Map who was interviewed for The Nation on Latinidad.

We all know Shakira, J.Lo, Rosalía, Bad Bunny, Guerillo Del Toro, Alfonso Cuarón, and other light-skinned and white Latinx take center stage. But what we don’t see is Afro-Latinx and Indigenous people get recognition through cultural or political sovereignty and media representation. Latinidad fails to account for the blind spots and completely disregard for acknowledging and centering Afro/Indigenous voices and lives.

And how does one go about that? Taking on a topic that is messy, complex, and not so black-and-white? For Priscila, it’s about walking through transparency and vulnerability within identities and her own lived experiences. “I’ve had an interesting vantage point, living in three different countries. I grew up in Colombia, moved to France, and then moved to the States at nine. There were so many contexts with which to identify; my identity process has always come into question every step of the way,” she said.

Garcia-Jacquier recalls her upbringing as having the ability to live in the upper echelons of Colombian society and being known as an affluent white family. Even though her father is indigenous, her household family identifies as white. But it’s much more than that once geo-politics get involved: Garcia-Jacquier says the difference in her identities in the United States and in Colombia were complex. “I would gather my questioning of Latinidad started 20 years ago. Why is this identity being put on me? How is the construct of the US affecting the identity process?”

She saw no leaders in the Latinx community in Hollywood addressing the glaring nuance of Latinx identities. “I am really angry with our leaders in our community. They dipped. They dipped because nuance hasn’t been a part of the conversation, and I understand,” Garcia-Jacquier said. “This is not to put anyone down. The moment nuance is required, we don't have a dialogue for nuance.”

Garcia-Jacquier continued by expressing her disappointment with the community: “It just further highlighted how we can't show up when we are called as whole because of the lack of nuance and dialogue.”

Garcia-Jacquier's video, “Fellow Non-Black LatinX: We are f’ing up,” addresses the lack of accountability of white and white-passing Latinx people when it comes to injustice in the Black community because of privilege, unconscious or not. Garcia-Jacquier knew what she was doing by taking a combative approach. “It riled people up,” she said. “But I moved only further into specifics. [The] most effective learning tool for me is to use my own context, my own identity process.”

For Garcia-Jacquier, the identity and accountability-related tools she has picked up along the way can be taught. “One of my pillars is transparency. Half of people disagree with me. I want to acknowledge why that happens. The more transparent I am, the more helpful I am.”

And Garcia-Jacquier is not the first nor the last person to be talking about lack of accountability and white privilege in the Latinx community. Countless Afro-Latinx and Indigenous people have been spending decades voicing their issues and lack of representation in the media. Folks such as multimedia artist and poet Alán Pelaez Lopez, Yo Soy AfroLatina on Instagram, and Black Mexican poet Ariana Brown have all called others to action and for awareness of whiteness in Latinx communities.

“Part of my allyship as a white-passing person is patience. I need to have so much patience. Because I want people to be curious enough to sit at my table, and I want them to feel loved enough to stay. No matter how uncomfortable I make them,” Garcia-Jacquier says. “Because I have white skin. I need to have patience for this work for people who come to my table that Black/Indigenous folks don’t need to have.”

Going forward, Garcia-Jacquier's goal is to write TV shows and be able to grow Latinx representation from where it is now. “For me, it is so localized,” she says. “I just wanna write the stories I want without compromise. I want a place where we can stand in our complexities and be better allies and lead us to all our freedom.”

And compromise can be a hard thing to find, especially in the Hollywood Industry. Latinx actor John Leguizamo tweeted shortly after the Emmys nominations, “Why can’t we Latinx have a piece of the pie? We are the largest ethnic group in America and missing as if we didn’t exist!”

To Garcia-Jacquier, this meant that the fabrication of Latinidad or“Latino/x conglomerate” of Hollywood is rooted in numbers, rooted in mimicking the political voting power of Latinos. And it doesn’t work. “As we saw last week, the narrative really only behooves certain ones amongst us. And who that is has everything to do with skin color. When Black, Afro-Latinx, Indigenous, and Afro-Indigenous members of the Latinx community say they are erased by the narrative of Latinidad as told by the most visible LatinX, we need to listen," she said. "The point isn’t just to create a more inclusive construct of Latinidad. The point is to challenge the construct all together."

To find more of Priscila Garcia-Jacquier’s work, check out her Instagram and her digital talk show QUIERO.