Welcome to WitchTok, The Meeting Place For Gen Z and Millennial Magick 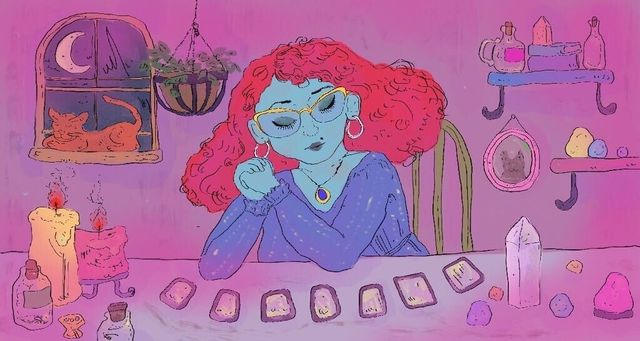 TikTok pretty much has it all. Over the course of the past few months, the video-sharing app has become one of the most used applications in the world. While most of the app’s users are between the ages of 13 and 24, TikTok has recently broken into the mainstream news cycle, making the world notice just how much power and influence this app has. In June, it became a catalyst for the Black Lives Matter movement, working as a platform for young activists to organize protests and acts of passive resistance. While the app persists as a meeting place for social justice work, it has also become a space for a variety of niche communities to gather, entertain, share stories, and pass along knowledge. With an active user base of 800 million, there are far too many communities to describe, but perhaps one of the most popular and most intriguing — as well as the most recent target of mainstream media’s attention — is WitchTok, the meeting place for Gen Z and Millennial magick.

We talked to a few popular content creators from the WitchTok community to learn more about the environment they’ve fostered online, what WitchTok is all about, why it’s so popular, and why the Internet couldn’t stop talking about it last weekend.

There are two ways of getting onto WitchTok. Either you type “WitchTok” into the search engine and encounter a number of videos showing off spell bottles, altars, and candles, or the the TikTok algorithm somehow picks up on your witchy vibes and your “For You Page” becomes flooded with videos of the above. I myself made it onto WitchTok by the latter method (probably by liking a few too many videos about crystals that had made their way onto my feed).

With over 2.2 billion views on the WitchTok hashtag, the online community has become a place for folks who practice witchcraft and other spiritual practices to share spell tutorials, tarot reading tactics, altar set-ups, Book of Shadows inspo, and crystal and occult object collections. While many of the witches on TikTok might be more inclined to practice solitary magic, one could label some of the facets of WitchTok as coven-like. Frankie (@chaoticwitchaunt), one of the top WitchTok creators on the app with nearly 400,000 followers and over 17 million likes, describes the community as just that. “Finding a community of witches that are sharing their practices and being there collectively to talk about witchcraft and helping each other is kind of really hard to come by,” she stated. “I’ve met so many of my friends from TikTok which I was not expecting at all...it gives me and a lot of others more access to knowledge because if you don’t know the answers, you can ask someone else.”

I’ll probably make a few videos talking about some of these too or a yt vid! ##witchling ##babywitchtips ##esofam ##witchtok

Frankie, who has been practicing witchcraft for seven years and describes herself as an Eclectic Neopagan (pulling from a variety of different open practices), noted that the only other similar communities that have seemed to spawn on the internet were a few rogue covens on Reddit, Tumblr, and Twitter awhile back. It seems that because WitchTok offers a form of face-to-face interaction with the uploading and sharing of short videos, and especially in the era of Coronavirus where all human contact is reduced to a minimum, the medium allows for the gathering and connection of witches that more traditional covens, or even wiccan festivals, would supply.

While the community tends to offer tips for spell-casting and material suggestions for rituals that are geared more towards individual use, there have been some calls for witches of all backgrounds to come together and use their powers for a single cause. Yeah, kind of like when Lana Del Rey proposed we all cast a spell against Donald Trump a few years back, but more organized. In June, witches on TikTok asked that everyone utilize the power of the full Strawberry Moon, which was also an eclipse in Sagittarius, to cast a protection spell for those protesting in the name of the Black Lives Matter movement. More recently, witches came together to cast a protection spell for the Indigenous peoples who were protesting on sacred Lakota Sioux land against Donald Trump’s speech and occupation at Mount Rushmore.

♬ princess and the frog is the superior disney movie - colloquialshirts

Overall, however, WitchTok is primarily a place of learning. “It’s super beneficial for people that are beginning because they have this wealth of practitioners that try their best to be accessible to answer questions,” Frankie said. Alexia (@thecharmeddoll), one of the other top WitchTok creators who meshes together Rootwork/African Spiritualism and Modern Witchcraft for her practices, stated, “The best aspects have been knowing that my spell tutorials help so many people to the new path and inspire others to practice!” Alexia is one of the first faces you’ll see when entering Witchtok, perhaps best known for showing tutorials on her handcrafted witch jars that can aid in health, anxiety-reduction, and protection.

Forgot to mention in my last tutorial, that you have to peel the skin!! ##witchesoftiktok ##witchtok ##babywitch ##hoodoo ##fyp ##foryoupage

While the vast majority of the WitchTok community is extremely positive, with a fair share of the app's signature classic Gen Z humor sprinkled throughout the hashtag amongst the craft sharing, the community has unfortunately become the victim of some negative responses. “There are definitely people who really don’t like witches and witchcraft and people who don’t think it exists,” Frankie stated. From radical Christians to those denying the existence of modern pagan practices to people misconstruing what witchcraft even means, it seems the animosity towards witches as a group has not entirely faded away over time.

“Exposing myself to people who do not support my practices has led to hateful comments and even death threats,” Alexia recalled.

♬ Ur Not A Witch - pixiespellss

I love my fellow witches? ##fem##lgbt##witch##psychic##foryoupage##fyp##bi##foryou##hippie##witchesoftiktok##witchtok##blessedbe##pagan

But one of the main things the witches of TikTok, who aim to foster a community of acceptance, are focusing on is putting an end to the stigmatization of witchcraft. “Why not de-stigmatize it and make it so people can explore that path if they want?” Frankie asked. “It’s such an amazing path and it’s done so much good for so many people.” Along with aiming to de-stigmatize wiccan practices, as well other spiritualities and forms of folk magic like Hoodoo, WitchTok is doing the most when it comes to engaging in anti-racist work and creating an inclusive environment for all. While this is certainly something mainstream media has picked up on, it’s interesting what really caught the attention of the media was a mishap that occurred last weekend.

You probably heard about it. BuzzFeed, Teen Vogue, Cosmopolitan, and even NPR all published articles on it. In case you aren’t privy to this steaming hot witch tea, essentially what happened was a group of novice witches, also called baby witches, hexed the Moon, the Celtic Fair Folk, and were attempting to hex the Sun and other important deities as well. The details are quite hazy, as some sources identify the creator of the hex as one individual. Needless to say, the news caused quite a bit of hysteria and panic amongst both members of the community and outside individuals.

WHAT’S GOING ON WITH THE MOON?
✨
a thread, because everyone is confused.

Thankfully, Frankie, your self-described Witch Aunt, had some thoughts that might quell your fears. “Being upset and having an emotional response when someone disrespects something you love like the Moon is normal,” Frankie told us. “But when you think about it in a different way, when you think about what a hex entails, it’s a very specific energetic tie and intent with a direct target — tying it to the moon seems a little difficult.” Like many more experienced witches, Frankie did not seem concerned about any short term or long term global effects. “Let say they did do it...and let's say they are baby witches or beginner witches,” she stated. “If they don’t know better than to try and hex the Moon, that hex isn’t going to do anything. If there was a mortal on earth that had the ability to mess with a celestial entity we’d have a lot of problems by now.”

keep in mind these are GODS/CELESTIAL OBJECTS we are talking abt. ✨let the universe take care of it✨ ##witchtok ##fyl

The general consensus from the majority of the witches on TikTok is that no, what the baby witches tried to do is not actually going to have an impact on the Moon, the Sun, the world, or you as an individual. Some actually seem more concerned for any negative repercussions the witches who attempted to hex the fae might have to face. Sydnie Jade (@yoxsyd), another popular content creator on the app noted, “[the fae] don’t mess around when it comes to someone trying to pull one over on them.” Sydnie Jade, who herself has been practicing witchcraft for six years and noted that one of the best aspects of the community is being able to interact with both baby witches and elder witches, said the best way to avoid something like this again is to educate yourself on the craft.

“It’s all about research and sadly this isn’t something you just know everything about overnight or even in a week or a month,” she said. “It takes years and years of practice and research, you never stop learning. That’s why I always say take your time, you have your whole life to learn. Take it step by step and start with the things that interest you in the moment!"

godd i love baby witches so much? ##witchtok

Moon hexing aside, WitchTok really is just a place for young witches of all backgrounds to share their knowledge and share their love for the craft. Along with the exchange of information, the community has also become a space for the exchange of goods as well. Alexia sells spell jars and jewelry, Frankie offers tarot readings via video session (both on Etsy, the longtime one-stop-shop for witchy wares), and Sydnie Jade sells high vibration candles and aura readings on Depop. While the mode for which witches convene may have changed, WitchTok radiates the same energy that has brought magickal people together to share their craft for centuries. “It is a safe place where I can post videos about my practices and not feel ashamed!” Alexia told BUST. “Witchtok supports me and it makes me happy that witches today have a space to be themselves!”

♬ ...And To Those I Love, Thanks For Sticking Around - $uicideboy$

So if you’re someone who practices witchcraft, or has always felt drawn to magick and the Wiccan path, you best be making your way over to WitchTok. As Frankie stated, “Come over here! We got tea, we got cookies!”