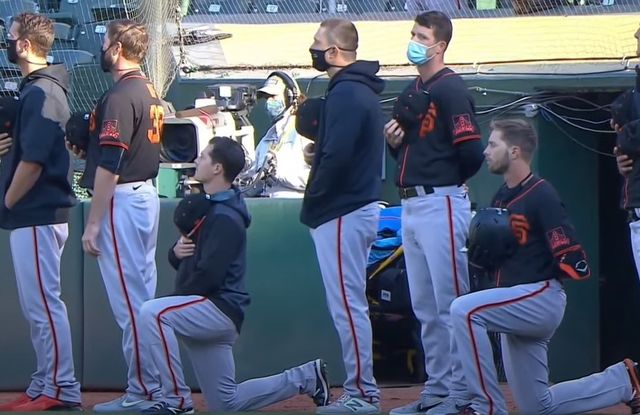 It looks like Colin Kaepernick—who still doesn’t have a job, by the way—was onto something with the whole kneeling thing.

“America’s Favorite Pastime” came back this week after the coronavirus shutdown for a shortened season. At this time, it’s not entirely clear whether or not audiences will be able to come and watch stadium games—if so, stadiums will most likely only be filled to 50 percent capacity.

On Monday, San Francisco players, coaches, training staff, and team manager Gabe Kapler took a knee during the national anthem to show solidarity with the Black Lives Matter movement, according to NBC News. The show of support was a planned team effort by Kapler. “I wanted to share what my plans were, and I did that because I wanted them to know that I wasn't pleased with the way our country has handled police brutality. I told them that I wanted to amplify their voices, and I wanted to amplify the voice of the Black community and marginalized communities as well," Kapler said.

The following day, a handful of Cincinnati Reds players did the same thing, many of whom also sported—ha, get it?—Black Lives Matter shirts during training, according to ESPN.

Kneeling during the national anthem, started by former 49ers player Colin Kaepernick, has become a way for athletes to protest against the treatment of Black people in the United States. "I am not going to stand up to show pride in a flag for a country that oppresses black people and people of color," Kaepernick told NFL Media in 2016. "To me, this is bigger than football and it would be selfish on my part to look the other way. There are bodies in the street and people getting paid leave and getting away with murder."

Unfortunately, it looks like not much has changed in four years, with baseball season opening on the heels of the deaths of George Floyd and Breonna Taylor and a worldwide push for police reform.

It is interesting that this form of protest has spread from one sport to another, especially since it is so hated by some of the most powerful people in the country, including the President and Vice President.

Looking forward to live sports, but any time I witness a player kneeling during the National Anthem, a sign of great disrespect for our Country and our Flag, the game is over for me!

In 2017, Vice President Mike Pence walked out of an NFL game between the Indianapolis Colts and the San Francisco 49ers because several 49ers players knelt during the national anthem. Pence later expressed his disappointment with the protest on Twitter:

I left today's Colts game because @POTUS and I will not dignify any event that disrespects our soldiers, our Flag, or our National Anthem.

I stand with @POTUS Trump, I stand with our soldiers, and I will always stand for our Flag and our National Anthem. pic.twitter.com/B0zP5M41MQ

Whether or not this protest comes from a sincere place or not, it definitely makes a statement to the sports-going audiences of the United States about what they should be paying attention to. I’m curious to see if kneeling in support of the Black Lives Matter movement will transfer to other leagues in the future.

Plus I just realized that BLM is just MLB backward, so that’s kinda cool.

Tags: sports , baseball , football , kneeling , BLM
Support Feminist Media!
During these troubling political times, independent feminist media is more vital than ever. If our bold, uncensored reporting on women’s issues is important to you, please consider making a donation of $5, $25, $50, or whatever you can afford, to protect and sustain BUST.com.
Thanks so much—we can’t spell BUST without U.