Washington's Football Team Is (FINALLY) Changing Its Name and Logo 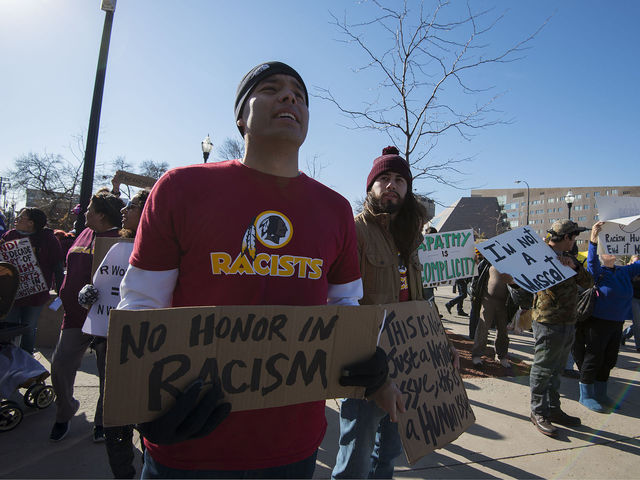 The NFL team for Washington, D.C., says it is retiring the controversial name and logo it has had for 87 years. The name is widely viewed as a slur against Native Americans because of its pejorative origins from colonial times.

"Today, we are announcing we will be retiring the Redskins name and logo upon completion of this review. That review has begun in earnest. As part of this process, we want to keep our sponsors, fans and community apprised of our thinking as we go forward." the team said in a statement Monday. The team has not disclosed what their plans for the new name and logo are.

After the killing of George Floyd and the subsequent nationwide outcry over racial and social injustices people of color have faced in the U.S., many pushed for organizations with racist names to address their history and change their names, including the Washington NFL team.

The owner of the team, Dan Snyder, had been fighting lobbying efforts by Native American activists and groups to change the team’s name. Snyder told USA Today in 2013 in response to the calls for a name change, "We'll never change the name. It's that simple. NEVER — you can use caps."

But the push gained momentum and by earlier this month, it was evident that keeping the name would harm their business. FedEx, the franchise's stadium sponsor, said it had "communicated to the team in Washington our request that they change the team name." Before this, many investment firms and shareholders asked FedEx, PepsiCo and Nike to confront the franchise about the use of the name and withhold business until it was changed.

This isn’t the only sports group in America that has a questionably racist name and logo. There’s also the Atlanta Braves, the Chicago Blackhawks, the Cleveland Indians, and the Kansas City Chiefs, which are already being called for a change as well.

While many want to claim that the names for the teams are out of “respect” and that the names aren’t that offensive, research shows that all Native American mascots, and the cosplay they inspire, are harmful.

A report commissioned by the Oneida Indian Nation titled "The Harmful Psychological Effects of the Washington Football Mascot” shows that when exposed to Native American mascots, Native American kids lose confidence in themselves and their communities achievements.

Michael A. Friedman, the psychologist who compiled the report said, “Native Americans are the only group in the United States subjected to having a racial slur as the mascot of a prominent professional sports team. [It] not only repeatedly exposes Native Americans to a harmful stereotype, but also implicitly condones the use of this term by non-Native Americans, which if performed on an interpersonal level would possibly constitute harassment or bullying.”

In response to the name change, the president of Navajo Nation, Jonathan Nez, took to Twitter and said "July 13, 2020 is now a historic day for all Indigenous peoples around the world. The NFL Washington-based team officially announced the retirement of the racist and disparaging 'Redskins' team name and logo. For generations, this team name and logo has misrepresented the true history and events that define the term 'redskins.'"

Nez and the Navajo Nation even suggested a new name for the team, The Washington Code Talkers. He said, "Renaming the team 'Code Talkers' to honor the Navajo Code Talkers, and other tribal nations who used their sacred language to help win World War II would set the team on a path to restoring its reputation and correcting the historical misrepresentation of Indigenous peoples."

To those who wonder why it's racist, I think you need to ask yourself: why are the most popular sports mascots first animals, and then indigenous people? Also, why there are so many sports teams around the world that use indigenous people as caricature mascots and use indigenous slurs as their team names?

While there are other groups of people that are team names and mascots like the Boston Celtics, New York Yankees, Notre Dame Fighting Irish, and Minnesota Vikings, they are selected by the people within the same ethnic group as a celebration of their history and they are definitely not at the scale or severity of the numerous sports teams misrepresenting indigenous peoples. They don’t use racial slurs as their name.

If you want to learn more about changing the names, watch this video from the National Congress of American Indians: