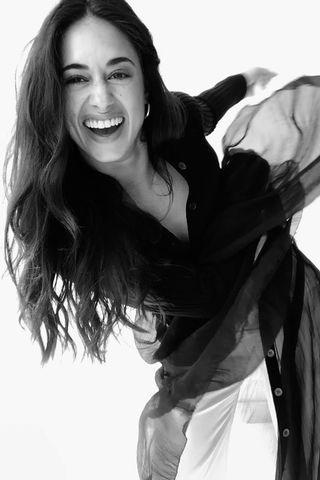 If you’re a sci-fi fan, you’ve probably heard of the book series and ’90s show Roswell. After being rebooted on The CW in 2019, it soon became one of those shows that leaves you thinking. Like most science fiction shows, it discusses social and political issues of the time through meaningful metaphors. With the success of the reboot, Roswell, New Mexico was praised by fans everywhere for its powerful take on immigrant’s rights through the lens of aliens and the supernatural. With season 2 underway, lead actress Jeanine Mason, who has also stared in Grey’s Anatomy and Bunheads, has been busy working on home improvements and reflecting on her first leading role in a tv show.

Jeanine’s character, Liz Ortecho, is a Mexican-American biomedical engineer. She is a caring, fierce and incredibly curious woman. It seems that Mason has a lot in common with her amazing character on Roswell, “I'm also first-generation Latina. I'm Cuban-American. I have such a love of knowledge and I, too am insatiably curious, I think it's why I'm an actor. I think I have that mama bear protective thing and I love being a sister. I have three siblings and it's one of my favorite bits of my makeup that I'm a sister and I know it is for Liz, too.”

One of the integral parts of Roswell’s story is the relationship and heartbreak between Liz and Rosa, who mysterious died before the start of the show, and how that changes with the new season.

“I have two sisters and I have a brother, and it's amazing to me to see how each one is so unique. The thing that I think is always true is that your shoulders can just relax a little bit more, at least about an inch lower when you're with someone that there's no point in hiding things from because they just know you intimately. And, that's something that was so fun to try to tap into with Amber Midthunder [Rosa]. I adore that woman and so figuring out a way for them to just feel like they could be unapologetically messy and open. [They can] bleed themselves a bit where it's like they can [be outside] the box and just sort of bleed out. It was so fun. So fun.” Mason said.

While Liz has her own journey, she also has a fan-favorite alien boyfriend Max. The show starts with Max resurrecting her with his healing powers and he becomes the savoir of the show, but with the premiere of season 2 on March 16, Liz’s hero journey begins.

While Max’s journey is more immediate, Liz’s takes time as her character changes, “For Liz, it's a much more laborious process and it takes her a long time but she gets there and it is literally incredible. It is an incredible achievement. So, I hope people see that and understand that, what this woman has been able to accomplish and what a genius she is and get excited about what that means to her development and her moving forward and where that intersects with her deep desire to help people.” Mason said. She believes that Liz’s character has a lot in common with the many brave medical professionals helping with COVID-19 today.

She also pointed out the importance of exploring the issue of immigrant rights and other social issues with the sci-fi genre.

“I think it's what's so powerful about the genre that we are choosing to have this conversation in, which is sci-fi and it's a reason I've always had such a high respect for [that genre]. So much of the history of sci-fi culture is that it is one in which very creative people are imparting great truths. And we are trying to do that as part of our legacy in this genre.” Mason said, “The metaphor is aliens and it plays out on so many different levels on our show. ‘Do you belong and who has the right to tell you that you belong?’” 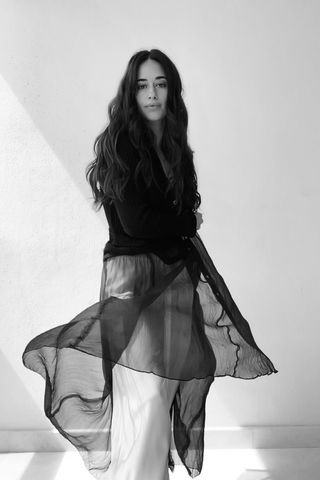 Before Roswell, Mason had a guest star role on Grey’s Anatomy’s fourteenth season as Sam Bello, a surgical intern and DACA recipient who shares a lot with the Roswell character. Mason feels like Liz Ortecho’s character is a continuation of her role in Grey’s Anatomy. Mason said about when she was considering the role, “And so I thought, well this would be the dream job and for it to happen, for it to be mine, for me to get to like put my hands and mold [Liz Ortecho] into what I feel is best for her and what I feel we need now more than ever, is a dream.”

Being one of the few shows on televisions that discusses undocumented and mixed status families, Roswell, New Mexico emphasizes how undocumented immigrants make incredible contributions to our communities and society.

Much like the show, Mason advocates for immigrant rights and has worked with Define American, an advocacy group dedicated to changing the way immigrants and undocumented people are viewed in America, on Roswell and Grey’s Anatomy. She is also going to be the keynote speaker for their program #immagrad that supports young immigrants who just graduated college. Mason is very passionate about these issues.

“It just excited me because I'm very aware of how isolating it can feel, given the images and the language that's used, that for whatever reason gets prominence on media sometimes, unfair prominence. It doesn't do anything to make you feel like your future is right and like you were wanted here and you're supported here. And so that whole campaign is about reminding them that that is not the predominant voice. You know, the dominant voice out there is one of, ‘You're going to do incredible things and we are lucky to have you and the legacy of immigrants is one of pioneers. Is one of work, you know, immigrants who get the job done.’” Mason said.

For the future of Roswell, Mason hopes to explore Liz mentoring a younger person who is also dealing with a mixed status family and the complications that may arise. She also hopes the show can shine a light on the Afro-Latinx community, “We're trying to bring in more Afro-Latinx characters. You know, there's a real Eurocentric beauty standard to Latin characters on television. We don't get to see a lot of Afro-Latinos and Latinas and their truth. It's such a rich culture. And being Cuban, that's such a big part of our culture. So, I'm hoping to bring that into our show more.”

For herself as an actress, Mason hopes to explore more comedy roles like her upcoming appearance in the final season of Grace and Frankie. She said about what else she would like to explore as an actress, “I have a list of people I would just love to work for and love to go to battle with. I want to do so much more film. I really want to work with Guillermo del Toro and I love his brand of magic and I just would love to help him do something magical. I'm like, ‘What do you need, I'll be there!’”

After talking to her, it’s clear that Jeanine Mason is a lot like Liz; lovely, smart, incredibly kind, and also crazy smart. One thing’s for sure, Mason has put her heart and soul into this role to the point where it’s hard to see where Liz ends and Jeanine begins, and that’s a good thing.

Tags: Jeanine Mason , Amber Midthunder , Roswell , New Mexico , Grey's Anatomy , Grace and Frankie , Define American , immagrad
Support Feminist Media!
During these troubling political times, independent feminist media is more vital than ever. If our bold, uncensored reporting on women’s issues is important to you, please consider making a donation of $5, $25, $50, or whatever you can afford, to protect and sustain BUST.com.
Thanks so much—we can’t spell BUST without U.