Details
BY Emma Davey
IN Entertainment
Published: 13 May 2020 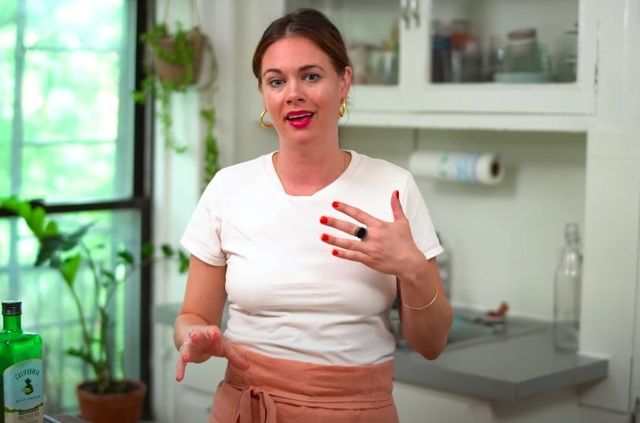 I own precisely four cookbooks — both of Chrissy Teigen’s and both of Alison Roman’s. They have guided me through becoming a young adult and learning to cook for my loved ones, whether it’s making Teigen's Cool Ranch Dorito salad for a friend’s birthday party or impressing my boyfriend with Roman's caramelized shallot pasta. I do not suspect this is a unique experience. Both women are young, pretty, and funny, and their recipes are flavorful and easy to follow. I exist firmly in the Venn diagram of their demographics, although my background might square away more with Roman’s kind of crowd: millennial women with overpriced liberal arts degrees who have moved to A Big City and own multiple products from Glossier.

Unfortunately, this means I took news of their falling out much harder than I should. In a recent interview, Roman told The New Consumer: “Like, what Chrissy Teigen has done is so crazy to me. She had a successful cookbook. And then it was like: Boom, line at Target. Boom, now she has an Instagram page that has over a million followers where it’s just, like, people running a content farm for her. That horrifies me and it’s not something that I ever want to do.” She also called Marie Kondo a sellout: “Like the idea that when Marie Kondo decided to capitalize on her fame and make stuff that you can buy, that is completely antithetical to everything she’s ever taught you… I’m like, damn, bitch, you fucking just sold out immediately!” She also, in my humble opinion, broke the cardinal rule about using the word “bitch,” which is that you can only use it affectionately towards your close friends. You can’t lob a “bitch” at a woman you don’t know and have it not be malicious. You can only call an unknown woman a “bitch” if you think she really deserves it.

Teigen expressed how hurt she was by Roman's comments on Twitter, and the fall of the Roman empire began. Obviously, Chrissy Teigen is an incredibly wealthy woman who, like other "girl bosses," shouldn’t be immune to criticism. Many supporters touted the bland aphorism “Women should support other women!” as a rallying cry, a phrase that has now been used so often to justify women’s shitty behavior under the guise of “feminism” or “women’s empowerment.” But what exactly was there to criticize here? If Roman was attempting to examine the capitalist underpinnings of creating a lifestyle brand, it didn’t land as such. It mostly came across as mean-spirited. Teigen’s longtime love of food is well-documented. She’s not some Gwyneth Paltrow-esque snake oil salesman, waltzing onto social media pretending she knows more than she does about food or amassing wealth through scamming us with Yoni eggs. Both she and Roman are 34-year-old social media stars without a formal education in cooking who each have capitalized (in different ways) on a talent they’ve accrued along the way (to her credit, Roman actually did train in the restaurant industry, but just because Teigen didn’t, it doesn’t mean she’s unqualified). Plus, Roman’s beef with Kondo seems especially odd considering Kondo is promoting organizational tools and products. That’s her brand. That’s who she is. If Kondo was suddenly pedaling some sort of room-sized dump truck designed to toss garbage around your apartment, okay, she’s a sellout. But that’s not what she’s doing.

I watch 99% of Chrissy Teigen’s Instagram stories. She loves Italy, she has a line of cosmetics and sunglasses, she lives in an opulent mansion. But mostly her stories feature 1) her kids 2) cooking 3) cooking with her kids. Is it curated? Are there brand collaborations? Yes. But not in a way that’s vastly different than anyone else with a lifestyle brand, and in fact, it’s nearly imperceptible. This woman just wants to cuddle with her kids and her dogs and make Thai food with her mom. Her brand is fairly innocuous (unless you’re Trump). She and her husband have used their wealth in tangible ways to support progressive causes. Her recipes feature easy to obtain ingredients, and she has a line of cookware at Target.

Alison Roman doesn’t have to want that; she isn’t required to subject herself to one of capitalism’s many mechanisms (turning your brand of personality into a literal brand to sell people products) more than is necessary. Except that’s not the whole truth. She's collaborated with brands like Kerrygold, Bumble, and J.Crew (what do the latter two have to do with food, I ask?) And in the very article, she talks about her cookware collaboration with cooking startup Material, which doesn’t seem much different than Chrissy’s Cravings line, save for the fact that Target doesn't have the same kind of cultural cache as a smaller brand. It insinuates that products are acceptable for those with good taste and the money to shell out for them. The poor rubes shopping at Target don’t get that luxury. Furthermore, for the better part of history, those who we consider to be goddesses of domesticity — Martha, Julia, Ina — are white women. When Roman questions the authenticity of Chrissy Teigen and Marie Kondo, it seems like she has a weird bone to pick with Asian women who have achieved success without having to submit to traditional gatekeepers.

I don’t want to cancel Alison Roman. I am disappointed in her. I’ve lost some respect for her. I want her to do better. But I’m not going to burn my copy of Nothing Fancy because of it. Your favorite will ultimately disappoint you: maybe not majorly so, and maybe it won’t happen today or tomorrow. But it’s coming. Maybe it’ll be when you find out that Hannibal Buress is a landlord. Maybe you’ll check out Pete Buttigieg’s donor records and see Mandy Moore and Jennifer Aniston on that list. And I’d also like to clarify that when I say “your fave will disappoint you,” I mean this in an entirely different way than “your fave is a literal rapist, and you should immediately stop respecting that person.”

In a way, I was waiting for this moment to happen, as it always does with anyone we deem a Cool Girl. On BuzzFeed, Anne Helen Petersen has written a lot about this phenomenon, especially as it concerns Jennifer Lawrence. Lawrence was a chick who could hang, potty-mouthed but still beautiful, not afraid to swig alcohol on live TV, but not a complete hot mess. And then, all of a sudden, she wasn’t cool anymore. It’s the likability trap, of having your once beloved personality now being wielded against you. In an interview with The Cut long before this, in 2016, Chrissy Teigen herself elaborated on it: “What ends up happening to the cool girl is that there’s this backlash, like they’re trying too hard…[t]here ends up being this crazy backlash against them because they’re 'too cool.' It seems to be a thing that only happens with women and it’s so weird to me. It’s nice to be cool girl. But it’s scary, because you’re waiting for that moment when people turn. It’s so weird.”

Roman had become so ubiquitous during the COVID-19 quarantine. She popped in and out of livestreams, was the subject of numerous thinkpieces, and carved a niche for herself with her brand of easygoing entertaining. Once you reach the point of oversaturation, it’s hard to get the public on your side again. It happened with Anne Hathaway. It has even already started to happen to Alexandria Ocasio-Cortez. Of course, those who usually exist in the Cool Girl Firmament are those who have achieved that status and had that status insulated by their white womanhood. Roman, is no exception and she used her white womanhood to attempt to buffer herself from criticism (her apology largely read as “Sorry that you were hurt by what I said, hope one day we can be friends!”).

Chrissy Teigen was justifiably upset over what Roman had said. Twitter was justifiably upset by what Alison Roman had said. But the backlash seemed a little too maniacally gleeful, with a few too many people claiming they’ve been hating Alison Roman all along (where have you been this whole time?) or even asserting that her recipes are gross. Here’s the thing: she knows how to cook. Her food is not underseasoned. #TheStew are #TheDip are delicious, sorry to burst your bubble. What’s even more frustrating is that Chrissy Teigen herself has been implicated by the Cool Girl Trap in this very incident, tweeting, “I really hate what this drama has caused this week. Calling my kids Petri dish babies or making up flight manifests with my name on them to “Epstein island”, to justify someone else’s disdain with me seems gross to me so I’m gonna take a little break...This is what always happens. The first day, a ton of support, then the next, 1 million reasons as to why you deserved this. It never fails.”

Chrissy Teigen Offers To Pay McKayla Maroney's NDA Fine, Gives Us Another Reason To Love Her