Details
BY Aliza Pelto
IN Entertainment
Published: 06 May 2020 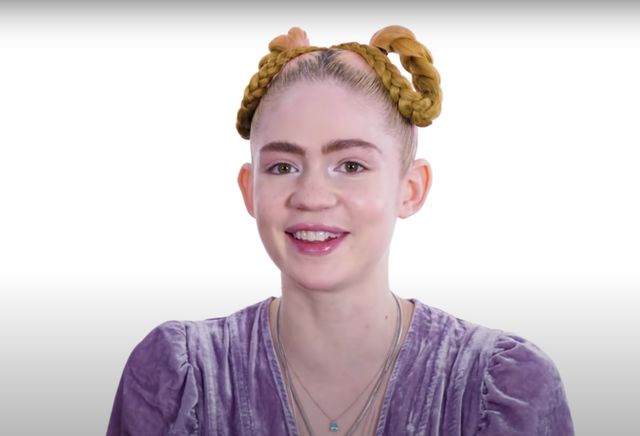 On Monday, indie electropop singer Grimes and Tesla and SpaceX CEO Elon Musk announced the birth of their baby. The couple, who reportedly began dating around May 2018, announced that they were expecting their first child together back in February of this year.

When the birth announcement came, all Musk tweeted was “Mom & baby all good,” along with a picture of him and the baby together. While Musk tweeted that the baby’s gender at birth is male, the couple had announced back in February that they would be taking a gender-neutral approach to parenting. “I don’t want to gender them in case that’s not how they feel in their life,” Grimes said on the topic during a YouTube Livestream.

Shortly after the news, folks on Twitter began to anxiously await a reveal of the child's name. But when Musk finally gave the Internet the big announcement a few hours later, people didn’t quite know what to do with themselves.

Grimes and Musk are both eccentric to say the least, so it was no surprise that the baby’s name would be a little bit out of the ordinary. Nobody saw it coming, however, that the child would be named X Æ A-12 Musk. In fact, many couldn't even tell if it was a joke or not, as the two are also known for having a pretty good sense of humor. But, as Grimes went on to explain the unique name’s origin, folks began to accept that this was, in fact, the real deal.

•X, the unknown variable ⚔️
•Æ, my elven spelling of Ai (love &/or Artificial intelligence)
•A-12 = precursor to SR-17 (our favorite aircraft). No weapons, no defenses, just speed. Great in battle, but non-violent ?
+
(A=Archangel, my favorite song)
(⚔️? metal rat)

There is a lot to unpack here. First thing’s first, the baby looks totally happy and healthy. With that being all that truly matters, who are we to judge Grimes and Musk’s choice to name the baby X Æ A-12? Still, there are a few things that simply need to be addressed. Is X Æ A-12 the official name on the baby’s birth certificate? How is X Æ A-12 pronounced? Is the baby’s name X Æ A-12 because they liked the way it sounded, or are they actually named that because they are not of this earth at all? We need answers.

Some folks have tried their hand at figuring out how the pronounce the child’s name themselves:

Others have responded to Grimes and Musk’s explanations of the name, begging them for more information:

Thanks this didn’t help at all

All in all, as if there were any other appropriate reaction to a situation like this, some pretty stellar memes about Musk, Grimes and X Æ A-12 have begun to circulate:

X Æ A-12 after being born be like: pic.twitter.com/xYW7XuQAYJ

X Æ A-12 introducing himself to the midwife pic.twitter.com/x2hiGTlD8U

Them: Please fill in a Captcha to prove you're not a robot
X Æ A 12:#XAEA12 pic.twitter.com/RzUlNbvq6s

X Æ A-12 first day at pre-school be like: pic.twitter.com/fEwBJYbs3R

X Æ A-12 when grimes and elon exit the room pic.twitter.com/RDKbN8PqCE

Grimes and Musk are playing along with all the Twitter users reeling over this baby’s name, asking many of the same questions we are. The two are definitely being good sports about it. Hopefully, they’ll go ahead and release an official pronunciation guide for us foolish earthlings soon.

Tags: Grimes , Elon Musk , SpaceX , Tesla , Baby , Baby Names , Pregnancy , X Æ A-12 Musk , X Æ A-12
Support Feminist Media!
During these troubling political times, independent feminist media is more vital than ever. If our bold, uncensored reporting on women’s issues is important to you, please consider making a donation of $5, $25, $50, or whatever you can afford, to protect and sustain BUST.com.
Thanks so much—we can’t spell BUST without U.