The "Gossip Girl" Meme Offers Some Joy During Dark Times 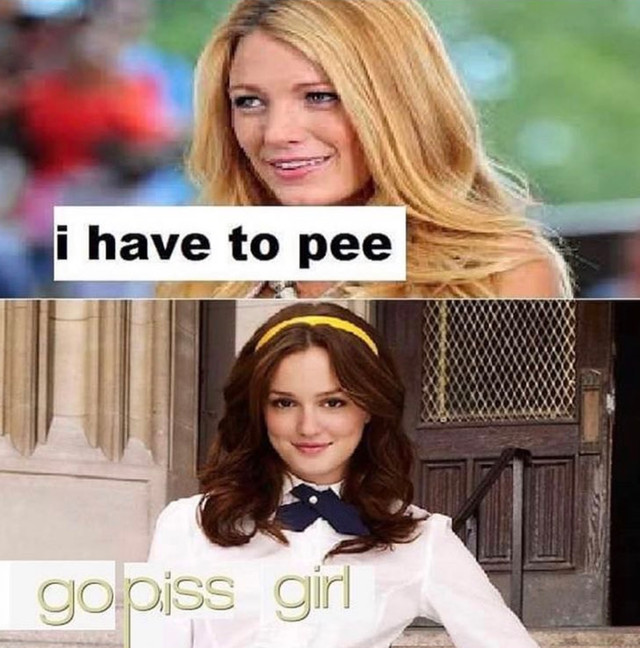 Every so often, a meme comes around that completely defines a period in time. For the mid-late 2000s, it was a grumpy cat. Last year? The Distracted Boyfriend meme. For some reason, Pepe The Frog was the talk of the town for a while. The list of the best memes of all time could go on for a while, but right now, we are seeing a renaissance in meme culture. Whether it’s simply because we’re all stuck inside spending even more time on our phones than we’re used to, or because comedy is the best distraction in times as harrowing as these, the Internet has really stepped up its game as of late. One meme, however, stands out among the rest. Within the last week it has somehow managed to turn both Twitter and Instagram upside down. Everyone is talking about it: the Gossip Girl meme.

Like most memes, nobody quite knows how or why this image began to circulate. What’s even more of a mystery is why it became so incredibly popular. It’s hard to tell exactly how it started. The first rendition I saw being widely re-posted and reproduced online featured a two-panel image of Serena Van Der Woodsen and Blair Waldorf, the leading ladies of the hit teen television drama. In the image, Serena simply states, “I have to pee,” to which Blair responds, “Go Piss Girl.” Out of context, this is not funny. But when you see the phrase “go piss girl,” somehow rearranged from the letters that make up “Gossip Girl,” it somehow becomes instantly hilarious. In fact, I firmly believe it is exactly the kind of comedy we need in our lives right now. The Gossip Girl meme, as dumb as it is, might just save our sanity as a society.

This is testing what little sanity I have left pic.twitter.com/Sn6DzNKQuA

Apparently, the rest of the Internet agreed with me. Shortly after the original meme began to circulate, hundreds of new renditions started to surface online. Now, you cannot log into Twitter without seeing dozens of Blairs and Serenas littering your feed. So, without further ado, here are some of the most creative recreations of the meme that have come out of this terrific, albeit ridiculous, trend:

1. This one, which perfectly encapsulates my state of mind 95 percent of the time

2. This showcase of what Blair and Serena are up to while in quarantine

i have genuinely lost my mind at this stage pic.twitter.com/zLPZmDb2Ce

5. The most creative critique of how our government is handling the pandemic

6. This gem that is sure to bring you back to your indie electro-pop days

7. This one that decided to completely abandon the meme’s format just to state our collective mood

8. One for the Disney fans out there, ft. a fave Disney feminist icon

I thought my heart had learned its lesson
It feels so good when you start out pic.twitter.com/eI5KKW1fOZ

9. Live footage of Presidential Candidate Joe Biden when someone asked him who is VP might be

10. This one that feels like it took zero effort and so much thought and consideration at the same time

me and my friends after we smoke pic.twitter.com/3pyQaFGw0X

11. What will be remembered in history books as the constant mood of 2020

did i do this right pic.twitter.com/NW6W5RkijE

13. One for all you Marina and the Diamonds fans

I did a thing pic.twitter.com/sMhd9MGiae

this is my contribution pic.twitter.com/eGMqJ7sAds

16. This legendary call to action

17. One for all RuPaul’s Drag Race fans out there

18. Perhaps the only inderation that actually calls back to Gossip Girl

this is the plot of all 6 seasons of gossip girl pic.twitter.com/kdsZ3rZEjs

19. This creation that perfectly utilizes the "is she...you know...?" meme

this is the only contribution i will be making to these gossip girl memes pic.twitter.com/6MfRe6YZu7

my contribution to the gossip girl meme pic.twitter.com/6eHwBIK0tc

21. This one spitting the straight up laws of nature

22. A brief synopsis of Harry Potter and the Chamber of Secrets

harry potter and the chamber of secrets (2002) #GossipGirl pic.twitter.com/yoXwvHHZuv

23. Another one that completely abandoned the meme’s format, but still somehow works beautifully

24. I don’t even know what happened with this one, but it feels right

25. This roast of the Kent State gun girl

I made one.
xoxo #gossipgirl pic.twitter.com/rGJRl44GCA

26. This one that is so oddly specific but somehow feels universally understood at the same time (#EndPlantationWeddings2k20)

29. The one that perfectly answers the question as the how this meme unraveled in the way that it did

I love how memes start off with simple iterations and stumble into dadaism within 72 hours https://t.co/wRjObGkD9E

30. And last but not least, the one that proves we are, in fact, entering a renaissance. I said what I said.