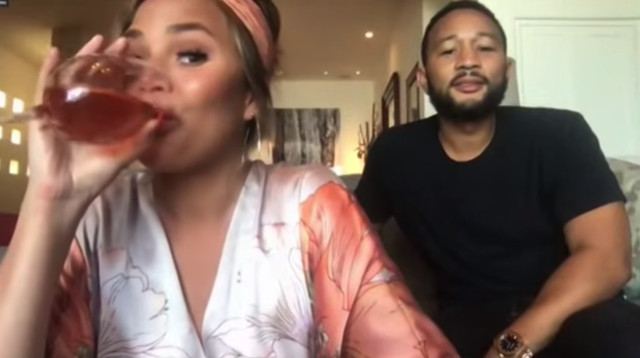 Twitter is a hellscape as of late. Between the non-stop coronavirus coverage and the President tweeting god knows what, I am at my wits end. I am losing my marbles, if you will. Following meme accounts will only get you so far. And frankly, with everything that’s going on, there has to be some happy medium between staying informed and having a distraction from all the craziness of the world. Luckily, there are a few feminists on Twitter who have found the balance of being hilariously distracting and stay updated on the latest news.

Chriss Teigen might just be the queen of Twitter. Since we all began self-isolation, she has only stepped up her tweeting game. These days, her posts mainly have to do with two topics: cooking and animal crossing. What more could you want on your feed? From her 24-hour bolongnese, to donuts and of course, her famous banana bread, Chrissy has you covered with all the food-inspo you need for self isolation.

On top of providing that wholesome content and just all around being an icon, Chrissy has mastered the art of keeping her followers updated on what’s going on in the world, but putting a comedic spin on things.

I am very dumb and I knew this https://t.co/tZglcjdzqU

should I bleach my hair

Nobody hates Mr. Trump more than comedy queen Bette Midler. I’m not even sure if that’s an over-statement. If you still want to stay updated on the latest news, but would prefer not to get constant updates from news outlets or have to gag at the sight of the President's tweets, Bette has you covered. She's basically a surrogate news outlets AND posts both wholesome and hilarious  content

I made it myself. pic.twitter.com/2bSsBW0ogs

I’ve gotten really into vacuuming. Every day. Sometimes twice. I wondered what caused this new obsession & realized it’s because the vacuum follows me like a little dog. I’ve named him “Sucky".

#BorisJohnson is in intensive care. "Conscious at this time" says a spokesperson. Oh dear.

Comedian and writer Ashley Nicole Black is another feminist to follow on Twitter for when you want to know all the latest political tea, but don’t want it presented to you in a way that will make you want to crawl into a hole and never come out again. From her own posts to stories she retweets from others, you’ll get to stay updated on things like presidential primaries and other bits of national news AND get to see positive stories that will make your day just a little bit brighter.

The primary is over. We get to mourn all the possibilities we lost. Then we start working to win the general. But then after that probably we write a bunch of tv shows of fictional worlds with presidents who aren’t white men. pic.twitter.com/gcmgRYcPKu

Not to mention, her tweets since entering this period of self-isolation have been BIG moods

Me: Damn, this is a really long trailer.
Netflix: Bitch, you’re watching the episode. Surprise.

And, once again, she’s basically just tweeting what we’re all thinking

Did the celebrities quarantine with photographers, or have they made their children take photography classes? Who is taking these well framed, well lit photos?

Following Charlotte Clymer on Twitter is like watching the news but not having to worry that someone from FOX is gonna pop up, say something dumb, and ruin your day. From the stories she retweets to her own political commentary, Clymer is up to date on everything going on election wise here in the states. She’s also a queen of tweeting and retweeting the feel-good stories and comedic posts that we all need in our lives right now.

Bernie Sanders is putting country before ambition. He’s about to unite the party and help unite the country. It’s a selfless act in the face of a White House defined by selfishness. It’s prioritizing our most vulnerable citizens above all else. Let’s follow his example.

I look over at Table 5, where @billyeichner is shouting: "WHAT IS THE HAGGADAH, FOR A DOLLAR?!" https://t.co/E9RmaLiXQt

You guessed it. Clymer too is basically just tweeting what we’re all thinking.

Not gonna lie: I'm still disturbed a lot of folks didn't know how to properly wash their hands before this.

Last but not least, this Twitter comedian who will have you laughing out loud every time you log on. First of all, this was the first tweet I was met with when I opened Twitter after finding out about Bernie dropping out of the election, so if that doesn’t prove she’s one to follow, I don’t know what will.

Second of all, Mary Beth came to serve with self-isolation and coronavirus-themed tweets. Truly, the most relatable content I have seen.

my dad: do you want to help me empty the dishwasher