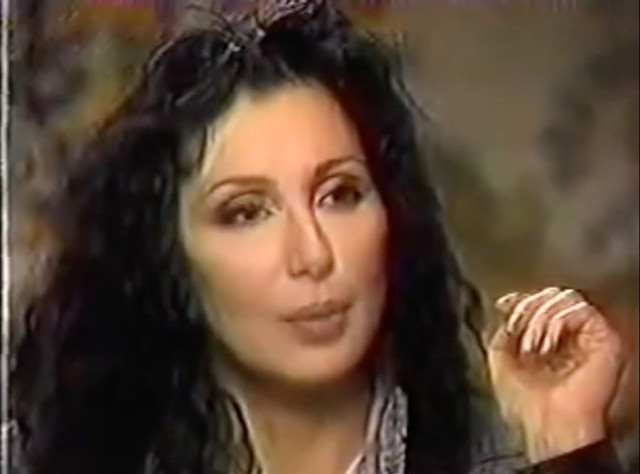 Sexism has and continues to run rampant in the music, sports and movie industries. Unfortunately, this means a lot of women celebrities are subject to inappropriate and offensive comments whether they’re on a radio show, walking down the red carpet or in interviews. Fortunately, the women of Hollywood are also not taking anyone’s shit. There’s nothing better than watching your favorite feminist celeb roast a douchy presenter on live television. So, being that it is Women’s History Month, we thought it was only fair to make a list of just a few of our favorite times some bad-ass women celebrities smashed the patriarchy in interviews.

1. The time Cher reminded us that men are like dessert

This moment should quite literally be in history books. In 1996, an interviewer posed a question citing Cher’s own words: “A man is not a necessity, a man is a luxury,” to which Cher obviously replied, “Like dessert, yeah. A man is absolutely not a necessity.” When the interview appeared to try to turn Cher’s words against, however, asking if by saying that she meant it to be mean and bitter (an all-too-common trope used against feminists) the singer gave the best answer possible: “No, not at all. I adore dessert, I love men. I think men are the coolest. But you don’t really need them to live.” And finally, Cher uttered the single most incredible feminist anecdote of all time, “My mom said to me ‘You know sweetheart, one day you should settle down and marry a rich man.’ I said, ‘Mom, I am a rich man.’”

2. Eartha Kitt’s iconic response to being asked if she would compromise for a man

Actor, activist, singer and comedy queen Ertha Kitt had one of the best and most empowering responses to a sexist interview question back in 1982. Sipping on tea in a garden, Kitt was asked if she would consider compromising her life if a man were to come into the picture. With a cold, hard stare, the entertainer simply asked “For what?” Now, I want this next part to be blasted through speakers whenever I need a pick-me-up. Before letting out one of her renowned Ertha Kitt laughs she stated, “A man comes into my life and I have to compromise? You must think about that one again.” She even repeated the phrase a few times as if she herself could barely process what was going on because of how ludacris the interviewer’s statement was. What was more, however, was the speech the star went into after the incredible comeback. “A relationship is a relationship that has to be earned, not compromised for,” she said. “I fall in love with myself. And I want someone to share it with me. I want someone to share me with me.” Let's hear it for self love!

3. When Lady Gaga asked the interviewer if he was scared

Back at the start of her career, Lady Gaga sat in an interview in which a journalist asked her if she was scared the sexual references in her music videos would undermine the music itself. The purple haired Gaga sat calmly in her chair and simply replied, “I’m not scared, are you scared?” The shade! She proceeded to school the interviewer on how inappropriate the question was, arguring that if she were a man sitting in front of him, talking about drugs and fast cars and having sex with women, they would call him a rockstar. But when she is sex positive, because she is a woman in pop, she gets critizied. “I am a rock star,” Gaga stated proudly. After the presenter asked yet another dumb question, Gaga answered by saying she makes music for the gay community because she loves them so much. “Why?” the presenter asked. “Because they don’t ask me questions like that,” the queen of Little monsters said. “Because they love sexual, strong women who speak their mind.”

Just about every woman alive can relate to being told to smile by a random old dude out in public. It happens to celebs, too. And sometimes, it gets caught on live TV. When Olympic champion Simone Biles was on Dancing With The Stars back in 2017, she was asked the age old question and her response became an instant classic. After performing a number and heading over to the judges table, host Tom Bergeron asked why she wasn’t smiling, she responded with a smirk: “Smiling doesn’t win you gold medals.” With this simple statement, Biles set a great example for young girls who look up to her.

Everytime I watch this video, I cringe. But I also can’t stop watching it because of how bad-ass Ariana Grande’s clapback was to these two ignorant radio hosts. Seriously, these dudes could not get it together when Grande appeared on their Power 106 show a few years back. It all started when Grande mentioned how much she loved the then-new unicorn emoji. “Girls,” one of the hosts scoffed. You could immediately tell from the pop singer’s expression that it was going to be a long show. “Yeah, boys. Boys use the unicorn,” she noted. The DJs went on to waste a perfectly good moment to ask Grande about her new single by inquiring about what she would choose if she had to pick between makeup and her phone. “Is this what you think girls have trouble choosing between?” she said. Instead of taking the cue that their questions were growing increasingly annoying and inappropriate, one of the DJs went onto argue that all women know how to do is use their phones. When Grande argued that she can go extended periods of time without using her phone, and actually prefers to live in the present moment, one of the DJs tried to be cute by shouting “Ladies, listen and learn!” But Grande shut that down real quick, “Boys learn. Boys and girls, we can all learn.”

Red carpets are often a place where women in Hollywood encounter a subtle mix of sexism and shade. At this event, Cate Blanchett figured it was high time to call some of that sexist shit out. While being interviwed by E! the camerman began to slowly pan down the actresses's body while she was talking. Before he had time to get too far, she knelt down, pointed at him and asked the hard-hitting quesiton, "I'm just wondering, do you do that to the guys too?" While both the cameraman and the interviwer fumbled, she cracked the joke: "What do you think is gonna happen down there that is so facinating?" Next time someone has the honor of having Galadriel right in front of them, they'll have the sense to let her talk about her work before giving her an up-and-down.

7. The time Helen Miran was not taking this patriarch’s shit

What Dame Helen Miran had to sit through in this sexist interview is so absurd you won't know whether to laugh or gag. Back when she was performing as Lady Macbeth in 1975, Michael Parkinson, a notoriously sexist TV personality, thought it would be a fine idea to ask the actress if her "physical atributes" may be distracting to the audience. Her boobs. He was talking about her boobs, as he clearly tried to note with the nastiest glance I have ever seen before mockingly referring to the renowned star as a "serious actress." Miran, however, was not going to let this blatant misogyny go on any longer. “Because serious actresses can’t have big bosoms is that what you mean?" she said.  "What a crummy performance if people are obsessed with the size of your bosom ... I would hope that the performance, and the play, and the living relationship between all the people on the stage and all the people in the audience overcome such boring questions.” She later summed up the experience for what it was, by calling Parkinson a "sexist old fart."

8. Rihanna’s iconic eye roll after she got asked this question

At this Macy's event that celebrated the release of Rihanna's perfume collection, Bad Girl Rih was 100% done with a questions women in the world of entertainment get asked too often. It's always phrased in a different way, "Who are you seeing," "Is there a man in the picture," and so on and so forth. This time around, rather than using her 30 seconds with pop star to ask a questoin about say, her perfume or her music, the interviewer chose to ask "What are you looking for in a man?" Before answering, Rih gave an eyeroll that could quite literally take down the patriarchy in one foul swoop. "I'm not looking for a man," she stated, "let's start there."

9. When Scarlet Johansson shut down this creep of a interviewer

And finally, the creepy interviewer to end all creepy interviwers. Seriously, this dude made me want to start up a Change.org petition to ban all male boomer entertainment journalists. If you had the opportunity to ask a woman star of a super hero franchise anything in the world, the absolute last thing that should come to mind is what she's wearing under her constume. But apparently, this guy didn't think that. While he attempted to ask his question about her undergarments, Johansson interrupted stating, "You're like the 5th person who's asked me that. What is going on?" The flustered questioner quickly tried to backtrack, while Jeremy Renner looked on in horror and awe. After a back and forth in which Johansson joked about wearing dungerees under her suit, she ultimately shut things down by stating, "what kind of interview is this?" The actress held it together far better than I would have, but you can be sure this guy never attempted to ask a question like that to a professional Hollywood actor again.

Tags: Sexist , Sexism , Hollywood , Cher , Eartha Kitt , Rihanna , Lady Gaga , Ariana Grande , Cate Blanchett , Scarlett Johansson , Helen Miran , Simone Biles
Support Feminist Media!
During these troubling political times, independent feminist media is more vital than ever. If our bold, uncensored reporting on women’s issues is important to you, please consider making a donation of $5, $25, $50, or whatever you can afford, to protect and sustain BUST.com.
Thanks so much—we can’t spell BUST without U.