Taylor Tomlinson Talks Her New Netflix Special—And The Journey Leading Up To It: BUST Interview 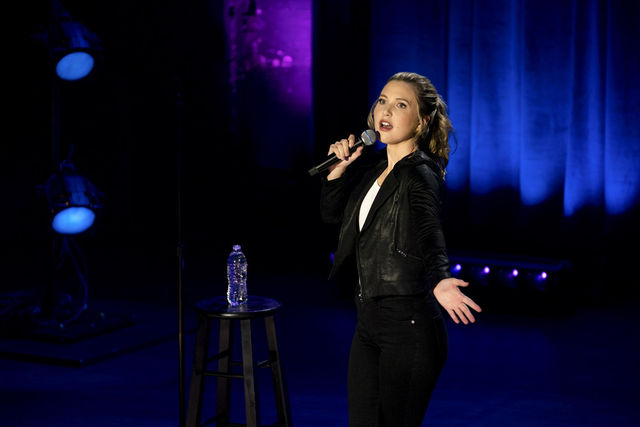 At just 26 years old, Taylor Tomlinson is making a name for herself in the world of comedy. Just five years ago she ranked in the top ten on NBC’s Last Comic Standing and she has continued making the rounds, appearing on numerous late-night shows such as Conan and The Tonight Show with Jimmy Fallon. Now with a debut special on Netflix, titled Taylor Tomlinson: Quarter-Life Crisis, Tomlinson’s trajectory is reaching new heights.

Tomlinson spoke with BUST via phone to discuss her ideal day off, and what it’s like to be a young comedian, and her experiences going from doing stand-up with her father in church basements to having her own featured special on one of the world's largest streaming services.

How did you get started in comedy in general? What was your first gig?

When I was sixteen, my dad wanted to take a stand-up comedy class together. So we did that and he went back to making money in a real job and I decided to become a comedian and drop out of college — so, you know, very weird story. I definitely fell into it.

What was the process like for getting your special? How did you prepare for it?

We submitted an hour to Netflix like a year ago. It was a video; we got a tape of the hour I was doing on stage which was probably, you know, 75% of what ended up in the special. Hoping they’d give me half an hour, to my surprise, they let me talk for a whole hour, which I’m extremely grateful for.

What was it like taking classes with your dad? Do you think your comedy styling is similar to his, or do you all have very different tastes when it comes to comedy?

I think we definitely have different tastes but your parents definitely influence your sense of humor, I think genetically. I probably got a lot of timing and whatnot from him. But he’s certainly not doing stand-up anymore and the type of comedy I do now probably wouldn’t be his taste but, you know, he thinks it’s cool.

I always wondered with comedians: how do people in your life react when they find themselves worked into your material? For instance, the special includes mentions of ex-boyfriends and still staying in touch with their moms. Your parents are part of the material, too. Is it awkward for them or does it just depend on the person?

Yeah, it depends on the person really. If you’re my ex-boyfriend I’m not running my jokes by you, usually, because you’re my ex-boyfriend — and if you’re my current boyfriend, I probably am running jokes by you. My family, I’ll run jokes by. Sometimes I do so, and if they say they don’t like it, I will stop doing it. But then sometimes if I run it past them, it’s moreso just a courtesy of, like, “This is what’s happening. Hope that’s cool but if not, it is an experience from my childhood that you have to be a part of.” But if I’m doing a joke about something somebody told me about themselves, that I think you need permission for, for sure.

Over the last ten years or so your career has been pretty successful and gone down a really great path. What advice would you have for other people hoping to breakout in their respective fields?

Just write as much as possible, study the greats, and get on stage as much as you can. That’s the only way to get better.

Speaking of getting on stage, was it difficult for you to make the decision to leave school in order to perform more frequently?

Yeah, I waited until the absolute last second where I just had too much work on the road that I absolutely couldn’t just keep going to school. I definitely didn’t do it prematurely. But once I could and needed to, I did. It was absolutely scary to be making that leap and trusting yourself enough to make it in this business, but it’s working out so far.

Who are your comedy icons? Do you have anyone you’ve studied or looked up to for years?

I think Maria Bramford is brilliant and I’ve loved her for so much, ever since I was a kid. I just love everything she does.

Do you see yourself ever making the transition into doing comedic films, or do you just strictly want with stick to stand-up?

Yeah, of course I would love to write and be able to be in my own shows and movies, but stand-up’s definitely my first love. If that’s going then I kind of just don’t need anything else. The only reason you want to do shows and movies is to get people out to watch you do stand-up.

What was it like the first time you ever saw your name on a marquee? Do you remember what building or city you were in?

It was in San Diego where I started. We had a club called Mad House Comedy Club that really helped a lot of us locals get a lot of stage time early on and I had headlined a show there and they put it up on the marquee. Even if you know everybody and have been there a bunch, it’s always really cool to see your name up on a marquee, especially for the first time.

I want to say, being this age, I know people make a very big deal about being a millennial. Do you ever find it difficult for people to take you on or do you think it’s to your credit being this age and having the success you’ve had so far?

I think earlier on when I was even younger, like 22, there were probably clubs that were a little wary to let you headline — but putting anybody up to headline when they haven’t done it before is a risk, so I don’t even know if I can say it was due to age. But I’m sure there were times where it turns people off or older comics off because, you know, I have been really lucky early on so I don’t want to ignore that. But I think being this young has also really helped in a lot of ways because this business loves youth.

When it comes to writing your material, how often do you write? Is it every day?

I try to write every day. I try to write a little bit even if I don’t get anything out of it to keep the muscle sharp. But there are days that I don’t write anything because I’m too busy or I’m just too wiped out, especially lately with all the press I’ve been doing for my special. I mean, there are days where it’s just kind of nonstop all day. By the end, you’ve talked about yourself so much you’re like, “I’ve got nothing left. I’m just gonna lie on the couch and watch something stupid.” But I try to sit down and write something every day or at least put some notes in my phone when I’m out and about.

What is a typical day off for you? I know you’re busy on the road going from state to state, but what are your favorite things to do to unwind after being on the road for so long?

Oh my gosh, I can’t remember the last time I had a day off, I’ll be honest with you. I can tell you my ideal day off, I guess. [laughs]

I like to see a movie in the theater by myself. That’s a nice unwind-y thing. I’ll do that on the road too during the night to unwind. I’ve done that after shows on the road as well. I like that you don’t look at your phone for a couple of hours and it’s dark and it’s easy to get distracted watching something at home. And I think most people are like, “Why even go to the theater anymore?” and I’m like, “It’s because you’re not on Instagram while you’re watching it.” I like to be home and cook and clean my apartment and… I’m really boring! I’m a really boring person. I do this a lot and it sucks up a lot of my life and if I get a moment off, I just want to spend it with my friends or my sisters or my boyfriend. So that’s usually how I’m spending time off, if I have it.

Are there any comedy specials that you yourself have really enjoyed? What’s your favorite special right now on Netflix, for instance?

Oh gosh, I really loved Wanda Sykes’ special last year, Not Normal. And I love all of John Mulaney’s specials on Netflix; they’re fantastic. I know a lot of people who rewatch those a bunch. I’m definitely one of those people.

Would you ever want to become a staff writer? Could you ever see yourself trying for SNL someday or something like that?

Never say never. I haven’t wanted to yet. People always say that — “you should write because you won’t have to travel” — but if I’m not traveling, I’m not getting better at headlining specifically, and I want to be a really strong touring headlining comic so I feel I’ve got to stay on the road. A writers’ room has never appealed to me that much. Again, never say never and maybe when I get older and want to have a family I’ll want that but right now, no. Now I just to focus on touring and stand-up.

What’s your favorite thing about being on the road? Your least favorite?

My least favorite thing is the isolation and my favorite thing is just the amount of work you get done, doing that many shows in that amount of time. And I like getting to know different cities, having my days free to write or explore or whatever that city has to offer.

10 Funny Ladies You Need To Be Watching Right Now

Tags: Taylor Tomlinson , comedy , comedian , Netflix special , touring
Support Feminist Media!
During these troubling political times, independent feminist media is more vital than ever. If our bold, uncensored reporting on women’s issues is important to you, please consider making a donation of $5, $25, $50, or whatever you can afford, to protect and sustain BUST.com.
Thanks so much—we can’t spell BUST without U.