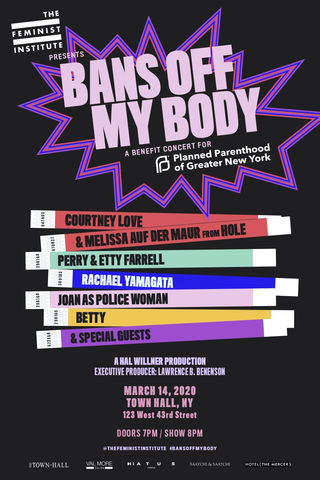 On March 14th at Town Hall in New York City, Planned Parenthood of Greater New York and The Feminist Institute are hosting a benefit concert for gender equality and access to sexual and reproductive health care.

Proceeds will go to Planned Parenthood of Greater New York to support their mission to provide comprehensive, confidential sexual and reproductive health care. The Feminist Institute, whose mission is to collect, digitize and share the rich history of feminist art, humanities, politics and businesses online, will also receive proceeds.

The concert comes at a time when sexual and reproductive health and rights and the important work of Planned Parenthood are under threat. The federal government, state legislatures across the nation and a 5-4 conservative majority of the Supreme Court threaten access to the health care millions of people rely on to live healthy lives.

Doors open at at 7 PM and the show starts at 8 PM. Tickets will go on sale on February 20th at 10am ET and can be purchased here.