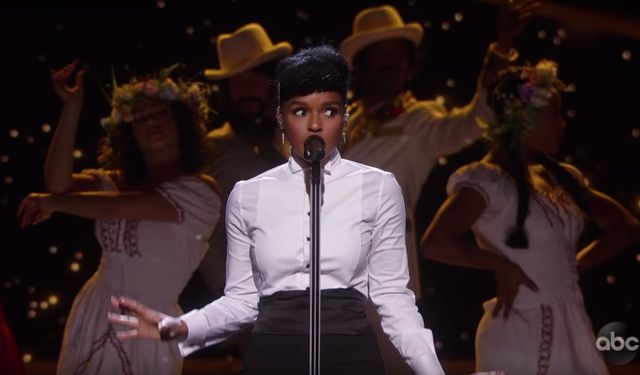 We all knew the 2020 award season was going to be a disappointing time for feminists when the nomination lists began to roll in. Both the Golden Globes and the BAFTAs featured little to no women or PoC nominees, and the beloved Oscars were no different. But just because the nominations were so discouraging didn’t mean feminist celebs weren’t still going to serve. While we here at BUST are still screaming at the academy to name a woman, here are 10 feminist moments we absolutley adored at the 92nd annual Academy Awards. 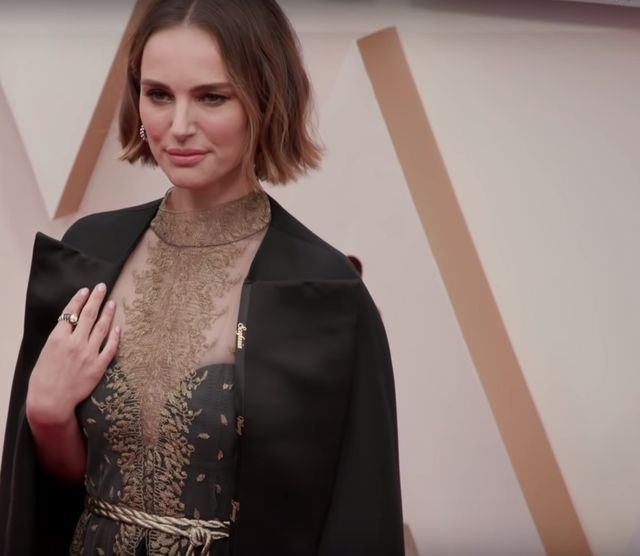 Natalie Portman embroidered her Dior cape with all of the female directors who weren't nominated for #Oscars. Check out her explanation here. pic.twitter.com/kyyo2wVMZf

The talk of the town, or talk of the Internet that is, has to be Natalie Portman’s red carpet look. The 38-year-old star looked stunning in a Dior gown and cape, but that wasn’t exactly what was catching everyone’s eye. Embroidered along the outside of her shawl in golden thread were the names of dozens of women directors who were not nominated for an Oscar this year. Featured on the cape were Greta Gerwig, Lorene Scafaria of Hustlers, The Farewell’s Lulu Wang, Marielle Heller, who directed A Beautiful Day in the Neighborhood, Melina Matsoukas of Queen & Slim, Honey Boy’s Alma Har’el, director of Portrait of a Lady on Fire Céline Sciamma and Mati Diop of Atlantics. All of these women easily deserved an Oscar, and none of them made the list of what turned out to be all-men nominees.

While Portman’s cape was iconic to say the least, we do have to ask her one question: Natalie, if you’re going to champion women directors, why has your production company only ever hired one female director? As Portman explained on the red carpet, “I wanted to recognize the women who were not recognized for their incredible work this year in a subtle way,” which is great! But we’d still love to see handsomecharliefilms feature some more women directors in the future.

2. Billy Porter entertaining at the pre-show 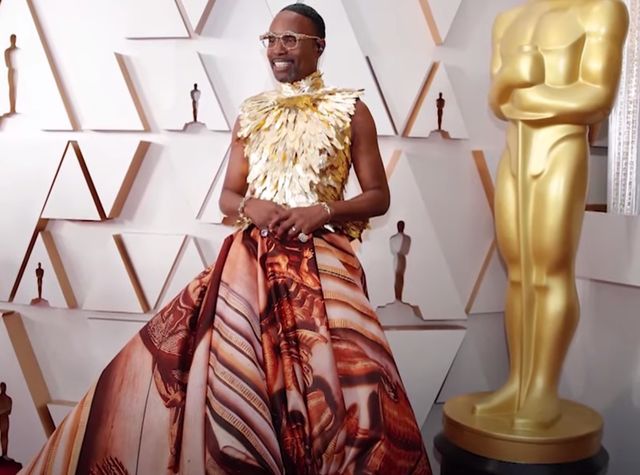 Okay. We’ve decided that Billy Porter is just all around the best part of any award show. The Pose star has become known for his eye-catching outfits, but he also just happens to be the most entertaining person at any function. This year, he was one of the hosts for “The Oscars Red Carpet Show” and dressed in gold from head to toe, Porter made us wish that the red carpet went on forever.

Like Porter, Janelle Monae has become synonymous with completely and utterly serving at award shows. This year, Janelle Monae opened the show and holy shit was it good. Like, potentially the best Oscars opening performance of all time good. The singer and actress began the performance with a rendition of “It’s a Beautiful Day in the Neighborhood,” (uh--we want you to be our neighbor, Janelle!) before jumping into a high powered song about the misfits, the outcasts and the misunderstood who get to have their stories told through cinema. Her and her incredible team of background dancers, who were wearing costumes inspired by some of the year’s biggest movies, inspired us to be loud and be heard. With nods to Hustlers, Midsommer, Little Women and Parasite, Monae celebrated women and PoC as a whole as well as herself, a black, queer artist telling stories. Billy Porter even made a surprise appearance with a rendition of Elton John’s “I’m Still Standing” from the hit movie Rocketman. Could it get any more iconic?

To end the performance, Monae wished the audience a happy Black History Month. We truly could not think of a better, more bad-ass way the open to show.

4. Idina Menzel and Elsas from around the globe

One of the many great live performances at this year's awards was Idina Menzel, who performed a beautiful rendition of “Into the Unknown” from Frozen 2. But she didn’t do it alone. Not only did Aurora get to boast her heavenly vocals live, but nine other Elsa’s from across the globe got to sing portions of the beloved song. The women who provide the dubs for Elsa from Denmark, Germany, Japan, Latin America, Norway, Poland, Russia, Spain and Thailand joined Menzel in a beautiful performance that we won’t soon forget. As Frozen 2 star Josh Gad said when he introduced the performance, “These dubbed versions provide kids and adults everywhere their own special connection to the story and its characters." Hello, inclusivity! 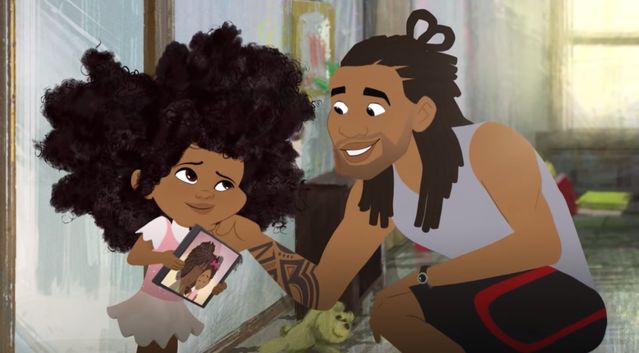 The beautifully animated film about embracing your natural hair won for Best Animated Short in one of our personal favorite moments of the night. Created by Karen Rupert Toliver due to “a firm belief that representation matters deeply," the film features an African-American father learning to style his daughter’s natural hair for the first time in the absence of her mother. What made this win even more empowering was that producers of the film, Gabrielle Union and Dwayne Wade invited DeAndre Arnold, a high school student who was told his dreadlocks violated his Texas school’s dress code, to the ceremonies.

In an industry that too often lacks diversity, this was truly a wonderful moment to witness and something we hope the Oscars will see more of in the future.

The Oscar’s didn’t have a host for the second year in a row this year, but boy, do we wish they had asked Maya Rudolph and Kristen Wiig. The four minutes these two comedic legends were on stage were arguably the best part of the entire night. While presenting the award for achievement in production design, the duo “auditioned” for the many directors sitting in the audience to prove that they weren’t just queens of comedy, but had the chops for serious acting as well. And hey, a little extra feminist moment happened when Nancy Haigh and Barbara Ling won the category for Once Upon a Time in Hollywood.

The SNL veterans returned to present the nominees for best costume design, but opted to sing rather than act out another sketch. Thanks to this, we got to see side splitting renditions of “Cheek to Cheek,” Madonna’s “Vogue” and “The Thong Song.” It’s safe to say that we could have watched them go back and forth for the remainder of the evening.

Icelandic composer Hildur Gudnadóttir won this year’s award for Best Original Score for her work on Joker. During her speech, she took the time to empower creative women of the world. "To the girls, to the women, to the mothers, to the daughters who hear the music bubbling within,” the composer stated, “please speak up, we need to hear your voices." What’s more, Gudnadóttir made herstory in the very same moment when she became the first woman ever to win the award for best score.

8. Learning to Skateboard in a Warzone (If You’re a Girl) wins Best Documentary Short

Another feminist win of the night came when Learning to Skateboard ina Warzone (If You’re a Girl) won for best Documentary Short. The documentary follows a group of female students at a school in Kabul, Afghanistan that not only provides the girls with education and safety, but teaches them how to skate. The director of the documentary Carol Dysinger stated, "This movie is my love letter to the brave girls of that country...They teach girls courage, to raise your hand, to say I am here, I have something to say and I'm going to take that ramp, don't try to stop me."

This was a true moment of girl-power and representation that was hard to come boy at this year’s awards season. This win comes after another incredible victory in that category last year, when Period. End of Sentence, a film about a woman who developed a means to create accessible hygiene products and remove the stigma around menstruation in rural India, won the award. We are beyond thankful that documentaries like these are getting the recognition they so deserve.

This trio of badass ladies, who have also all happened to play superheroes at one point or another throughout the career, reminded us that all women are superheroes during this moment at the Oscars. Larson, Gadot and Weaver even let the audience in on a little secret that while backstage, they started up a secret feminist fight club. Larson and Weaver joked that winners of the fights would get a lifetime supply of deodorant, sushi, and tequila (what more could you ask for?) while poking fun at the system and saying that the losers would have to answer questions from a journalist about how it feels to be a woman in hollywood.

What made this moment even more incredible was that the three were there to introduce Eímear Noone, an irish composer who made herstory last night as the first woman ever to conduct the orchestra in the Oscars’ 92 year history. Yas, queen!

Joaquin Phoenix won the award for actor in a leading role for his performance in Joker. Rather than making a simple speech thanking his team or the academy, however, Phoenix took the time to talk about solidarity and coming together in the face of injustice. The actor noted how the individuals in the room have the unique opportunity of getting to use their voice for the voiceless, and stated that we need to champion commonality during these trying times. He discussed how gender equality, racism, queer rights, indigenous rights, and even animal rights are all one single fight against injustice. As humans, Phoenix noted, we fear the idea of personal change. We have an egocentric worldview and that has made us selfish. The oscar winner reminded us, however, that when you get to the bottom of it, humans are innately creative and can use that creativity to develop and implement systems of change. “When we help each other to grow, when we educate each other, when we guide each other to redemption, that is the best of humanity,” Phoenix stated.

The actor concluded this powerful, unforgettable speech with a quote from his deceased brother, River Phoenix, “Run to the rescue with love and peace will follow.”