Demi Lovato Returns to the Stage, But We Shouldn't Forget Her Twitter Beef with 21 Savage 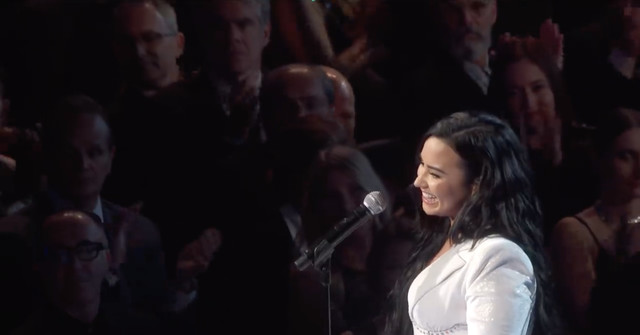 There were many emotional moments during the 62nd Grammy Awards on two Sundays ago. There were all the tributes to Kobe Bryant after his passing, the tributes for Nipsey Hussle, Camilla's father-daughter song, Ariana Grande’s particularly emotional rendition of “Thank U, Next”, and, of course, Demi Lovato’s moving comeback. Lovato performed her new song “Anyone”, written days before her very public overdose in 2018 as her first performance after two years away. Many fellow singers and stars, reacted to her emotional performance.

Wearing a beautiful white ball gown and with tears in her eyes, Lovato had to restart her performance because she got too emotional. She belted out the lyrics to her emotional song that was meant to capture attention and show the brutal reality of addiction. As her song came to an end, Lovato received a standing ovation. “Anyone” is now the number 1 song on US iTunes top songs after she released her heart breaking song. Her performance was the most tweeted moment on Twitter from the Grammys.

Rapper 21 Savage had his own win at the Grammys. His song “A Lot” featuring J. Cole, won Best Rap Song. It was both 21 Savage and J. Cole’s first Grammy wins. Just a few days after 21 Savage released his music video for “A Lot” in 2019, he was taken into ICE custody because he is a British national whose Visa expired. Thankfully, 21 Savage has been released from ICE custody and was able to receive his award. 21 Savage and Lovato have their own history of internet conflict.

As Twitter was reacting to 21 Savage’s ICE detention, Lovato received backlash after sharing a meme about 21, making fun of him, saying, “So far 21 Savage memes have been my favorite part of the Super Bowl.” Many people told her it was not her place to speak on this issue and that it was a very serious issue, in turn, making fun of her for her recent overdose. Artists like Wale, Offset, Lil Yachty confronted her as well.

Wale tweeted in response, “Why is somebody freedom funny ... I don’t get the joke” and  “A lot of people were sending you love, light, prayers etc. When people were making jokes about [you] at a rough time. A lot of people. Bless up.”

A manager of 21 Savage, Kei Henderson, said, “Damn. We was def Demi Lovato fans. When she was going through her shit I remember being on the tour bus and Savage said I hope she make it through that shit. People r weird bro.” and “Just like I didn’t think the memes about Demi’s drug addiction were funny —  I don’t think the memes about Savage are funny. Both are very serious issues.”

She later posted on her instagram story: “Wasn’t laughing at anyone getting deported. I know that’s not a joke, [nor] have I EVER laughed at that. The meme I posted/was talking about was of him [sic] writing with a feather pen. Sorry if I offended anyone. But it’s no excuse to laugh at someone’s addiction let alone their OD.” This was not a real apology. Lovato then deleted her Twitter because of the tsunami of hate tweets she was getting online.

After 21 Savage admitted to actually liking some of the memes that had come out about his detention, many Lovato fans wanted, more like demanded, that Wale apologize for criticizing Demi. He refused to, responding, “Y’all wasting time. Ain’t nobody disrespect her. I said what I said with the level of respect I didn’t receive. This entitlement gotta stop.” and “Imagine me...a black man on my hands and knees begging...this shyt is gross and that entitlement is goin Brazy”.

After all that Demi Lovato has been through, struggling with drug addiction, bulimia, self harm and bipolar disorder, she still was in the wrong for making light of such a serious issue as 21 Savage’s ICE detention, and should have properly apologized. In turn, making fun of Lovato for her OD was also a wrong thing to do. We need to listen to each other and have compassion. We need to remember that other people are going through things and try not to diminish such a serious issue. With that being said, both Demi Lovato and 21 Savage are successful and incredible musical artists that are enacting change and they both deserve the praise they received from the 62nd Grammy Awards.

The Double Standard Of Janet Jackson Vs. Adam Levine