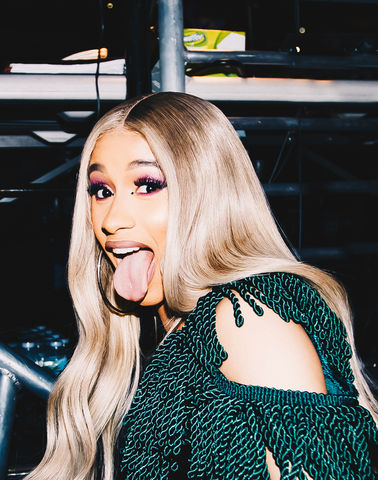 In a string of Tweets, Bronx rapper, Cardi B, has hinted at her desire to become a member of Congress. “I think I want to be a politician. I really love government even tho I don’t agree with Goverment [sic],” she wrote. Cardi B, whose real name is Belcalis Marlenis Almánzar brought up implementing stricter gun laws, having constructive debates across party affiliations and the prospect of her returning to education to “focus up” and eventually “shake the table” in politics.

And this isn’t the first time Cardi B has spoken out about politics and injustice in America. She pulled out of the Super Bowl to support Colin Kappernick who famously kneeled during the national anthem to raise awareness of racial inequality and police brutality towards black people in the country. She also endorsed Bernie Sanders in his 2016 campaign, and in August of last year sat down with him (in typical Cardi B fashion, in a nail salon because “you know I love nails. You know what I’m saying?”) to talk about policies and change. And we cannot forget about the viral rant during the '18-'19 Government Shutdown:

The video titled “Cardi B's nails are juuuust a little different than mine. Our views on the issues are pretty similar” was posted shortly after she asked followers on social media what questions they’d ask a democratic candidate. And Cardi B didn’t hold back. She bluntly asked what Sanders proposes to do about police brutality, low-income, healthcare, DREAMers, DACA, and taxes. Throughout the discussion, it’s abruptly clear that Cardi B is passionate and knows what she’s talking about; there are certain moments when Sanders is visibly impressed and vehemently agrees with the statements she’s making.

Cardi B's nails are juuuust a little different than mine. Our views on the issues are pretty similar. pic.twitter.com/PhA2wXnkpy

Cardi B has equally been as involved online with her followers about her distaste for Trump. In a Tweet about the Iran conflict she said, “Naaaaa these memes are fuckin but shit ain’t no joke ! Specially[sic] being from New York. Its[sic] sad this man is putting Americans[sic] lives in danger. Dumbest move Trump did till date... I’m filing for my Nigerian citizenship.” Other people she’s called out before have been Tomi Lahren (or Tammy, or Toyota or Tabitha).

No matter how much Cardi B has proved her knowledge and concerns around politics, her tweets and involvement have irritated people, because after all what does a ex-stripper, Afro-Latina from the Bronx who has worked several minimum wage jobs to get by know about life and inequality? One of her former high-school teachers, Joan Hill, however, came to her defense in a now viral Facebook post detailing her much higher than average academic record while at school. She wrote, “a) she probably scored higher than you on the US History regents exam and was in my AP got class b) you're not nearly as busy as her, and what have done to advance political discourse in this country? c) She has a national platform and is using it to speak about things that are important... why can't we respect that?” Finishing with a lesson many people should take note of before criticising a woman exercising her fame to spread a positive message “STFU and take a seat.”

Image by Chris Allmeid via Wikimedia

Real-Life Inspiration For 'Hustlers' Sues J.Lo For $40M For Defamation

Cardi B Speaks Out Against Trump's Government Shutdown: "Our Country Is In A Hellhole"