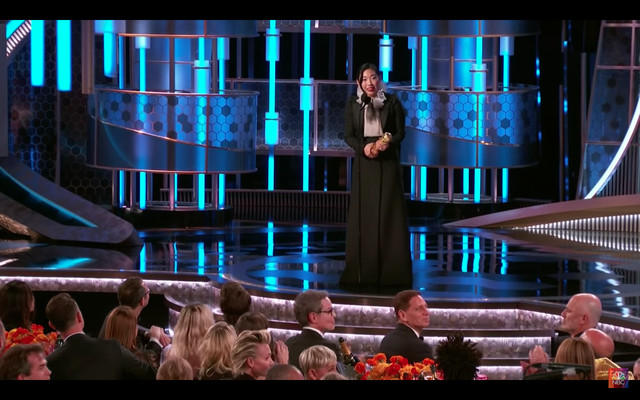 The 2020 Golden Globes Awards aired last night and were hosted by the controversial British comedian Ricki Gervais. It was marked as the 77th annual event held in Hollywood, that gives accolades to deserving figures in the film industry, although it often notoriously overlooks women and minorities with most of the nominations and winnings going to white men. At the beginning of 2020, one would hope this might have changed, and while there were many victories for progressiveness at the show, it still fell a little flat in regards to diversity. Not one woman was nominated for Best Director despite Greta Gerwig’s Little Women, Olivia Wilde’s Booksmart and Lorene Scafaria’s Hustlers, among others doing exceptionally well with critics and box office figures, like Melina Matsoukas Queen and Slim, where no one from the HFPA bothered to even attend a screening. Still, there were definitely moments that stood out and helped ease the unjust history of the Golden Globes. There were even moments that changed the history of the show; here are BUST’s top picks:

No words to explain. But Here’s to everyone next. I need to thank my amazing team, who has been with me on this journey from day one. @kirinstagram @marcusrfrancis @ecduzit @maddielouviere @kovertcreative Wearing: @dior @stuartweitzman @jimmychoo @forevermark

In 77 years it’s absurd that this was a first. Yet, let’s not take away from the fact that it happened and was such an amazing moment in award show wins. Awkwafina is a favorite here at BUST and we couldn’t be more proud. The actress was awarded for her performance in The Farewell, a story inspired by true events about the decision to not tell a dying family member of their diagnosis. Not only did she capture the complex emotions that director Lulu Wang must’ve felt during this time, she learnt how to speak Mandarin for the film. From rapping “My Vag” to portraying a character in a solemn and darker project, Awkwafina has undeniable range.

Writer, director, actress and overall legend, Phoebe Waller-Bridge won two awards for her hilarious and one-of-a-kind show Fleabag. Bridge won both the best Musical or Comedy series along with best Actress in a Musical or Comedy last night. Having once said that she started writing the series around ten years ago, it makes you wonder if the world would have been ready for it then. Thankfully, it is now, and has helped change the way women are written about and shown in comedy: Real and a little fucked up.

There’s something about SNL star Kate Mckinnon that is simply funny. Even picturing her walking down the road or doing something as mundane as drinking coffee, is somehow funny. Upon greeting guests to award Ellen Degeneres the Carol Burnet Award there was laughter throughout the audience. She goes on to read out a list of “things” she has gained from the comedian, including sneakers and wisdom. But the most touching was “a sense of self” where Mckinnon recalls watching Degeneres’s show in 1997 and questioning if she was gay. The show and actress helped identify who she was and gave her the confidence to pursue a career in entertainment that she once doubted would materialize because of her sexuality.

This has nothing to do with feminism, per se, but it's Tom Hanks! Tom Hanks can do no wrong. He is the epitome of Dad, if all dads were great. Within the first few minutes of his speech, he begins to choke up about his wife and children and how blessed he is to have them in his life. Then, he thanked an extensive list of people he has worked with. He also gave some insight into some pinnacle moments of his career, like getting shouted at for being hungover at his acting internship years and years ago, and blames his emotional moments on having a cold. But we know better, he’s just a guy with a heart of gold.

While the actress Michelle Williams was accepting her award for Best Actress in a limited series or motion picture for TV, she took the time to address the importance of a woman's choice when and with whom to have children. She adds that she is grateful to be part of a country where people are able to express their religion no matter what they believe in and the importance of women "from 18 to 118" to vote for policies and politicans that benefit them, just like men have done throughout history. While there are certain aspects that aren't mentioned, like how regardless of the country being founded on freedom of religion there are still hate crimes happening and certain areas of the country have strict abortion laws, her message and tone was one of the key moments of the show.

Beyonce gifted her Instagram followers with a set of pictures of her look like night, who wore a fitted black dress with statement gold ruffled sleeves. Da'Vine Joy Randolph looked like a princess in a hot pink, slit dress, as did Scarlet Johanson, Gwyneth Paltrow, Saoirse Ronan, Billy Porter, Phoebe Waller-Bridge and more.

A post shared by Phoebe Waller-Bridge Source (@phoebewallerbridgesource) on Jan 5, 2020 at 7:29pm PST

When it comes to feathers, #BillyPorter proves more is more #GoldenGlobes

The best part of the night is always getting home ?

#ScarlettJohansson arrives on the #GoldenGlobes red carpet wearing a custom crimson silk faille strapless plunging v-neck trumpet gown, with a dramatic hand draped bow and train at the back. Styled by @mollyddickson ! #VeraWang

And The Worst: Unfortunately, women and POC were, yet again, dismissed for their work

In THREE days, don’t miss the movie that everyone loves. #LittleWomenMovie in theaters Christmas Day. ?️ → link in bio.

Another year, another disappointing line-up for women and minorities in Hollywood. There was a lack of diversity in the categories, even though some women and POC took home awards. There has been an improvement over the years, but it just seems too slow, especially since we are in 2020 and still seeing many firsts for those people in the industry. We’ll keep our fingers crossed for the Oscars next month.

How To Channel Jo March's Look This Winter